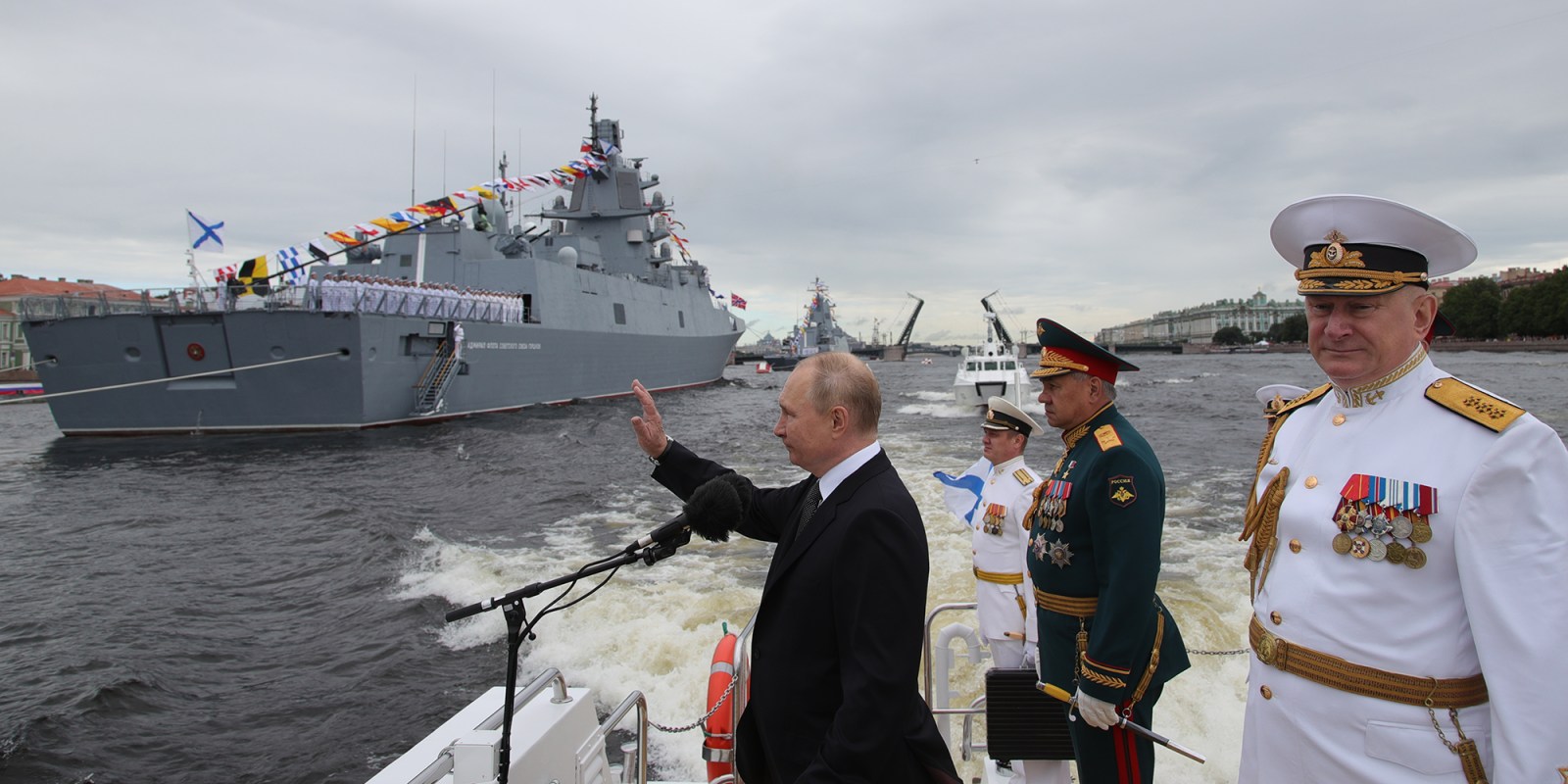 Vladimir Putin said Russia’s navy would soon be fitted with powerful ‘Zircon’ hypersonic cruise missiles, which can fly at five times the speed of sound. He signed an expansive new naval doctrine and vowed to respond ‘with lightning speed to anyone who decides to encroach on our sovereignty and freedom’.

A Ukrainian grain magnate was killed by Russian shelling in Mykolaiv as the southern city sees some of the heaviest bombardments of the war so far. Ukrainian President Volodymyr Zelensky urged civilians in the Donetsk region to evacuate to protect themselves from Russian attacks in what has become a lengthy ground battle.

Russia’s defence ministry said it had invited experts from the United Nations and the Red Cross to investigate the deaths of Ukrainian POWs in the Olenivka detention centre in occupied Donetsk.

With the invasion now well into its sixth month, Russia continues to launch air and missile strikes against military and civilian targets. Shelling continued overnight in the Donetsk, Dnipro and Kharkiv regions. Heavy shelling in Mykolaiv in Ukraine’s south killed at least one person, governor Vitaliy Kim said. In the Donbas ground campaign, Russian forces are likely prioritising offensive operations toward Bakhmut and around Donetsk City, at the expense of efforts to take Siversk and Slovyansk, the Institute for the Study of War said. Ukrainian forces disrupted a Russian ground assault in Kherson Oblast with pre-emptive artillery strikes.

A shipbuilding complex will be developed in Russia’s far east to construct large vessels, and a new ferry line to Kaliningrad will be built in the direction of ports in Ust-Luga and St Petersburg, according to the document.

The decree also says that controlling the activities of foreign states in the waters of the Northern Sea Route is a priority, and envisages a permanent Russian naval presence in the Mediterranean. Named as a major threat to Russia’s security was the US’s “strategic course to dominate the oceans”.

The first ship to export Ukrainian grain since an agreement was reached for the safe transit of vessels may depart as soon as Monday, a Turkish official said.

More than a week after a deal was reached that aimed at releasing millions of tons of Ukrainian grain through three Black Sea ports, no ships have sailed.

The multimillionaire owner of Nibulon, one of Ukraine’s largest agricultural companies, died during Russian shelling in the southern city of Mykolaiv this weekend, according to the region’s governor.

Oleksiy Vadaturskyi and his wife Raisa Vadaturska were killed in their home during shelling that hit several targets, including schools, a sports complex and many residences, governor Vitaliy Kim said in a post on Telegram.

President Zelensky and the nation’s parliament were among those expressing condolences for the businessman awarded Ukraine’s highest civilian honour.

Russia’s navy will start to be fitted with “Zircon” hypersonic missiles in the coming months, Putin said on Sunday in St Petersburg in a speech to mark Russia’s Navy Day holiday.

The location of the ships equipped with the cruise missiles will be determined based on the “interests of ensuring the security of Russia”, Putin said.

The Russian leader didn’t mention Ukraine in his speech. He signed a new, lengthy naval doctrine that named the US as the main threat to Russia and foresaw a strengthening of Moscow’s geopolitical position.

Russia’s defence ministry on Sunday invited experts from the United Nations and the International Committee of the Red Cross to investigate the deaths of Ukrainian POWs in the Olenivka detention centre, according to Tass. It’s unclear what level of access agency personnel will receive.

Thursday night’s strike on the prison camp in occupied Donetsk killed about 50 Ukrainian prisoners. Ukraine and Russia have blamed each other for the deadly attack. Earlier, the Ukrainian branch of the Red Cross said access to the centre hadn’t been granted.

Germany’s gas-storage facilities are gradually increasing capacity despite reduced flows through the Nord Stream 1 pipeline and a lack of alternative supplies via other routes, said the president of the country’s Federal Network Agency.

“We’re going in the right direction,” Klaus Mueller said late Saturday in a tweet, pointing to official data that showed capacity at 68.1% as of Friday, up about 0.3 percentage points from the previous day.

Five people were wounded in an attack on the headquarters of Russia’s Black Sea fleet in Sevastopol in Russian-annexed Crimea. Tass, citing the fleet’s press service, said a low-powered explosive device had been carried by a “makeshift” drone.

The city’s mayor, Mikhail Razvozhayev, blamed the incident on Ukrainian forces. In response, Serhiy Bratchuk, administration spokesman for the Odesa region, called the attack “sheer provocation” by Russia. Ukraine’s liberation of Crimea “will be carried out in another way and much more effectively,” he wrote on Telegram.

Sunday is Navy Day in Russia, a national holiday. President Vladimir Putin was attending a large parade in St Petersburg.

President Volodymyr Zelensky called on residents of Ukraine’s Donbas region to evacuate, saying in his nightly video address on Saturday that many are refusing. “Leave, we will help,” Zelensky said. “At this stage of the war, terror is the main weapon of Russia.”

Deputy Prime Minister Iryna Vereshchuk said the government is enforcing evacuations amid intensified shelling and fears that it’ll be hard to survive the winter.

“The enemy is destroying everything that would help to heat people in winter again and again,” she said in a television interview. At least 200,000 to 220,000 civilians live in areas of the Donetsk region under Kyiv’s control, she said.

Access to the Olenivka penal facility in occupied Donetsk hasn’t been granted, the Ukrainian branch of the Red Cross said, adding that it stands ready to “support the return and transfer of mortal remains” of some 50 Ukrainian prisoners of war killed there in an attack on Thursday night.

“Granting ICRC access to POWs is an obligation of parties to conflict under the Geneva Conventions,” ICRC Ukraine said in a Twitter thread.

Ukraine’s Coordination Centre on Handling Prisoner of War Issues demanded that Moscow provide a list of POWs killed and wounded in Thursday night’s explosion in Olenivka, Donetsk. The centre also seeks to retrieve the bodies of those killed, and has urged the Red Cross and the United Nations to immediately start an investigation.

Moscow has said the deadly attack on the correctional facility was conducted by Kyiv with US-supplied weapons. Russia’s defence ministry earlier published a list of what it said were POWs from Ukraine’s Azov battalion killed in Olenivka.

France’s foreign ministry joined the US and the EU in condemning the attack, which killed an estimated 50 POWs, as well as recent reports of the torture of Ukrainian prisoners. The International Committee of the Red Cross said it has requested access to the prison.

The Russian gas producer Gazprom PJSC halted supplies to Latvia, saying the Baltic nation had “violated the conditions” of its purchases. Flows were cut off on Saturday, Gazprom said in a statement on Telegram, without providing details.

Germany’s economy is more than capable of withstanding the impact of Russia cutting gas supplies, said the CEO of the country’s leading bank.

While a complete halt in Russian gas deliveries would trigger a recession, Europe’s biggest economy can cope with the fallout “no matter how bad it gets,” Deutsche Bank AG’s Christian Sewing said in an interview with the Frankfurter Allgemeine Sonntagszeitung newspaper. DM