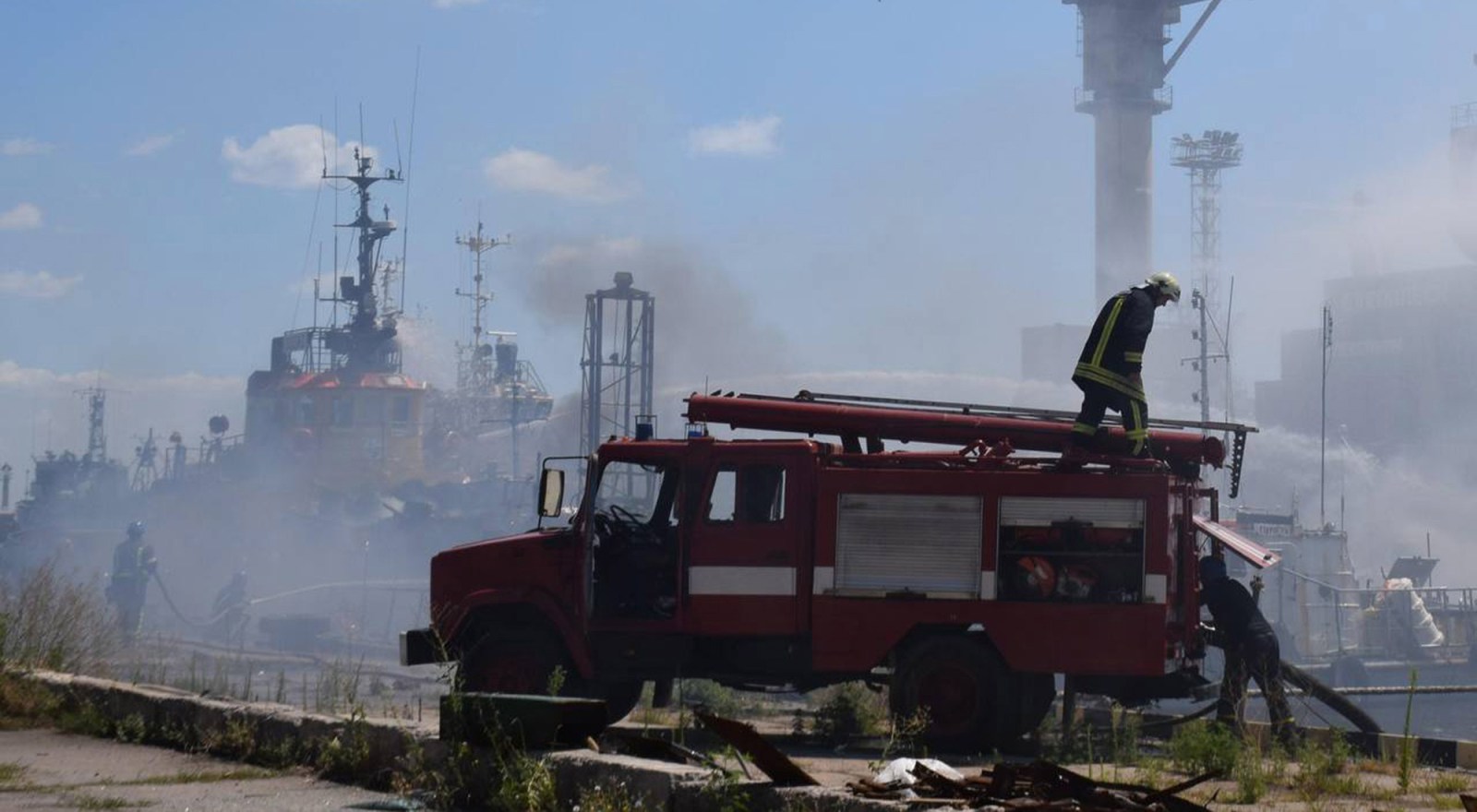 A handout photo released by the Odesa City Hall Press Office on 23 July 2022 shows firefighters working to put out a fire in a sea port of Odesa, southern Ukraine. Ukrainian authorities on 23 July said that the fire at the port was caused by a missile attack. Moscow and Kyiv on 22 July signed a landmark deal to aid grain exports and ease an international food crisis. Russian troops on 24 February entered Ukrainian territory, starting a conflict that has provoked destruction and a humanitarian crisis. (Photo: EPA-EFE / Odesa City Hall Press Office)

KYIV, July 29 (Reuters) - Ukraine stepped up its counter-attacks against Russian forces in the south while Moscow bombed Kyiv's outskirts for the first time in weeks as Europe's biggest conflict since World War Two dragged on with no end in sight.

Fifteen people were injured when missiles hit military installations in Vyshhorod district on the edge of the Ukrainian capital on Thursday, Kyiv regional Governor Oleksiy Kuleba said on Telegram.

“It doesn’t matter with what Russia threatens us; whether it’s air-raid sirens or something else, what is important is that we make other countries fall in love with our Ukrainian firmness,” Zelensky said.

The attack shattered the sense of normalcy that has returned to life in Kyiv since Russian forces abandoned attempts to capture the city in the first weeks of the war, in the face of fierce Ukrainian resistance.

“This was Russia offering greetings on Ukraine’s Day of State Sovereignty,” he said, adding there were concerns about a “second phase of ground operations by the enemy”.

The North district command of the Ukrainian armed forces said more than 20 missiles had been fired at Chernihiv region bordering Russia from a base in Belarus – Russia’s ally.

In the south, Ukraine said its planes struck five Russian strongholds around the city of Kherson and another nearby city, where it is focusing its biggest counter-offensive since Russia’s invasion began on Feb. 24.

The Kherson region, which borders Russian-annexed Crimea, fell to Russian forces soon after they began what Moscow calls “a special military operation”. Ukraine describes Russia’s actions as an imperial-style war of conquest.

Ukraine has used Western-supplied long-range missile systems to badly damage three bridges across the River Dnipro in recent weeks, making it harder for Russia to supply its forces on the western bank.

British intelligence said the strategy was starting to isolate Russian forces in the Kherson region.

“Russia’s 49th Army, stationed on the west bank of the Dnipro River, now looks highly vulnerable,” it said in an intelligence bulletin.

Kherson city was now virtually cut off from the other territories occupied by Russia.

“Its loss would severely undermine Russia’s attempts to paint the occupation as a success,” British intelligence said.

Ukraine says it has retaken some small settlements on the region’s northern edge in recent weeks as it tries to push Russian forces back.

The Russian defence ministry said its planes had attacked a Ukrainian infantry brigade in the far north of Kherson region and killed more than 130 of its soldiers in the last 24 hours.

Kirill Stremousov, the deputy head of the Russian-appointed military-civilian administration running the Kherson region, has also dismissed Western and Ukrainian assessments of the battlefield situation.

Reuters could not verify the battlefield reports.

RIA reported on Thursday that Russian security services had uncovered a group of Ukrainian agents in Kherson who had been paid to pass on the map coordinates of Russian forces there to Ukraine for targeting with artillery.

Two people in the southern seaside town of Koblevo were blown up by a sea mine while swimming despite a ban, Mykolaiv regional governor Vitaliy Kim said on Telegram.

Russia continues to carry out strikes against targets across Ukraine while trying to take control of the entirety of the industrialised Donbas region in the east, comprising the provinces of Donetsk and Luhansk.

Russian forces shelled the town of Bakhmut, which has been cited by Russia as a prime target in its advance through Donetsk, four times, Donetsk regional governor Pavlo Kyrylenko said on Telegram. At least three people were killed and three were injured, he said.

As the fighting rages, international efforts continued to try to reopen Ukrainian ports and allow exports of grain and other commodities.

Allowing safe passage for grain shipments from Ukrain should ease shortages that have left tens of millions of people around the world facing soaring food prices and hunger.

Russia and Ukraine struck a deal last week to unblock grain exports from Black Sea ports, but U.N. aid chief Martin Griffiths said “crucial” details for the safe passage of vessels were still being worked out.

Griffiths was hopeful the first shipment of grain from a Ukrainian Black Sea port could take place as early as Friday. Read full story

Ukraine and Russia: What you need to know right nowRead full story