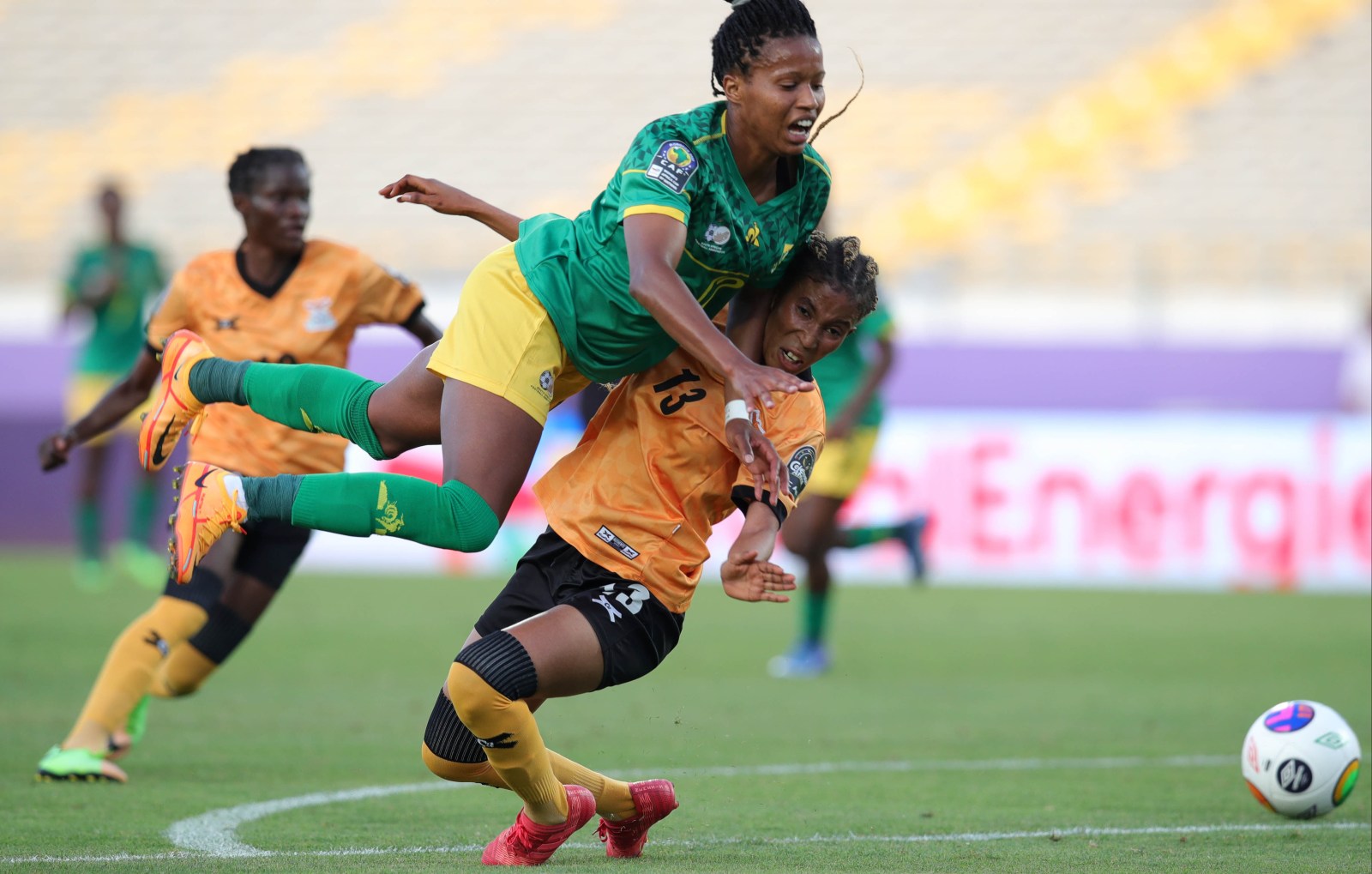 Jermaine Seoposenwe of South Africa is tackled by Martha Tembo of Zambia during their 2022 Africa Women’s Cup of Nations semifinal in Casablanca, Morocco, on 18 July. (Photo: ©Samuel Shivambu / BackpagePix)

This weekend, a successful 2022 Africa Women’s Cup of Nations will show the strides that Africa has made in women’s soccer. However, a large distance has been left to close, compared with the dominant continents in the game.

Hosts Morocco’s Atlas Lionesses take on South Africa’s Banyana Banyana this Saturday, 23 July, in Rabat, Morocco, for the Africa Women’s Cup of Nations (Awcon) final. Awcon 2022 has demonstrated the waning powers of Nigeria’s Super Falcons, while highlighting the growth of soccer nations such as South Africa, Morocco and Zambia.

The African champions (Nigeria boasts a record nine titles in total, following their penalty victory over South Africa in the 2018 edition) failed to make the final for the first time in 10 years during the biennial continental showpiece, after falling to host nation Morocco in the semifinals this year.

Ironically, as is the case in 2022, Banyana Banyana were one of the finalists in the 2012 spectacle – losing to Equatorial Guinea in the final – after having ousted the Nigerians in that year’s semis.

In the Morocco-hosted 2022 edition, the South Africans and Nigerians managed to avoid each other in the knockout stages. Though, as they did in 2018 before losing in the final, Banyana Banyana shot down the Super Falcons in the group phase.

Before the enticing clash, which was both Banyana and the Super Falcons’ opening Awcon fixture in Morocco, South Africa’s coach, Desiree Ellis, afforded the African champions the respect they deserve, saying: “We want to start well and we know it is going to be a tough encounter. They are not champions for nothing.

“They have been consistent over the years and that is one area that we need to improve on; to be consistent in our performances and to be classified among the best.”

In spite of that respect granted to the heavyweight Super Falcons, Ellis’s side followed on from their convincing win over Nigeria – in Nigeria no less – during the inaugural Aisha Buhari Cup, with another assured win over the team that has been the gold standard in women’s football in Africa in recent decades.

The win was a massive statement of intent by the South Africans. Especially considering that as recently as 2016, the duo’s head-to-head record stood at nine wins for Nigeria and just one for South Africa.

The latter’s maiden win came during that 2012 Awcon in Equatorial Guinea. It followed hot on the heels of the southern African nation arresting its long losing streak against the African giants with two draws in consecutive friendly games, which ended 1-1 and 2-2 in June 2012.

As an indication of a possible change of guard, Banyana Banyana’s recent 2-1 triumph meant the West Africans had failed to win in their past four clashes against the South Africans.

Back to the drawing board?

The story of African women’s football has for a number of decades depended on the aesthetic value given to it by the Super Falcons.

However, even as they extended their African record to nine titles in the competition’s current guise during the 2018 showpiece, they were not without significant challenges on their way to a penalty victory over Banyana Banyana.

The Super Falcons delivered a rather lacklustre performance at that tournament. They were defeated by South Africa in their opening group game and required penalty shootouts in their semi and final wins.

According to former Banyana Banyana star forward Portia Modise – who suffered numerous heartbreaks at the feet of the Nigerians – holding onto past glories and superstars has been their undoing.

Modise, who scored 101 goals in 125 games for Banyana Banyana during a 15-year international career, said she was pleased that a new African champion would be crowned in Morocco. The outspoken 39-year-old also implored the Super Falcons to overhaul their squad and to give younger players a chance.

“One thing I see in the Nigerian team is that they don’t want to let go of the senior players. They need to give the young players an opportunity. Experience alone is not going to work,” said Modise during a virtual media event hosted by world football governing body Fifa.

“I see players that I used to play against [playing for Nigeria]. But now I am retired; they are still there. We need to give a chance to the young kids,” continued Modise.

“I am so happy that Nigeria is not part of the final. They have been dominating us for so many years. But it gives them an opportunity to go back home, to go back to the drawing board and to see how to come back with a winning mentality.”

Modise, who is a Fifa ambassador, is hoping that the increase in Africa’s automatic World Cup qualification spots from three teams in 2019 to four in 2023 at the quadrennial spectacle, will help qualified countries attract more financial support from the corporate sector, in order to have a fighting chance against the dominant US – as well as European nations – in future World Cups.

“The game is changing in the minds of a lot of people. It is now left to sponsors that need to take the risk and say they want to grow the women’s game,” Modise told journalists.

Banyana Banyana have qualified for the 2023 edition after making their tournament debut three years ago. They are joined by Nigeria, Morocco and the constantly rising Copper Queens of Zambia.

“The more African teams that qualify for the World Cup, the more we learn. It will make us see where we can improve and the performance we need to give in the World Cup [in future],” Modise added.

“With the four teams that have qualified, it will be up to the federations how much effort and money they put in for the preparations, so the teams can do better and get to the last stages of the World Cup.” DM