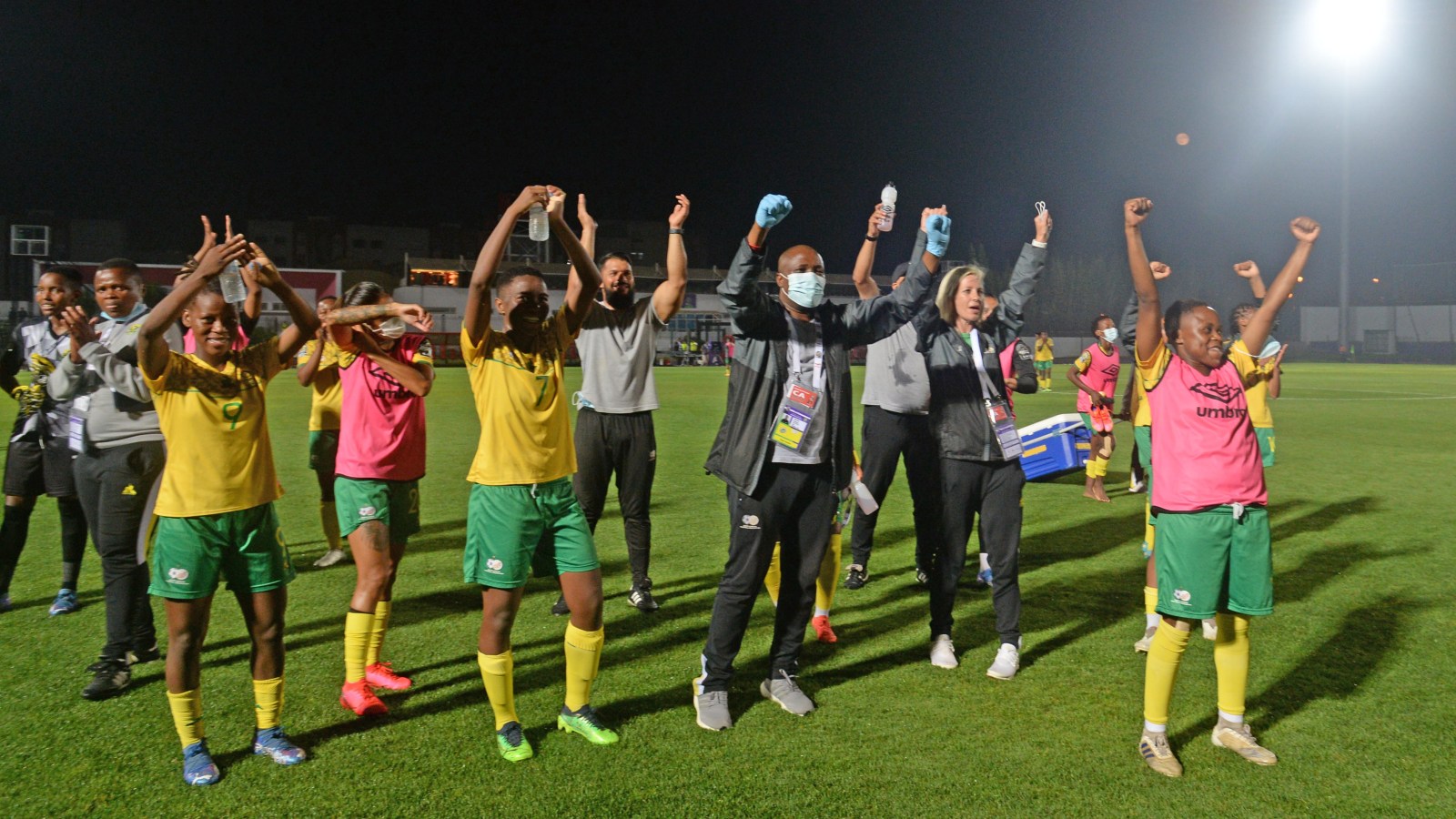 Banyana Banyana celebrates after the 2022 match between South Africa and Tunisia in Rabat, Morocco, on 14 July. (Photo: Ryan Wilkisky / BackpagePix)

Banyana Banyana are now just two games away from clinching a first Africa Women’s Cup of Nations. They face a familiar foe in fellow southern African nation Zambia in the semifinal on Monday.

“Simply because we were licked a hundred years before we started is no reason for us not to try to win.”

These are the words of protagonist Atticus Finch to daughter Scout in Harper Lee’s iconic novel, To Kill a Mockingbird.

Though published over six decades ago, these words ring true in 2022 for South Africa’s senior football team – Banyana Banyana – as they pursue their maiden African title.

In the past, Banyana Banyana have claimed the silver medal five times at the Africa Women’s Cup of Nations (Awcon). They fell marginally short of gold on each occasion, with the most recent Awcon heartbreak coming in 2018.

Then, the South Africans were edged on penalties by record African champions Nigeria.

However, these past disappointments have not stopped the South Africans from dreaming of a continental crown at the 2022 Awcon, currently taking place in Morocco.

A gritty and determined display against Tunisia in the quarterfinals saw the South Africans seal a semifinal spot, while also qualifying for the 2023 World Cup in Australia and New Zealand in the process.

Next is familiar foes, the Zambians, who are also destined for next year’s global showpiece – alongside the other semifinalists, Nigeria and hosts Morocco.

Banyana Banyana coach Desiree Ellis says her side is ready to take another leap towards fulfilling its ultimate target – a first gold medal at Awcon.

“It’s a big game for us [against Zambia]. If we want to achieve another one of our objectives [after World Cup qualification], we have to get a positive result. We’ve played Zambia on many occasions. As much as we know about them, they know about us. But if we execute our plan, we will come away with a positive result,” the 59-year-old tactician told journalists ahead of the crunch tie.

“It [winning Awcon] is our second objective. But we’re taking it one game at a time. If you look too far ahead, you lose focus of the task at hand. And the first task at hand is Zambia… Then we’ll worry about what happens after,” Ellis added.

The team will be hopeful of upping the ante against its neighbours, after a less than classic display as they held off the Tunisians last Thursday.

The sole goal scorer in that slender but massive victory, Jermaine Seoposenwe, told journalists that in the build-up to the tie, the team had felt the pressure of needing to clinch World Cup qualification.

A long-term injury to one of the vital cogs in the Banyana fold, Thembi Kgatlana, prior to the last eight clash was also felt deeply. Soon after, it emerged that a couple of key players were in the grip of Covid-19. All this added to the team’s underpar showing, according to Seoposenwe.

“If you take all that into consideration, plus trying to focus on such a big match – where we were trying to qualify for the World Cup for a second consecutive time – that puts a lot of pressure on a team,” the 29-year-old striker told journalists.

“But we showed character in that game. We stuck it out together. We worked hard for each other. We continued to encourage each other. We were united, even though we weren’t playing well.”

With Kgatlana’s ruptured Achilles tendon ruling her out of the tournament after she showed glimpses of her brilliance in the group stage, Seoposenwe has had to step up and lead the attack.

The Cape Town-born striker, though, is not desperate to emulate Kgatlana’s 2018 heroics and clinch the tournament’s top scorer accolade. Instead, she is pining for a place in the final, no matter who scores.

“As a forward I want to positively contribute to the team. That means scoring goals, so that the team can win. But the objective is to make it to the final. And whoever scores, scores. We aren’t trying to go for individual awards. We’re a team. We want to win this thing as a team. So hopefully I can creatively contribute to the goals of the team. But if I get another goal, so be it. It’s my job,” stated Seoposenwe.

With the plethora of gifted football players that Seoposenwe calls her teammates, she need not worry. When all the parts in Ellis’s ensemble move in unison, they are an unstoppable tour de force.

South Africa’s semifinal clash against the Copper Queens will kick off at 7pm on Monday, 18 July. Nigeria — the defending champions — will lock horns with hosts Morocco three hours later. DM