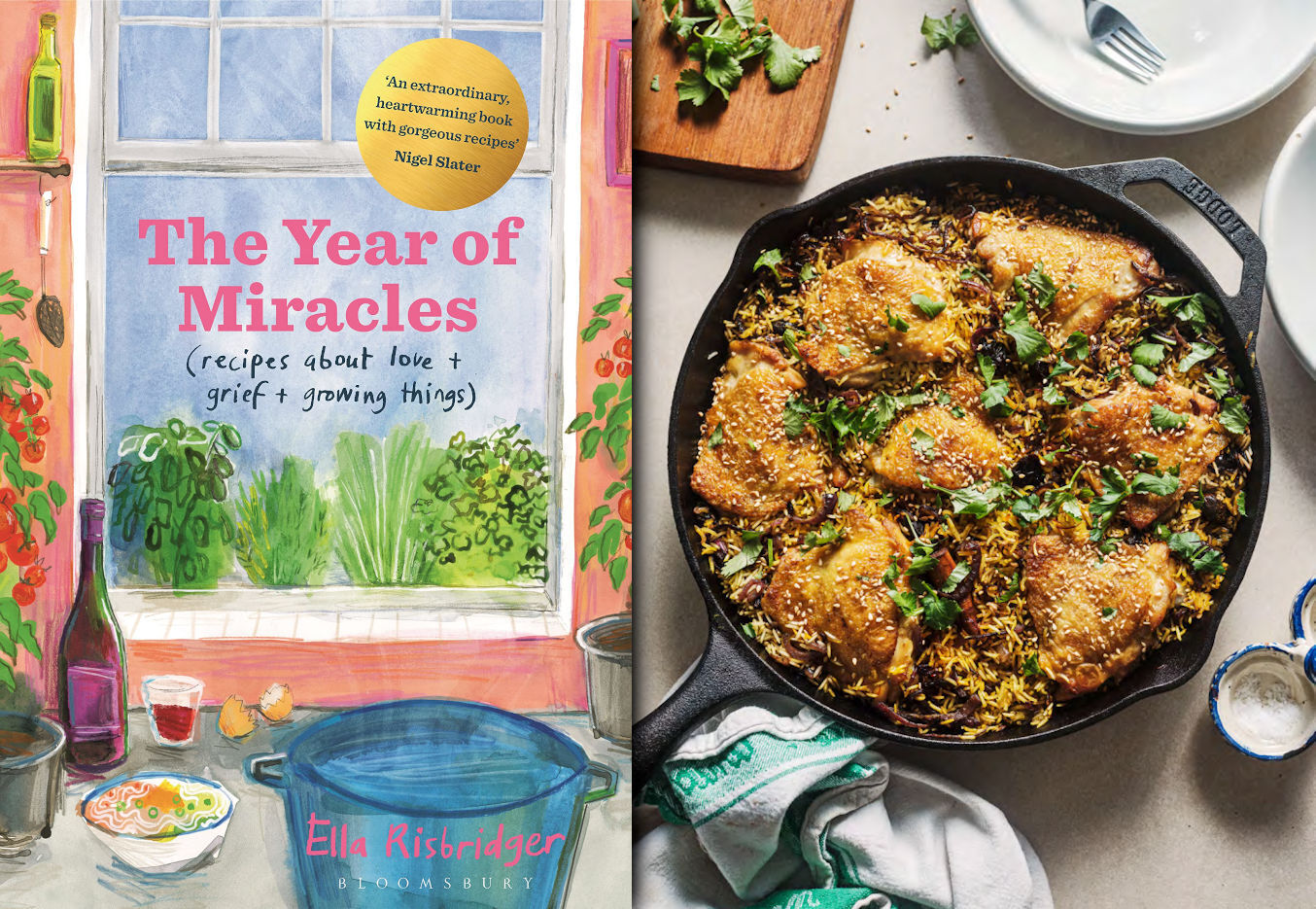 "The Year of Miracles" book. Image: Supplied / The Reading List

‘The Year of Miracles’ by bestselling author Ella Risbridger is more than just a cookbook. Every page is a transporting blend of recipes and life story. This is about what happens when you’ve lived through the worst thing you could have imagined – and how you can still cook, eat, and love.

It takes me longer than it should have done to discover the corner shop.

Jim, in our old life, was larger than life: everyone knew him, and I drifted in his shadow, and Jim’s shadow loomed large over everything we did. When I went to places without him, it was like I had become invisible; when we went to places together, everyone knew him. They gave him his favourite table in every pub, and every meal ended with limoncello and things stricken at random from the bill. The woman in the greasy spoon knew his order by heart (sausage baguette, brown sauce, no butter). The men in the supermarket beneath our house would call out to him in the street when they got the meat in for curry goat. The man at Gaby’s would give him Styrofoam cups of hummus, whatever he ordered: hummus and baklava and extra salt beef. The corner-shop guy started stocking weird ciders he liked, just for him. Jim was simply very difficult to ignore; and more difficult to forget.

“I’ll tell him,” I said. But I didn’t know how to tell the corner-shop guy that I didn’t think Jim was really listening; and that I thought hell was the last thing we needed; and I didn’t know who we were supposed to give it to. It only really mattered that the corner-shop guy had wanted to say something to Jim; and I knew that Jim (or the person Jim used to be) would have been pleased.

Jim loved to be somebody, and he was a corner-shop somebody without ever really trying; and this, I suppose, is why it takes me nearly three weeks to brave ours. So far I’ve been walking all the way to the big supermarket halfway up the street every time we need a pint of milk. There is something deeply comforting in the bland anonymity of it: identical things on identical shelves up and down the country, and nobody to wonder if I used to live in someone else’s shadow.

And then it’s raining again, and I’m running out of time to get the dinner bits, and I think: well, fuck it, got to brave it sometime.

The corner-shop door is ajar, and it smells like spices and doughnuts and someone else’s dinner, and inside is – well, inside is the world.

There are wonton wrappers and parathas and an extensive range of oven pizzas and little tubs of exotic American ice-cream (mini marshmallows! cereal bites!). There are stuffed vine leaves, and rat traps, and twenty-three kinds of pasta. There are racks and racks of Arabic fizzy drinks, the kind I haven’t seen since school. Pickled lime leaves and six kinds of lime pickle. Mrs Naga Hot Pickle. Mr Basil orange drink. So many pickles; and vast jars of pimento-stuffed olives, like a party in the eighties. Sacks of spices – real sacks – and organic micro-herbs and clingfilmed trays of oxtail. A vast range of halal meats. Coriander in huge bunches. The good butter. Pop Tarts. Coco Pops in the big box. Dumplings, frozen and fresh. Even goat, I note, with a little stab. Jim would love this, Jim would love the way it’s all here, Jim would already be in conversation.

Every label is in a different language, a different alphabet, a different script. Everything is everywhere. A world in a corner shop; eternity in an hour. I pick up milk, and chocolate oat milk, and soft fat little pitta breads. I can’t resist black cardamom pods, and a scoop of sour cherries dried to puffy, crinkly sharpness. In the halal meat section I find a packet of chicken thighs, and there it is: dinner.

Is this Ottolenghi? Was this once Ottolenghi? I think so; it feels like a Yotam thing, a Middle Eastern thing; like something a little bit Emirati, Omani, Israeli. It feels like the kind of recipe I cooked once from a book, a thousand years ago, and made it over and over again, twisting it and tweaking it for maximum efficiency.

Listen to this: caramel, char, chicken skin, blistering under the grill; cinnamon, cardamom, cloves; golden, saffron-scented rice, sticking a little in a kind of faux-tahdig to the bottom of the pan for a sticky, crispy secret; red onions tangling for almost an hour in the skillet, with butter and oil; redolent, fragrant, windows steamed up. One single pan. Onions, low and slow. No, slower. Sour cherries, softened in chicken stock, tender and yielding like the chicken itself, the meat falling away from the bone. Think of the onions and the spices, warm and tender. Think of the washing up, or lack thereof. And that, maybe, is what makes this mine and not Ottolenghi’s (if it was his in the first place): I’m a domestic cook, an I-know-I-have-to-clean-the-kitchen cook, a can-I-buy-this-in-the-corner-shop cook. Think of this as a bastardised weeknight version of the real story.

I tip it into two bowls, balance a chicken thigh on each steaming, saffron-scented heap, and call Jo through: bring squash, I tell her, bring squash and spoons.

For 4 (maybe with leftover chicken, maybe not)

Big pinch of saffron + 2 tsp milk (optional; saffron is so expensive that having it as a non-optional ingredient is quite stressful)

If you’re using the saffron – more expensive than gold (and I like that, that flowers are, in the end, worth more than metal) – soak it in the milk and set aside.

Slice the onions into half-moons, and then into half-rings.

Add a tablespoon of the olive oil to your biggest oven-proof heavy-bottomed skillet, and heat over a low flame. When it feels warm (hover your hand over to test – and if you’re too scared to do that because the oil is sputtering, it’s too hot), add the cardamom pods, cumin seeds and cinnamon stick. Toast until you can smell them: warm and inviting and familiar. My grandmother’s house smells like cumin and Imperial Leather and soil, and I miss it very much.

Toss the onions into the skillet and stir them through the spices. Cook for a long time. Longer. We’re talking at least 30 minutes just on onions, 40 even, maybe closer to an hour if you’ve got an hour. Anyone who tells you to cook onions quicker than that is wasting your time, and making you eat bad onions. Stir them occasionally to stop them sticking, but they’ve got oil, and should be fine. Just keep an eye on them.

When the onions are ready – a bit caramelised, a bit sticky – add the remaining olive oil and then the chicken thighs, skin side down. Let the skin get crisp and golden, then flip them over and brown the other side. This is an annoying bit, but necessary: lift the chicken out of the pan, and set aside; it just can’t be done any other way without getting dry rice stuck to the crispy skin. I am sorry.

If using saffron, stir the saffron-infused milk into the stock.

Add the rice to the skillet and stir thoroughly. Add the cherries and stir again. Make little hollows in the rice for the chicken thighs (it’s probably eight of them?) and sit them in, skin side up. Pour the stock directly over the rice, around the chicken, then cover tightly and cook over the lowest heat for about 20 minutes.

Taste the rice. Is it tender? If so, a quick grill, and you’re there. If not, leave for 5 more minutes and try again.

Brush the tops of the chicken thighs with sesame oil, and bash the skillet under a hot grill for 4–5 minutes, or until the chicken skin blisters and chars. Scatter with the parsley, coriander and sesame seeds; serve directly from the skillet. DM/ ML

The Year of Miracles: Recipes About Love + Grief + Growing Things by Ella Risbridger is published by Bloomsbury (R685). Visit The Reading List for South African book news – including recipes! – daily.