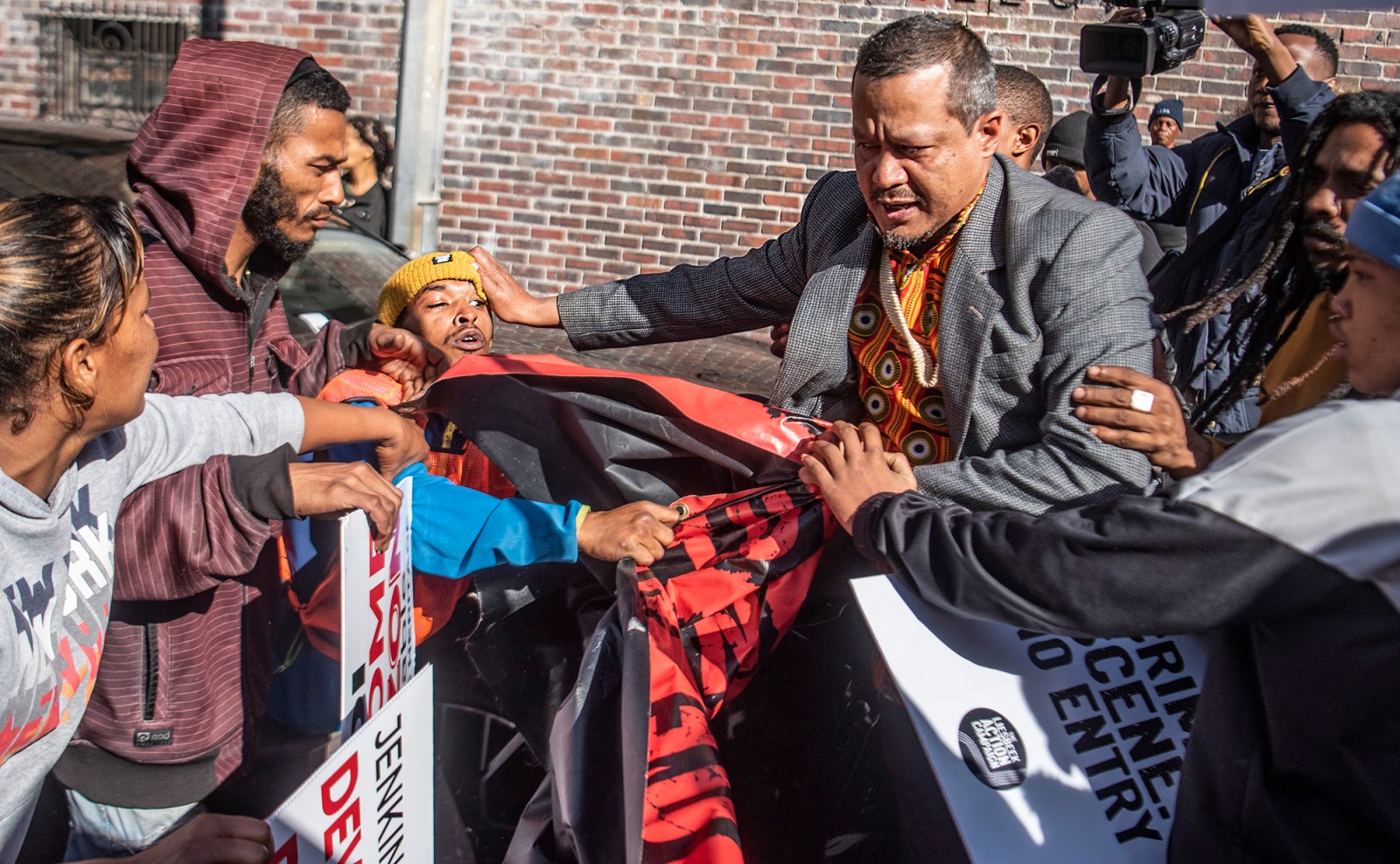 The contempt of court case brought against the developer of the Amazon Africa headquarters by the Goringhaicona Khoi Khoin Indigenous Traditional Council and Observatory Civic Association has been postponed for two weeks. Members of different First Nations groups clashed outside the Cape Town High Court on Tuesday over whether the Amazon development should be permitted to go ahead.

Things became heated outside the Cape Town High Court on Tuesday afternoon as activists and First Nations groups gathered to express their views on the construction of Amazon Africa’s headquarters at the River Club site in Observatory, Cape Town.

A crowd of about 50 members of the Western Cape First Nations Collective – a faction of the First Nations that supports the River Club development – gathered on the court steps waving signs bearing messages such as “The River Club Supports Khoi Heritage” and “Khoi Welcome Amazon”.

Another group, with representatives of the Liesbeek Action Campaign and the Goringhaicona Khoi Khoin Indigenous Traditional Council (GKKITC), arrived later to voice their opposition to the development.

Exchanges between the two groups became heated at times. At one point, members of the WC First Nations Collective chanted “traitors” at Chief Aùtshumao! Francisco MacKenzie, chairperson of the Western Cape Legislative Khoi-San Council, and Tauriq Jenkins, high commissioner of the GKKITC, as they greeted one another outside the court.

Later, a brief scuffle broke out involving members of the WC First Nations Collective and Jenkins.

The assembly of interested parties was triggered by a contempt of court case brought against members of the River Club site developer, Liesbeek Leisure Properties Trust (LLPT), by the Observatory Civic Association (OCA) and the GKKITC.

The OCA and GKKITC filed the contempt of court papers on 8 July, claiming that the LLPT is in defiance of Western Cape Deputy Judge President Patricia Goliath’s interdict order. The order ruled that no further construction could take place at the River Club site until the developer had undertaken meaningful engagement and consultations with affected First Nations peoples.

Other respondents named in the court papers are the City of Cape Town, the Western Cape MEC for local government, environmental affairs and development planning and the WC First Nations Collective.

The case was set to be heard in the Cape Town High Court on Tuesday, but was postponed for two weeks to 27 July, according to Tracé Venter, a spokesperson for the LLPT.  Neither the LLPT nor the GKKITC had provided a reason for the postponement at the time of publishing.

The court order that initially halted the developer’s activities at the River Club site was handed down by Judge Goliath on 18 May 2022. However, just over a month later, on 27 June, an announcement on the River Club’s Facebook page declared that construction on the site would recommence.

“The LLPT’s view remains that this recommencement of work is not in contravention of the law. The legal advice provided to LLPT is that the judgment and orders handed down by Western Cape Deputy Judge President Goliath in Part A of the High Court matter are final in effect and operation, and hence suspended pending the final determination of LLPT’s application for leave to appeal in the [Supreme Court of Appeal],” stated the LLPT.

“The LLPT therefore categorically denies the accusation that it is in contempt of court as there is no basis for this allegation.”

Aside from the LLPT, the Western Cape provincial government and the City of Cape Town have also applied for leave to appeal Goliath’s decision.

However, the LLPT’s argument that their submission of an appeal to the Supreme Court automatically suspends the interdict is incorrect, according to the OCA and GKKITC. The organisations further contend that Goliath’s interdict was an interim order rather than a final one, meaning it is not appealable under the Superior Courts Act.

“We’re quite convinced that [the LLPT are] in full contempt of court… that they have decided to interpret for themselves [that] the fact that they have lodged an appeal to the Supreme Court of Appeals in and of itself now expunges the existing interdict, which in our view, is utterly incorrect,” said GKKITC high commissioner Tauriq Jenkins.

“Further to that, it’s the fact of [the LLPT’s] totally blind, insensitive behaviour… in filling the old Liesbeek channel, which we consider a heritage [site], and in the pursuance of this kind of development on a heritage precinct that is sacred to us.

Jenkins expressed concern that the postponement of the contempt of court hearing will allow the developers to continue construction, causing further damage to the heritage site.

“Our concern is the fact that as each day goes by, there’s intangible heritage that’s being destroyed. And we’re very concerned about the threat of permanency around that damage,” he said.

“We are standing for development, as such, and for the needs of all the people within the Western Cape,” he said.

The development includes plans for a Khoi heritage centre – a precinct that stands to be a “place of pride for all Khoi and San descendants”, according to Chief !Garu Zenzile Khoisan, chairperson of the WC First Nations Collective and chief of the Gorinhaiqua Cultural Council.

“It’s a necessary and critical place of anchorage for our people who are going through the purgatory of their unprocessed pain of not being recognised, restituted and restored in the land of their ancestors,” he said.

“We are… exercising our right of cultural indigenous agency, and that right affords us the right to engage anybody, including a developer, to secure a benefit for our people in perpetuity for us… [and] to ensure that we have a place of sustainable culture and heritage and linguistic praxis.”

However, Jenkins argued that the current development is desecrating and destroying an environmentally and heritage-sensitive area.

“We feel that it goes against the symbiotic relationship of the San and Khoi to desecrate the floodplain, to redirect the river, and to actually tread on the… terrain of our ancestors in this way,” he said.

“I think one of the huge problems here was the extent to which the participatory process [for the development] was quite divisive and definitely not inclusive.”

“We need to identify the sacred sites and build around them. We can’t just put concrete over a sacred site,” he said. DM/MC