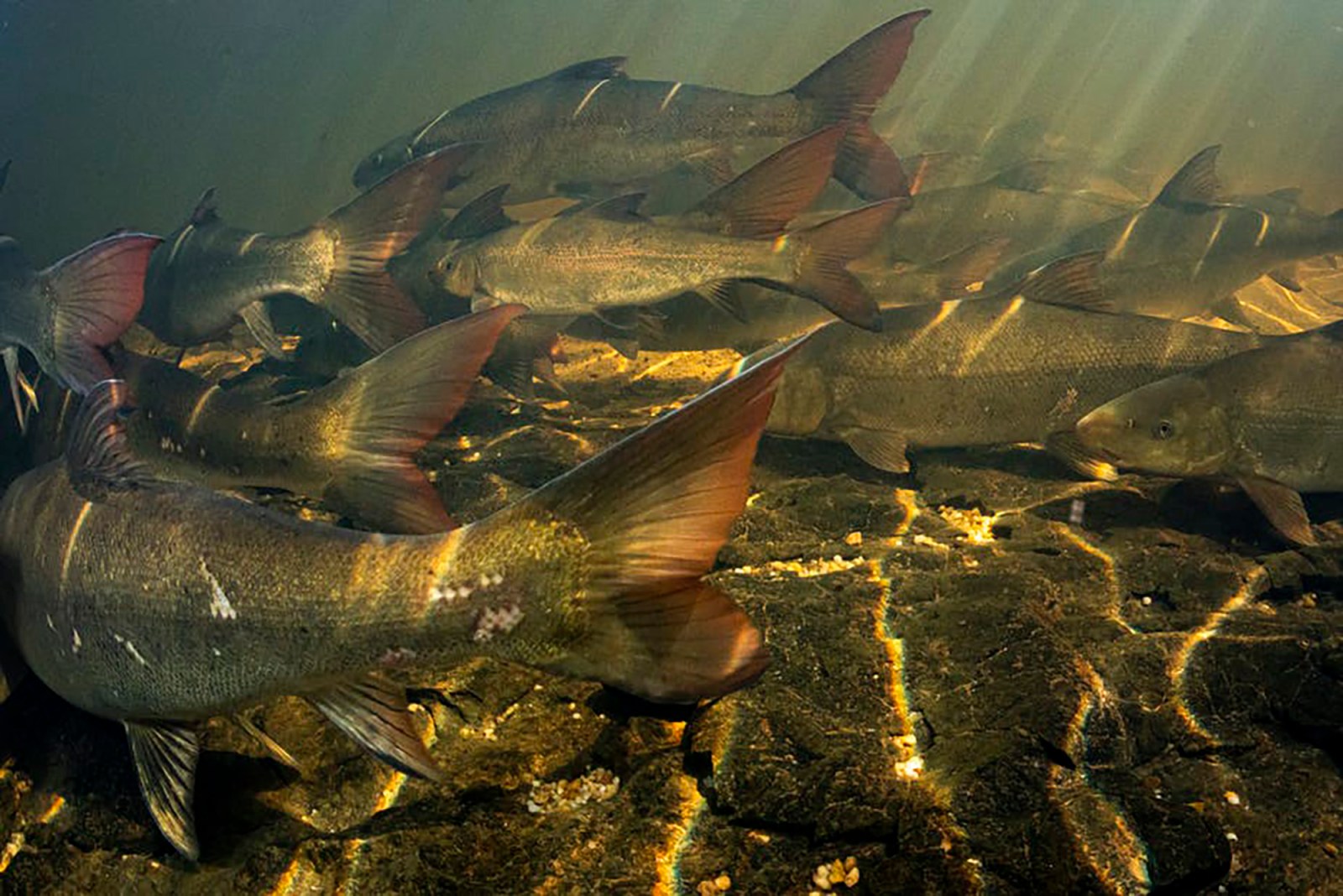 Sandfish migrate to the Biedouw River to spawn. They must swim through fences and over rocks, which takes a toll on them. (Photo: Jeremy Shelton)

Decades of predation by introduced non-native fishes, the construction of dams that block upstream spawning migrations, thirsty alien plants, and the excessive withdrawal of water to supply agriculture are among factors contributing to the rapid decline of sandfish ranges.

Sandfish are migratory freshwater fish found only in South Africa that can grow to over half a metre in length. They sport a pronounced downturned mouth which is used to graze algae off rocks and to grub in mud and sand on the stream bed.

As one of the largest grazers in South Africa’s Doring River system, sandfish keep the rivers clean and the food web balanced. They also act as an umbrella species — protecting them indirectly protects river ecosystems and other species that inhabit them. That’s by virtue of their migratory life cycle: sandfish move over long distances of river at different life stages. To thrive, they need healthy, connected rivers that hold water year-round and don’t harbour alien species.

Unfortunately, their migratory life cycle also makes them particularly vulnerable to human-linked impacts. Sandfish were once abundant and widespread across the Olifants and Doring River systems, but have recently disappeared from the Olifants. Their numbers in the Doring are in sharp decline.

We published a study showing that sandfish numbers in a critical tributary had declined significantly over just five years. Between 2013 and 2018, rangers from the Oorlogskloof Nature Reserve in the Northern Cape province surveyed the fish in the Oorlogskloof River. The results were sobering: a population decline of 92.6% by 2018, led by a 99.6% decrease in numbers of young sandfish.

Catastrophic unseasonal flows due to climate change during the 2013 spawning season likely catalysed this decline. The long drought that followed prevented population recovery. Adding to the problem was the presence of non-native black bass and bluegill sunfish. Where these were found, sandfish were all but absent, effectively isolating the Oorlogskloof sandfish population from those in the Doring River and creating a population sink — a low-quality habitat which only contributes to a population’s decline.

These conditions, ubiquitous throughout the sandfish’s remaining range, have resulted in bringing the species to the brink of extinction.

This sort of knowledge is invaluable in focusing South Africa’s limited freshwater conservation resources where they are needed most.

The historical range of the sandfish has more than halved in the last century. This is the result of decades of predation by introduced non-native fishes, the construction of dams that block upstream spawning migrations, extreme climatic events, and rivers that are drying due to climate change, thirsty alien plants, and the excessive withdrawal of water to supply agriculture and towns in arid regions.

The biggest worry is the lack of juvenile and subadult sandfish in the Doring River. It indicates an ageing population with few, if any, young sandfish surviving the precarious early life stages.

In 2013, a colleague accidentally stumbled on some tiny sandfish in the Doring River and discovered that they were still spawning despite the odds.

It catalysed the first sandfish conservation efforts, which were followed in 2018 by the Saving Sandfish Project. The goal was to better understand the most pressing threats to the sandfish and restore the species to sustainable numbers.

The sandfish has an impressive spawning strategy. It migrates dozens (perhaps even hundreds) of kilometres each year to reach its tributary spawning grounds. Protecting the species, therefore, requires collaboration with landowners whose farms and lands are crossed by the rivers that the sandfish inhabit.

Since the project’s inception, six sets of landowners in the Doring River catchment have transformed their off-stream farm dams into “sandfish sanctuaries”. The safe stop-over habitats for juvenile sandfish are free of alien fish that would eat them. Tributaries that once provided nurseries for young sandfish now dry up completely each year by the end of summer, so these fish are rescued en masse and relocated to the sanctuary dams — a vital step for sandfish to complete their life cycle.

Once sandfish reach a predator-proof size of around 20cm, they are released back into the wild. They are tagged to allow for monitoring of how many survive and return to spawn in later years. The first release took place in 2021, so data from this year’s spawning migration will give us an indication of whether our efforts have been successful.

The project’s approach has been unusual in partnering with farmers who directly influence the rivers. Several fruit and livestock farmers in the Biedouw River valley take water out of the river for irrigation. The conservation project recognises that farming is an equally important part of the landscape and that it is only through collaboration that progress is possible for the mutual benefit of biodiversity and people.

All the stakeholders in the project, be they goat farmers, guest farm owners, or nature reserve management staff, are heavily invested in the outcome of the conservation efforts.

While still in its infancy, this conservation project can already count a series of successes. Thousands of sandfish have been successfully reared in off-stream farm dams, creating source populations for reintroductions for years to come. Over 1,200 nursery-reared sandfish have been released back into the wild. Countless relationships have been forged with landowners, farmworkers and other stakeholders in the Doring River catchment which will ensure the sustainability of the project into the future.

Perhaps most importantly, the Saving Sandfish project has created awareness of the problems of river conservation in this arid region. And it acts as a rallying point for a community of diverse land users who share a common goal: to protect the natural environment for the benefit of all. DM