Defiant Johnson Refuses to Quit, Fires Gove Over Past B...

Boris Johnson clings on despite resignations 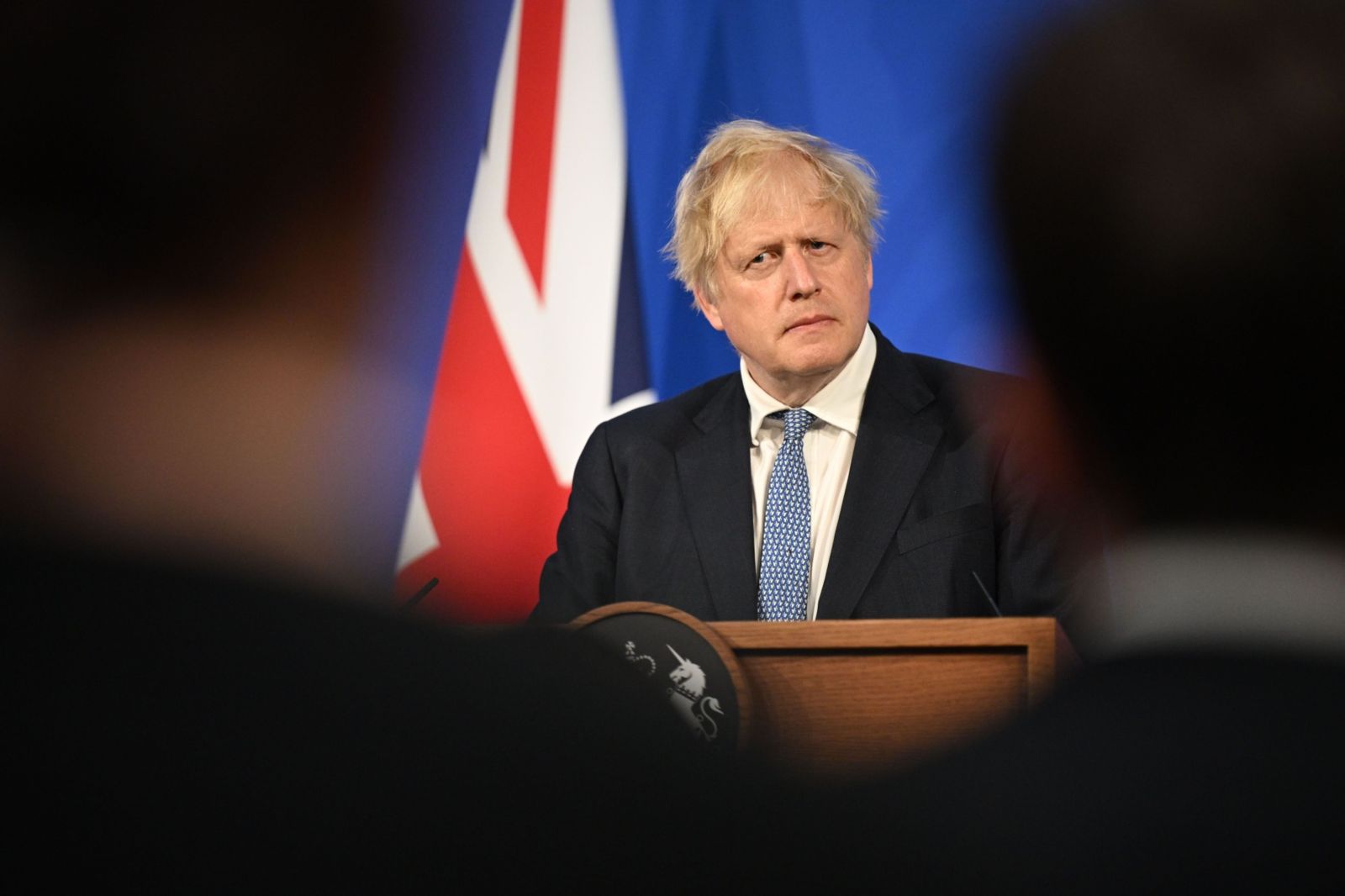 LONDON, ENGLAND - MAY 25: Prime Minister Boris Johnson holds a press conference in response to the publication of the Sue Gray report Into "Partygate" at Downing Street on May 25, 2022 in London, England. (Photo by Leon Neal - WPA Pool /Getty Images)

(Bloomberg) -- Boris Johnson is desperately clinging to power after suffering an avalanche of resignations from his government that’s unprecedented in recent British political history.

Transport Secretary Grant Shapps and Business Secretary Kwasi Kwarteng were among senior figures telling Johnson on Wednesday that his time was up, as more than 40 ministers and aides followed the example set a day earlier by Chancellor of the Exchequer Rishi Sunak and Health Secretary Sajid Javid in quitting.For much of the day, Johnson’s government was in real danger of imploding as his authority ebbed away. But following a meeting of his inner circle, Britain’s wounded prime minister went on the attack, firing Michael Gove — one of the Cabinet’s remaining big hitters — in what one official described as revenge for his attempt to remove the premier and a past act of betrayal.On an already extraordinary day, the move sent shock waves through Westminster. The two men have history; Johnson’s bid for power after the 2016 Brexit referendum was derailed at the last minute when his fellow campaigner for leaving the European Union withdrew his support.

Yet Gove had responsibility for delivering one of Johnson’s signature policies, to “level up” left-behind areas of the UK, many of them former Labour “Red Wall” heartland constituencies that switched to Johnson’s Tories in 2019.

Removing him comes across more as a scorched earth approach than considered policy, with his Tories in open revolt against him and more resignations sure to come. Secretary of State for Wales Simon Hart and Health Minister Edward Argar quit late Wednesday after Johnson’s plan to stay on was reported, with Hart saying that it’s too late to “turn the ship around.”

Tonight I handed in my letter of resignation to the Chief Whip. pic.twitter.com/MccLho3kKk

“It’s a big gamble for Johnson because Gove has the support of a large part of the parliamentary party, and he is also representing the key department that is politically sensitive to holding on to the Red Wall,” said Tim Bale, professor of politics at Queen Mary, University of London. “But I doubt this is about policy; it’s more about revenge for 2016.”

And even as Johnson tries to fight back, another danger is looming: Rebel Tories are determined to hold another vote on his leadership as soon as next week. Having narrowly failed to oust him last month, they are confident of having the numbers to finish the job this time.

The math is certainly not in Johnson’s favor. If 32 more of his MPs had voted against him in June, his premiership would have ended. The number of resignations in the last 24 hours already exceeds that.

In Parliament, though, Johnson made clear that he had no intention of stepping down and told lawmakers he regards his mandate for power as coming from voters who handed him a thumping general election victory in 2019.

“Frankly, Mr. Speaker, the job of a prime minister in difficult circumstances when he’s been handed a colossal mandate is to keep going and that’s what I’ll do,” Johnson said.

An ally of Johnson said the prime minister would rather be dragged out of Downing Street, and that Brexit Opportunities minister Jacob Rees-Mogg and Culture Secretary Nadine Dorries were among those telling him to stay. Johnson sees a Tory leadership contest would mean chaos at a critical time.

Instead, Johnson is trying to present the latest turmoil as another reset of his government to try to win back support. Newly appointed Chancellor of the Exchequer Nadhim Zahawi is working on a speech promising tax cuts and deregulation, the ally said.

“He’s up for a fight,” James Duddridge, one of Johnson’s parliamentary private secretaries, told Sky News. “He’s going to make some changes.”

But the scale of the Tory unrest makes survival a tall order. Giving his resignation speech in the House of Commons, Javid pulled no punches about problems he said start at the top of the Tory party.

“We have reason to question the truth and integrity of what we’ve all been told,” he said. “At some point we have to conclude that enough is enough.”

Johnson can no longer rely on some of his trusted allies, including Shapps, who the prime minister frequently relies on to help put out fires in his government and handle sensitive media appearances. Late Wednesday, another loyalist, Attorney General Suella Braverman, told ITV’s “Peston” show that the premier should step down. She went on to say she’d stand in any leadership contest.

The sheer volume of resignations leaves vacancies that will be hard for Johnson to fill from the back benches, given more than 40% of his MPs opposed him in last month’s confidence vote, and many more have since changed their mind.

That vote theoretically left him immune from another challenge by his MPs for a year, but the powerful 1922 Committee of backbench Tories, which organizes such ballots, could change its rules to allow another one sooner.

Earlier Wednesday, Johnson gained at least some respite when the committee decided not to change its rules immediately, instead leaving the decision to a new executive, set to be elected Monday.

The new executive will then meet Tuesday to decide whether to change regulations — and a vote looks likely next week. Johnson has vowed to fight any leadership challenge, and his press secretary told reporters he also expects to win.

That would be a remarkable outcome even for the man known in British political circles as the “greased piglet” for his ability to evade trouble.

Johnson’s position has been in jeopardy for months amid a succession of scandals including “partygate,” which saw him become the first sitting prime minister to be fined for breaking the law in office.

But Tory anger snowballed in the past week as it emerged the premier promoted an MP, Chris Pincher, to a senior government role in February despite knowing of a formal complaint into inappropriate behavior in 2019.

Pincher quit last week amid similar, fresh, allegations, and Johnson’s failure to come clean quickly enough about what he knew and when about Pincher’s conduct drew criticism from across the party, with Tories openly questioning the honesty and integrity of the premier and his team.

“Treading the tightrope between loyalty and integrity has become impossible,” Javid said.

–With assistance from Ellen Milligan and Emily Ashton.