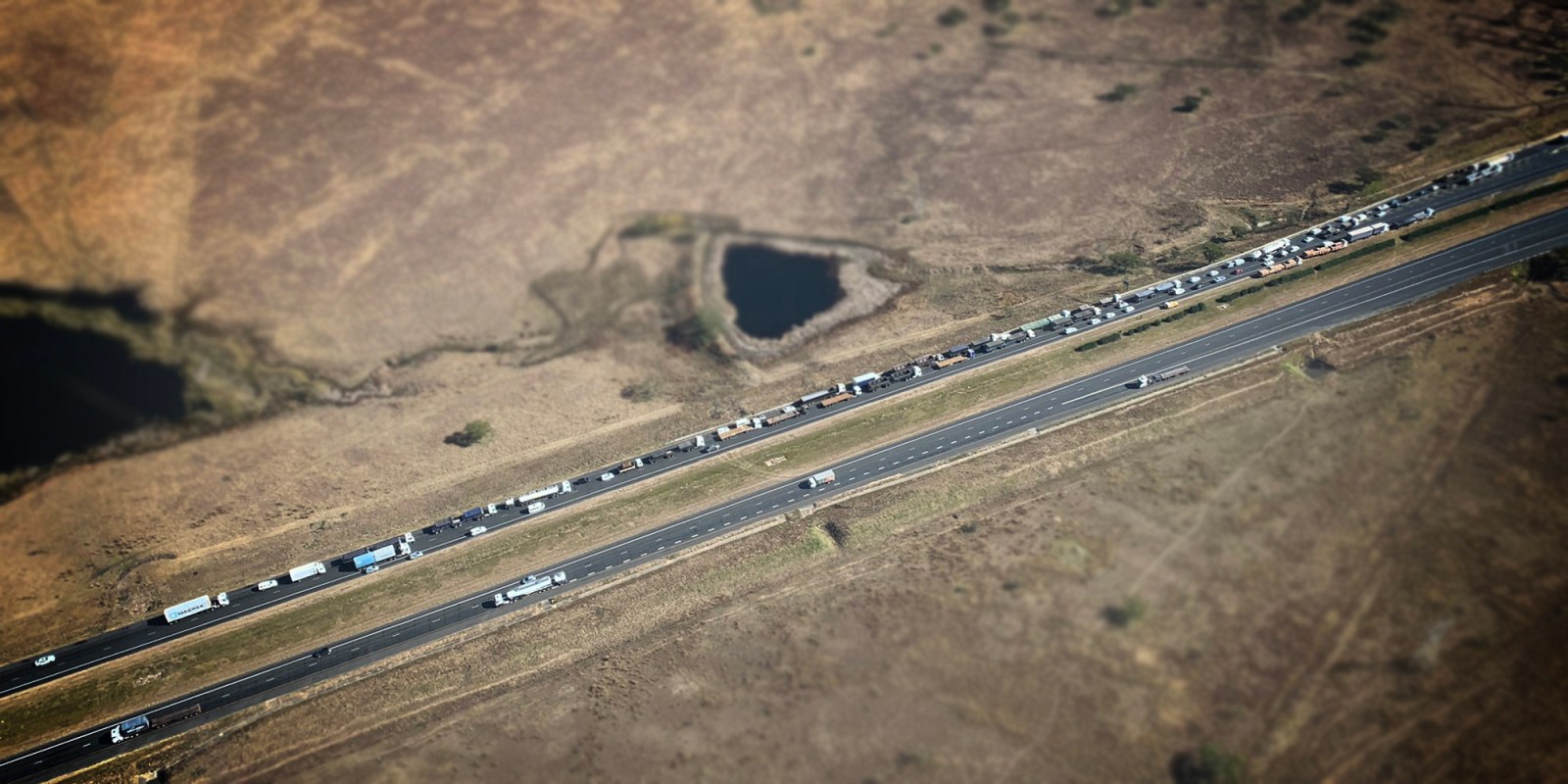 Truck drivers and trucking companies have not been won over by a government action plan aimed at tackling tension on the highways.

The “11-point action plan” announced on 20 June by an interministerial transport committee has been greeted with doubt and trepidation by truck drivers and some trucking industry insiders.

The action plan is a response to tensions and instability in the sector, which culminated in last week’s blockages of national routes, including the N3 near Van Reenen’s Pass, by truck drivers protesting against the hiring of foreigners.

The plan calls for the urgent appointment of a trucking industry task team, enforcement of visa requirements for immigrant drivers, a relook at foreign driving licences, registration and regulation of trucking companies to ensure they comply with labour laws, amendment of national road-traffic regulations, a review of cross-border road transport regulations and an integrated law enforcement operation.

The All Truck Drivers Foundation (ATDF) has taken partial responsibility for the mayhem.

Many local drivers said they doubted the government would be able to enforce regulations and defuse tensions in the industry.

Foreign drivers said they feared the new regulations would increase xenophobic attacks and other incidents and would result in traffic officials demanding more bribes.

Since the collapse of the country’s rail system, about 80% of South African import and export goods are carried by trucks, according to the Road Freight Association (RFA). But the industry has been unstable, with blockades and the burning and looting of trucks over the past few years. The ATDF and other drivers say the trouble is caused by rogue elements in the industry hiring foreign drivers and exploiting them by making them work long hours on low pay.

Oupa Mashego, a Johannesburg-based driver of an 18-wheeler truck, said that unless the government was able to implement its laws, the unrest would continue.

“Drivers are saying we have been talking to the government for years but government officials don’t care. That is why drivers decided to block the road so that the government can listen to us,” he said.

Other drivers say neighbouring countries such as Namibia, Zimbabwe and Botswana have stringent laws and regulations prohibiting foreign drivers from working in their countries.

“But here in South Africa, it’s a banana republic and everyone can do as they like,” said a 49-year-old Durban driver, who asked not to be named.

“In our company, for example, all the drivers were South African 10 years ago. But today we have 12 foreign drivers and only two of us are South African. And, even there, our employer always threatens us. He often says he is going to fire us because we have a bad attitude and we are demanding, we want too much time off. He says foreign drivers earn less and are hard-working.”

On 22 June, several trucks were parked at Durban harbour, waiting to offload goods. Some drivers were foreigners but none was willing to speak on record, fearing retribution from locals.

A 37-year-old Zimbabwean driver said he was caught up in the Van Reenen’s Pass blockade last week and, like other foreigners there, feared for his life. However, the protesters did not harm anyone.

“Only a few foreign drivers had their keys taken away and these were used to block the highway. The striking people told us we must tell our bosses not to use us against them, otherwise we will be targeted.”

Another Zimbabwean driver said: “I arrived in South Africa about six years ago because I was told there were job opportunities here and the pay was much better than what we had in Zim. I did not know there was so much unrest. If I had known, I would not have left my work and come here.

“Now we are stuck here. South Africans accuse us of taking their jobs and, on the other hand, the bosses are demanding us to work hard and work overtime or else.”

DM168 tried without success to obtain comment from companies that drivers accused of employing undocumented foreigners or not complying with the law.

One owner said they feared being victimised by both drivers and the government.

“Look, I’m running a small operation of eight trucks and I am still paying off most of my fleet. I am seeking people who will help me to grow this business. All I can say is that some of the foreign drivers are dedicated to their jobs, while the South African drivers have too many issues,” he said.

The ATDF’s acting chairperson, Mandla Mngomezulu, warned in a News24 interview that there would be more road disruptions if the government failed to address grievances.

“We have been fighting for so long with the government regarding the issue of foreign nationals. There is a document we have agreed on, the 11-point implementation plan, and I think that it is going to give us a guideline in terms of what is going to happen.”

Nicholas Ngqabutho Mabhena, the chairperson of the Zimbabwe Community in South Africa and an executive member of the African Diaspora Forum, said both local and foreign drivers must unite to fight for common goals.

He said local drivers were angry about companies breaking the law and employing migrant drivers on low wages.

Drivers with the necessary papers and already in the industry must be accommodated and protected, he said. But companies employing illegal or undocumented foreigners must be dealt with harshly.

“Our view is that the solution lies in both South African drivers and migrant drivers working together at forums such as trade unions to solve problems in this industry.”

Gavin Kelly, head of the RFA, told DM168 his organisation was trying to find solutions.

“This action plan is not rocket science… it is not something new. We have been proposing similar points since the interministerial task team was established in 2018. If the government implements its laws firmly, we will not have further troubles,” he said.

“We are deeply concerned that this plan will not be implemented. The government needs to understand that to bring stability… they need to implement legislation and put in a monitoring mechanism so those breaking the law will be caught.”

Kelly admitted that rotten apples in the trucking industry did not want to comply with the law, exploited all drivers and failed to register with the bargaining council, the Unemployment Insurance Fund and other official bodies.

“They must be dealt with accordingly,” he added. DM168