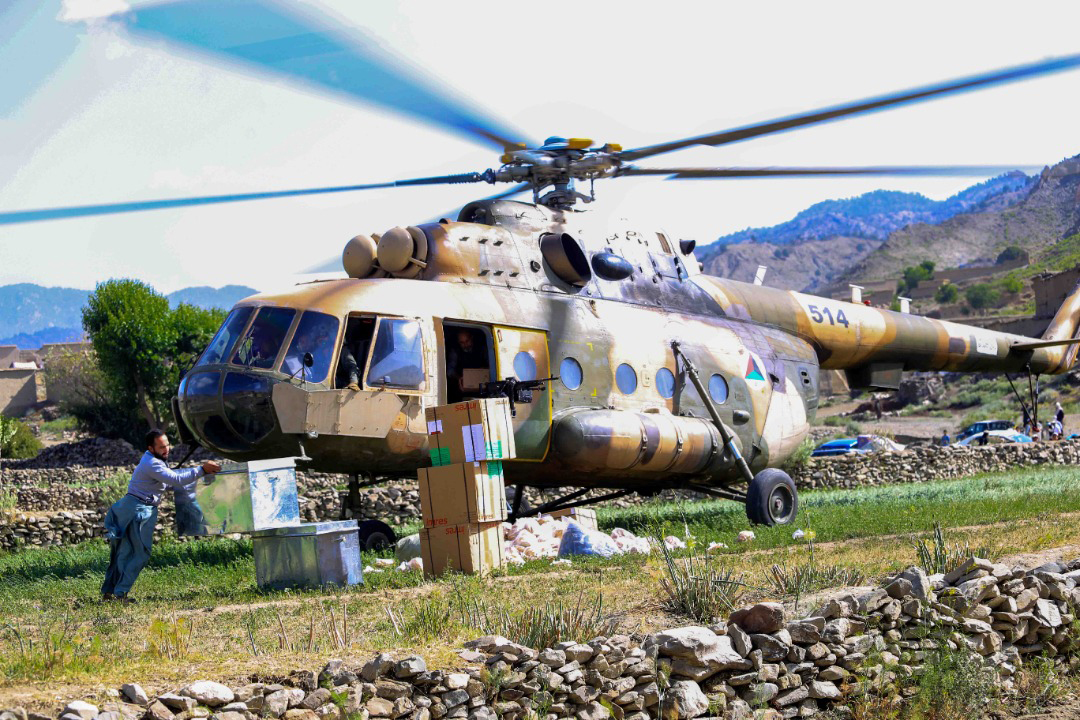 Volunteers unload medicines and other items brought by Afghan Minister of Refugees Khalil Ahmad Haqqani (not pictured) during his visit to the earthquake-affected Gayan village in Paktia province, Afghanistan, 24 June 2022. More than 1,000 people were killed and over 1,500 others injured after a 5.9-magnitude earthquake hit eastern Afghanistan before dawn on 22 June, Afghanistan's state-run Bakhtar News Agency reported. EPA-EFE/STRINGER

KABUL, June 24 (Reuters) - Afghanistan lacks the medical supplies to treat those injured in an earthquake that killed 1,000 people this week, a senior official said, as an aftershock on Friday killed five more.

Authorities earlier ended a search in remote southeastern mountains for survivors of the 6.1 magnitude earthquake that struck early on Wednesday near the Pakistani border, about 160 km (100 miles) southeast of Kabul, the capital.

Friday’s aftershock, in almost exactly the same place, was of magnitude 4.3, the U.S. Geological Survey said. A health ministry official said it killed five people, but there was no immediate word on the extent of new damage and injuries.

About 2,000 people were injured and 10,000 homes partially or entirely destroyed in Wednesday’s earthquake, Mohammad Nassim Haqqani, a spokesperson for the disaster ministry, told Reuters.

“The health ministry does not have enough drugs,” he said. “We need medical aid and other necessities because it’s a big disaster.”

The epicentre of the earthquake was in a region of arid mountains dotted with small settlements that was often the scene of clashes during Afghanistan’s decades of war.

Poor communications and only very basic roads have hampered relief efforts in a country grappling with a humanitarian crisis that deteriorated sharply after the Taliban took over last August as U.S.-led international forces withdrew.

The disaster is a major test for the hard line Islamist rulers, who have been largely isolated, shunned by many because of worries about human rights and cut off from much direct international assistance because of sanctions.

On Thursday, Japan, South Korea, Taiwan and the United Arab Emirates all said they planned to send aid. Supplies from Pakistan have already crossed the border.

India, which has strained ties with the Taliban, said it had sent 27 tonnes of supplies on two flights to be handed to international aid agencies.

“Four decades of conflict and instability in Afghanistan have left millions of people on the brink of hunger and starvation,” its spokesperson, Shabia Mantoo, said on Friday.

Another U.N. body, the World Health Organisation, has also warned that the diaster could worsen outbreaks of cholera already rampant across Afghanistan.

About 500,000 people were already experiencing symptoms of cholera in May, said Dr Dapeng Luo, its representative in Afghanistan.

Speaking before Friday’s aftershock, disaster official Haqqani said the search for survivors had been called off, some 48 hours after the earthquake.

“The search operation has finished,” he said, but did not elaborate on the reason. Elsewhere, people have been pulled alive from the rubble of earthquakes after considerably longer periods.

Large parts of South Asia are seismically active because a tectonic plate known as the Indian plate is pushing north into the Eurasian plate.

In 2015, an earthquake struck the remote Afghan northeast, killing several hundred people in Afghanistan and nearby northern Pakistan.