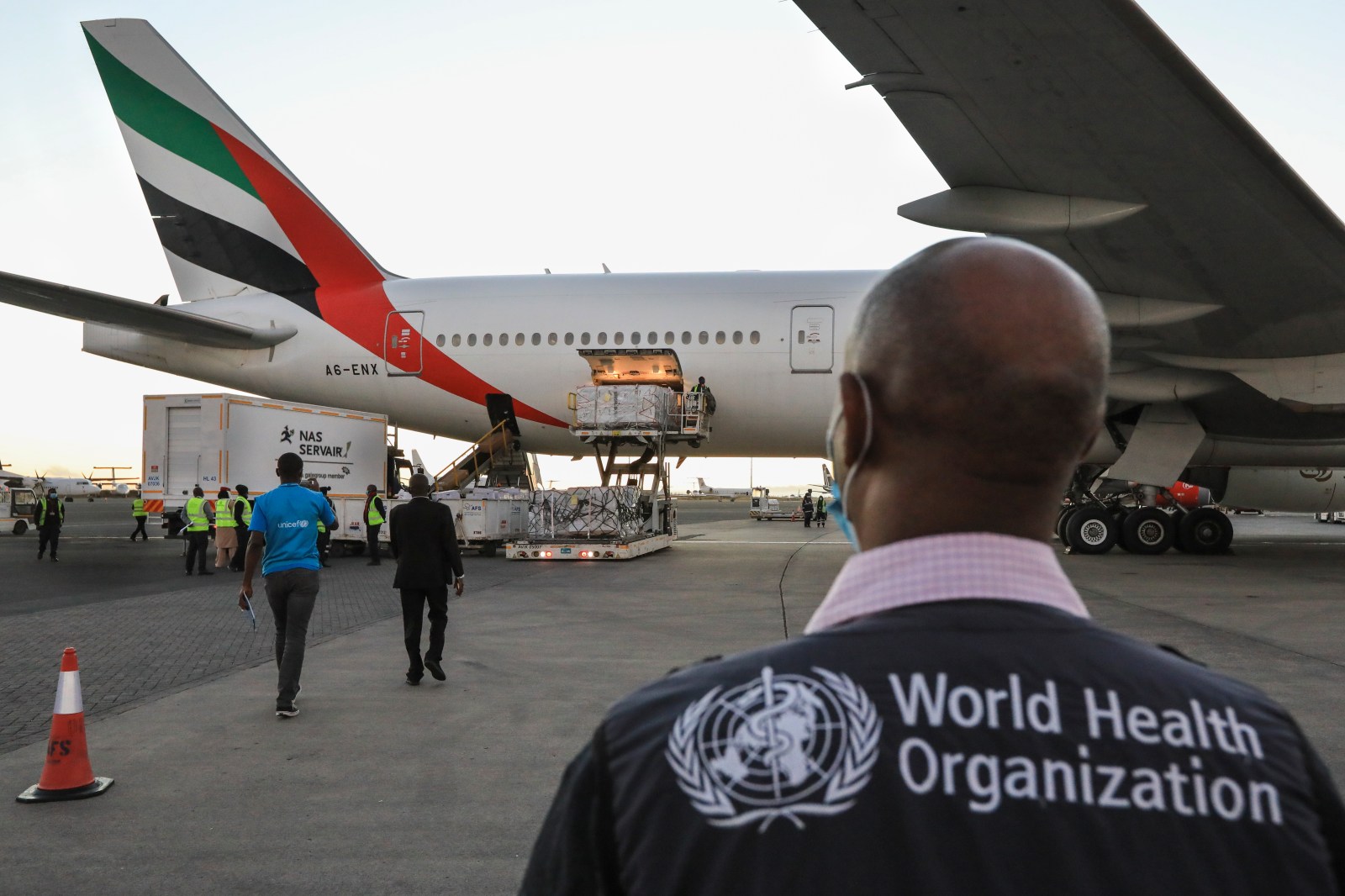 An official (R) from the World Health Organization (WHO) looks on as some of the 880,460 doses of Moderna Covid-19 vaccines (L) are offloaded upon their arrival at the Jomo Kenyatta International Airport (JKIA) in Nairobi, Kenya, 23 August 2021. The vaccines are the first shipment of 1.76 million doses donated to Kenya by the United States via COVAX facility. Kenya continues to receive more vaccine donations from different countries and organizations as it tries to contain the current fourth wave of infections being driven by the contagious Delta variant. EPA-EFE/Daniel Irungu

LONDON, June 22 (Reuters) - Leaders of the global scheme aiming to get COVID-19 vaccines to the world's poorest are pushing manufacturers including Pfizer PFE.N and Moderna MRNA.O to cut or slow deliveries of about half a billion shots so doses are not wasted.

While at first the initiative struggled for shots as wealthy nations snapped up limited supply, donations from those same countries later in 2021, as well as improved output from manufacturers – alongside delivery challenges and vaccine hesitancy in a number of countries – has led to a glut of vaccine in 2022.

“COVAX has called for manufacturers to acknowledge the global oversupply situation, and support collective efforts to meet the timing of countries’ needs and avoid unnecessary wastage,” said a spokesperson for Gavi, the Vaccine Alliance, which runs the initiative alongside WHO.

Gavi wants manufacturers to either reduce the size of the initial orders or at least “re-phase” them, meaning they are delivered at a later date that is more aligned with when countries need them.

Future negotiations might also include getting the variant-specific vaccines currently being tested by manufacturers including Moderna and Pfizer.

While Gavi is close to an agreement with some manufacturers, contract negotiations with other companies are not as advanced, according to sources close to the talks. No deals have yet been agreed.

The biggest orders are with Moderna and Pfizer, alongside the Serum Institute of India, Novavax NVAX.O, Johnson & Johnson JNJ.N and Clover Biopharmaceuticals 2197.HK.

“Being cognisant of local needs, we are seeking to provide pragmatic solutions to requests whenever possible,” Pfizer said in an emailed statement, while Novavax said the status of its COVAX deliveries was currently “unclear”. Moderna said it had nothing to add at this time.

COVAX follows in the steps of other vaccine buyers in trying to cut deliveries agreed at the height of the pandemic, including European Union governments. Pfizer and Moderna have agreed to delay some shipments. Read full story

In total, COVAX has delivered more than 1.5 billion doses in the last 18 months.

However, its initial aims of contributing towards the goal of vaccinating 70% of the population of every country in the world by this month have now effectively taken a back seat to protecting 100% of the most vulnerable – namely, health workers and the elderly.

While 66.3% of the world’s population has now had at least one COVID-19 vaccine dose, the proportion falls to 17.8% in low-income countries, according to Our World In Data.

“What is critical for the global pandemic response now is not a high volume of doses, but tailored supply and support to lower-income countries,” said Gavi.

Documents ahead of the organization’s board meeting this week, reviewed by Reuters, also show COVAX is considering extending its work to “leverage dose donations” from high-income countries to provide COVID-19 vaccines for children, as well as adults, in some of the countries the scheme supports.

By Jennifer Rigby and Francesco Guarascio

(Reporting by Jennifer Rigby in London and Francesco Guarascio in Brussels, with additional reporting by Edward McAllister, Natalie Grover, editing by Mark Heinrich)