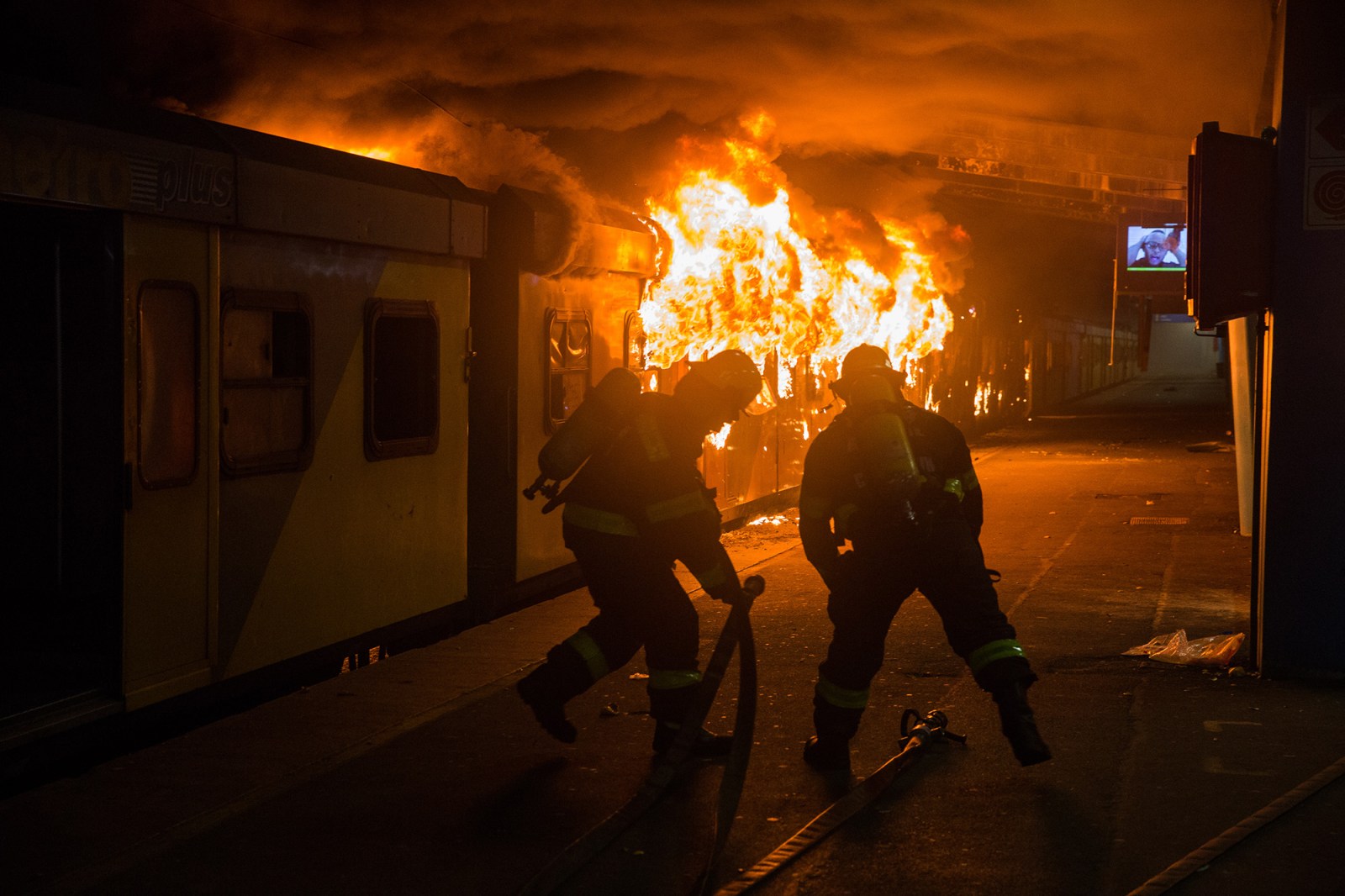 Fire fighters arrive to extinguish a train that has been set alight during a protest over delays at Cape Town train station, 12 June 2017. (Photo: GroudUp/Ashraf Hendricks)

The rail agency — which is supposed to provide an efficient, safe and cheap form of public transport to millions of commuters — has been crippled by mismanagement, corruption and sustained theft and vandalism of its infrastructure.

A new special commission dedicated to the Passenger Rail Agency of South Africa (Prasa) must be established to examine how the agency was left to slide into “almost total ruin”, said Chief Justice Raymond Zondo in the final report of the State Capture Commission.

On Wednesday, Zondo (who led the inquiry) formally handed over the final volumes of the report to President Cyril Ramaphosa at the Union Buildings in Pretoria.

The rail agency — which is supposed to provide an efficient, safe and cheap form of public transport to millions of commuters — has been crippled by mismanagement, corruption and sustained theft and vandalism of its infrastructure.

During testimony in 2020 and 2021, evidence was heard from various people, including former board chair Popo Molefe, former group CEO Lucky Montana and Prasa’s head of Legal, Risk and Compliance, Martha Ngoye, about goings-on at the agency. The commission heard of infighting between Montana and Molefe, and how the Prasa legal team had no control over certain contracts including the ill-fated Swifambo locomotive contract.

At one point, reports of infighting between Molefe and Montana landed before then president Jacob Zuma, the ANC Top Six and Parliament — which led Zondo to ask where Parliament was in assisting Molefe and his board.

The commission’s final report covered issues of governance at the rail agency, the breakdown of the relationship between Montana and Molefe and what steps should be taken to correct the legacy of poor governance at the agency.

Zondo said this new special commission must look into why Prasa was allowed to fail, who should be held responsible and who could have benefitted from what he called an “unacceptable state of affairs”.

The commission also recommended that all Hawks investigations related to “possible criminal conduct”, such as the Siyangena and Swifambo deals, be finalised as soon as possible. Other recommendations include that Shamila Batohi, the National Director of Public Prosecutions (NDDP), should immediately appoint a team to oversee investigations at Prasa, and for prosecutions of those suspected of committing criminal offences at Prasa.

The report recommended “serious consideration” of the prosecution of senior Prasa employees, including Montana, over the handling of the Swifambo contract. The report further recommended the speeding up of prosecutions against Swifambo director Auswell Mashaba, and Makhensa Mabunda, the director of the S Group of companies, who gained contracts from Prasa. The report said the NDPP must consider instituting charges against board members such as Sfiso Buthelezi and Montana for approving the recommendation of the locomotive contract to Swifambo.

Montana has appeared before the commission and is recorded in the report as denying any allegations of wrongdoing during his nine years as CEO of Prasa.

In the report, Zondo said he was left with the “uneasy perception” that many of the ills at Prasa had “not yet been uncovered”. He pointed out the instability at Prasa — caused by delays in filling key roles such as a permanent board and permanent CEO, for three and five years respectively, and “also of what appears of late to be a harking back to the Montana-style of leadership”.

Zondo said if he did not make a general recommendation about the matters of Prasa, “it is unlikely that Prasa will recover”. DM

This story forms part of a series of articles unpacking the findings and recommendations of the State Capture Inquiry, with a specific focus on Prasa.