Come on Baby, do the Locomotion: Prasa’s too-tall tra...

Come on Baby, do the Locomotion: Prasa’s too-tall trains under the hammer 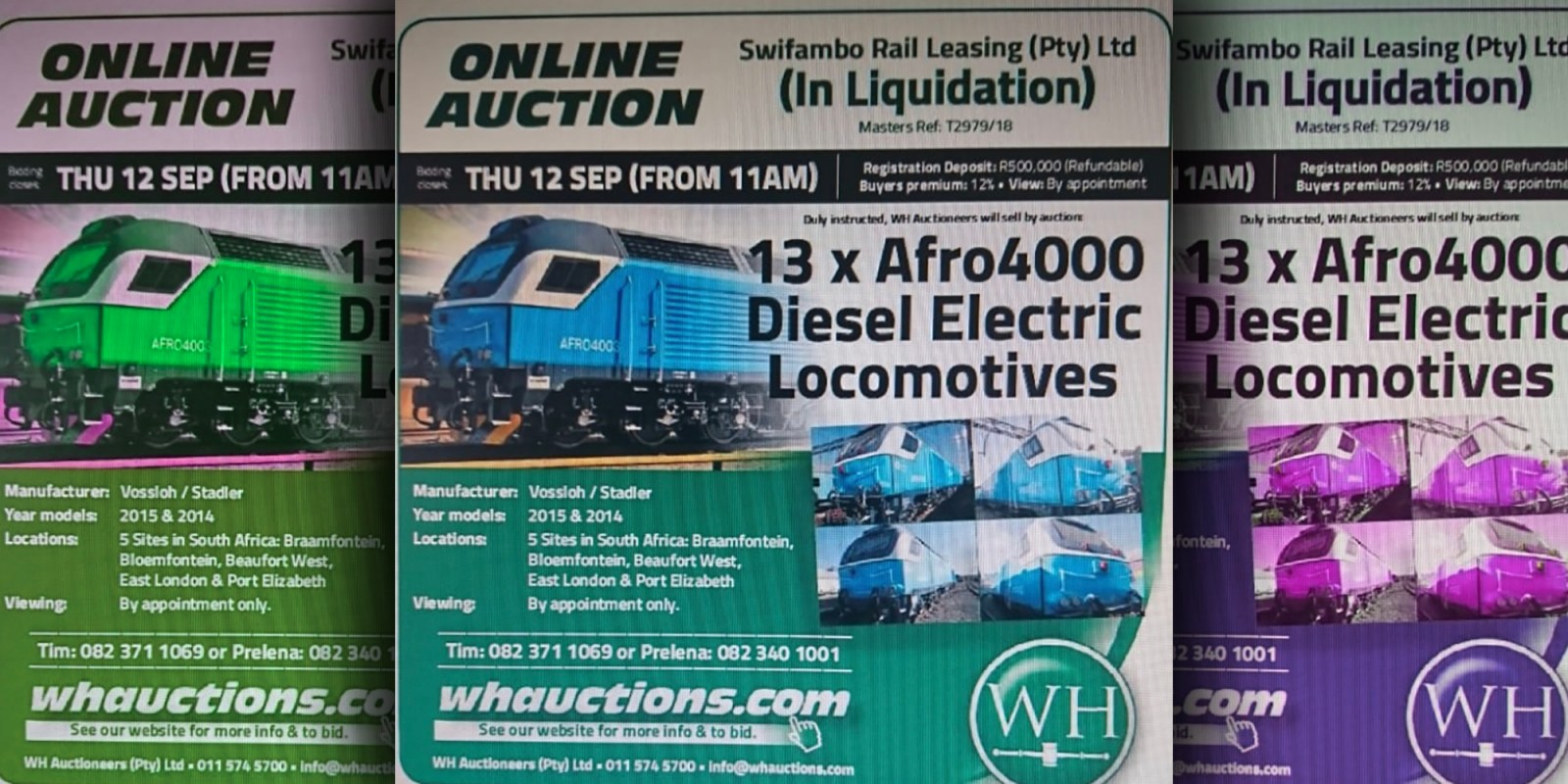 In 2012, South African rail officials embarked on a disastrous R3.5bn drive to source new locomotives through a front company set up specifically for the huge contract. Court judgments have found the deal was steeped in corruption and bid-rigging, while the machines were unfit for South African lines. Thirteen of the Afro4000 locomotives are now set to be auctioned without ever being put into use by their hapless owner, the Passenger Rail Agency of South Africa.

The website of WH Auctioneers advertises a slightly unusual set of items for one of its upcoming auctions.

Among the usual list of farms, residential properties and vehicles that are due to go under the hammer are 13 light-blue Afro4000 locomotives bearing the Passenger Rail Agency of South Africa’s (Prasa) name and logo. 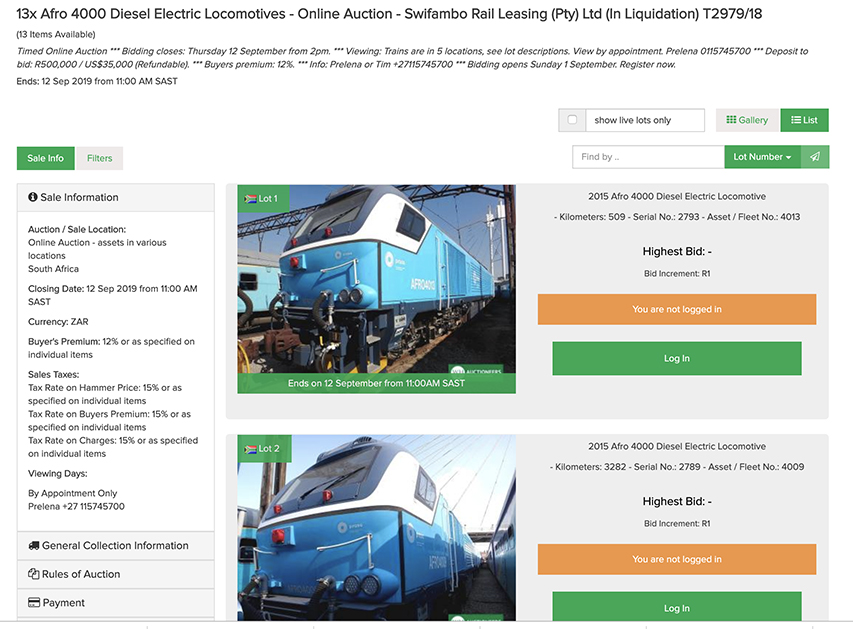 Prospective buyers have a chance to bid on the locomotives between 1 and 12 September, according to an advertisement for the auction.

According to the auction house’s website, the locomotives can be viewed at Prasa depots across the country, including the Braamfontein depot in Johannesburg, the Bloemfontein depot, and in Port Elizabeth.

The locomotives are being auctioned on instruction from the liquidators of Swifambo Rail Leasing, the front company that in 2012 clinched a R3.5-billion contract to supply 70 locomotives to Prasa. Swifambo, which merely acted as a middleman in the deal, ordered the locomotives from Spanish manufacturer Vossloh España.

Prasa ended up paying Swifambo R2.6-billion, but in turn, received only the 13 Afro4000 diesel-electric locomotives now due to go under the hammer. Prasa never received the seven remaining Afro4000 locomotives and 50 electric locomotives amid a litany of problems with the contract. In mid-2015, after some of the Afro4000s had already been shipped to South Africa, this reporter revealed in Rapport newspaper that the locomotives were too tall for South Africa’s rail specifications.

Follow-up reports detailed how Swifambo had funnelled some R80-million of its Prasa earnings to Maria Gomes, an Angolan businesswoman with ties to then president Jacob Zuma, and to George Sabelo, a lawyer with links to Zuma and his family.

Auswell Mashaba, Swifambo’s director, has stated in an affidavit that Gomes and Sabelo were introduced to him as fundraisers for the ANC. However, he has denied that the R80-million he paid them was linked to Prasa’s locomotives contract.

Despite the reports, Prasa CEO Lucky Montana, who oversaw the acquisition, insisted that the trains were perfectly suited for local use and that the deal had been concluded without any improprieties. He claimed the newspaper exposés were fuelled by racism.

However, in 2017 the Johannesburg High Court found that there had been a “criminal” fronting relationship between Swifambo and Vossloh España. The court set aside the “unlawful” contract after Prasa’s newly formed board, at the time led by Popo Molefe, sued Swifambo.

In his strong condemnation of the corrupt contract, High Court Judge EJ Francis tore into Swifambo, its European partner and Prasa’s senior leadership.

“Corruption is a cancer that is slowly eating the fabric of our society. If it is left unchecked it will devour our entire society,” reads the judgment.

Swifambo thought it might have better luck at the Supreme Court of Appeal (SCA), but the country’s second-highest court in November 2018 dismissed the company’s application to have the High Court decision overturned.

This second judgment contained the first legal pronouncement on the issue of the locomotives’ technical suitability.

The SCA confirmed that “the locomotives already delivered to Prasa… are not fit for purpose” and had been “found to be unsafe”.

The court cited various studies and reports, including one conducted by Transnet, that indicated the Afro4000s “exceeded the vehicle structure gauge height required for diesel locomotives” operating in South Africa. Put simply, the trains were too tall, the court confirmed.

Swifambo went into liquidation shortly after the SCA ruling.

In May 2019 the Constitutional Court dismissed an application by Swifambo’s liquidators for leave to take the matter to the apex court, seeing as it bore “no reasonable prospects of success”.

Swifambo’s liquidators may have to use the proceeds of the upcoming auction to settle the claims of any third-party creditors.

Prasa, which is seeking to recover its R2.6-billion from the liquidated firm, is still in the process of proving its claim.

But even if it is successful, the sale of the 13 Afro4000s will only cover a fraction of Prasa’s expenditure on the doomed contract. The 13 trains cost Prasa around R600-million, and it is unlikely that the locomotives will together fetch this price-tag.

Mashaba’s assets, if proved to be linked to the train deal, could also help to lessen the state’s losses. This reporter in 2015 detailed how Mashaba went on a R50-million property splurge shortly after Swifambo received its first payments from Prasa.

But there are huge sums of money that still need to be accounted for — as mentioned above, Prasa had paid Swifambo R2.6-billion, while Swifambo paid Vossloh España about R1.8-billion. This means Swifambo’s former director may need to explain what happened with about R800-million of the Prasa loot.

The R1.8-billion Swifambo paid Vossloh España will also be extremely tricky to retrieve.

The Spanish rolling stock manufacturer’s former holding company, German-based Vossloh AG, sold the company to Swiss firm Stadler Rail after the 2015 Prasa scandal. It is not clear which of these European entities, if any, would be targeted by South African authorities in any possible bid to recover some of the money.

Since the scandal came to light in 2015, the Hawks and the National Prosecuting Authority (NPA) have on several occasions indicated that their “investigation” into the matter was progressing well. Four years later, however, none of these probes appear to have left the station. DM