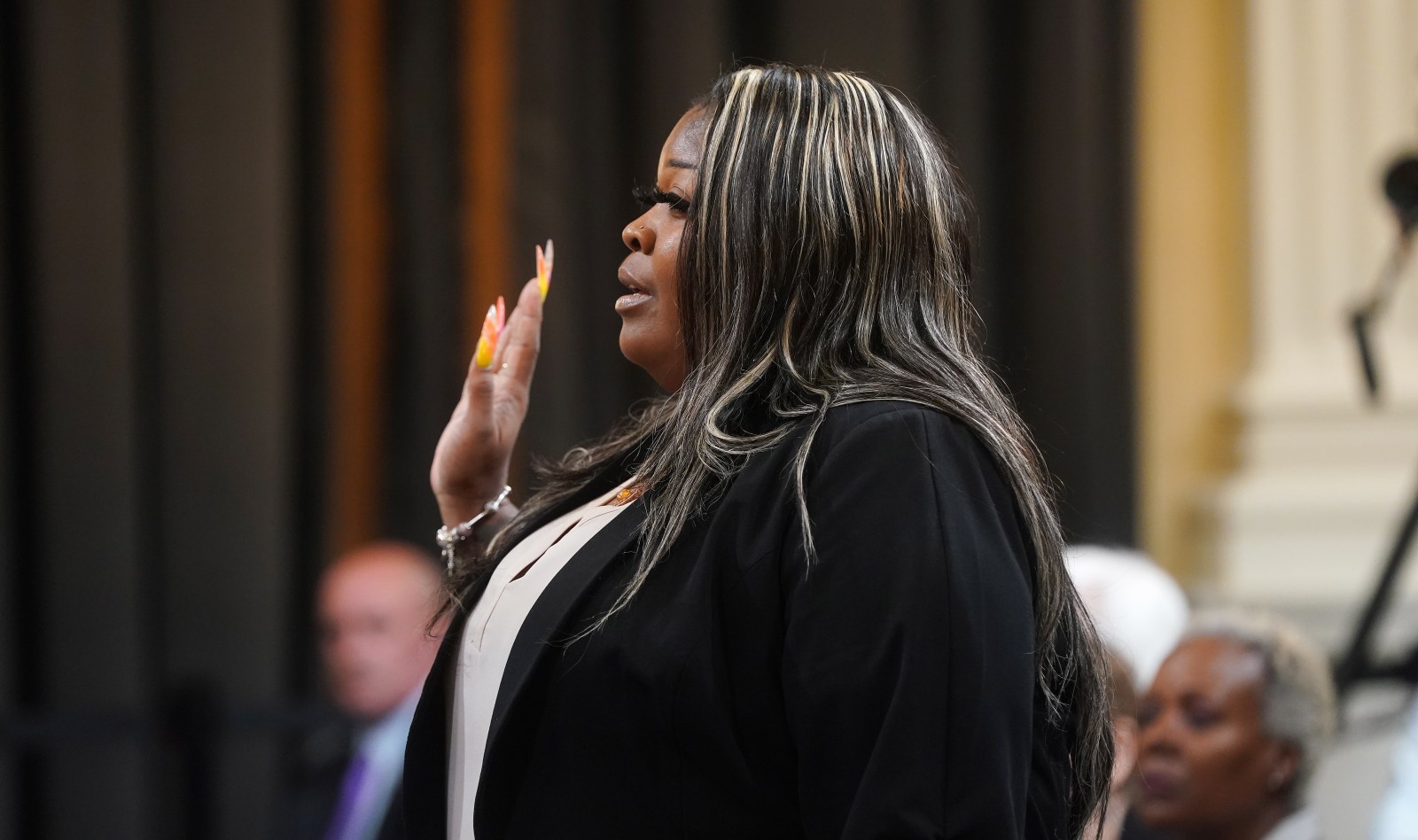 Former Georgia Election worker Wandrea ArShaye 'Shaye' Moss is sworn in to testify during a public hearing of the House Select Committee to Investigate the January 6th Attack on the US Capitol, on Capitol Hill in Washington, DC, USA, 21 June 2022. EPA-EFE/SHAWN THEW

WASHINGTON, June 21 (Reuters) - US state election officials on Tuesday recounted how supporters of Donald Trump threatened, insulted and harassed them, sometimes turning up at their homes, after they refused to help the former president overturn his 2020 election defeat.

The congressional committee investigating the deadly Jan 6, 2021, attack on the Capitol by Trump supporters heard how a flood of calls and emails paralyzed operations of the Arizona House of Representatives speaker’s office.

“We received … in excess of 20,000 emails and tens of thousands of voice mails and texts, which saturated our offices and we were unable to work, at least communicate,” Speaker Rusty Bowers told the U.S. House of Representatives Select Committee.

The committee shifted its focus on Tuesday to the Republican’s pressuring of state officials as he sought to remain in the White House despite losing the November 2020 presidential election.

It was the fourth of at least six public hearings the committee is holding this month on its nearly yearlong investigation of the attack, which took place as Vice President Mike Pence met with members of Congress to formally certify Trump’s defeat by Democrat Joe Biden.

The committee’s seven Democrats and two Republicans have used the hearings to build their case that Trump’s efforts to overturn his defeat amounted to illegal conduct, far beyond normal politics.

Much of Tuesday’s testimony tied the president directly to the pressure campaign, including an effort to replace state electors with officials expected to support Trump’s efforts to reverse the election outcome.

Bowers said the harassment had continued in the weeks before the Capitol riot, with demonstrations at his house, an armed man who confronted his neighbor and other threats and insults that continued even when his daughter was gravely ill. She died in January 2021.

At a raucous rally on Jan. 6, Trump urged supporters to march on the Capitol. He had seized on that date, when Pence was to certify the election, as a last-ditch chance to hold onto the White House despite his loss at the polls.

Bowers described conversations with Trump and his close aides including his personal lawyer Rudy Giuliani and adviser John Eastman, who urged Bowers to reject the election results.

“You’re asking me to do something against my oath and I will not break my oath,” Bowers said, recounting a conversation with Giuliani.

The committee also played audio and video recordings in which close Trump associates – and the president himself – urged state officials to reject the election results.

Georgia Secretary of State Brad Raffensperger and Gabriel Sterling, chief operating officer at the Georgia secretary of state’s office, described false allegations Trump and his supporters made about the vote in their state, including charges that thousands of dead or under-age people had voted.

Raffensperger said the state had conducted nearly 300 investigations into the allegations and found nothing wrong. “Every single allegation we checked. We ran down the rabbit trail to make sure our numbers were accurate,” he said.

The committee also heard from Wandrea ArShaye “Shaye” Moss, a former Georgia state election worker who filed suit over threats – including racist threats – to herself, her mother and her grandmother, after Trump targeted her by name following Biden’s win in her state in the presidential election.

“It has turned my life upside down,” Moss said.

The FBI told Moss’ mother, Ruby Freeman, to leave her home because of the threats.

“There is nowhere I feel safe. Nowhere. Do you know how it feels to have the president of the United States target you? The president of the United States is supposed to represent every American, not target one. But he targeted me, Lady Ruby, a small business owner, a mother, who stood up to help Fulton County run an election in the middle of the pandemic,” Freeman said in videotaped testimony.

Reuters first reported the details of the ordeal Moss and Freeman endured in December, when they described threats of lynching and racial slurs, along with alarming visits by strangers to their homes.

Trump called Raffensperger on Jan. 2, 2021, telling Georgia’s top election official in a recorded conversation to “find” enough votes for him to win Georgia. Raffensperger has remained a frequent target of Trump’s criticism.

The secretary of state nonetheless last month held off a Trump-backed challenger, Republican House member Jody Hice, to win the Republican Party’s primary as he ran for reelection.

Trump has denied wrongdoing, while repeating false accusations that he lost only because of widespread fraud that benefited Biden. Trump and his supporters – including many Republican members of Congress – dismiss the Jan. 6 panel as a political witch hunt, but the panel’s backers say it is a necessary probe into a violent threat against democracy.