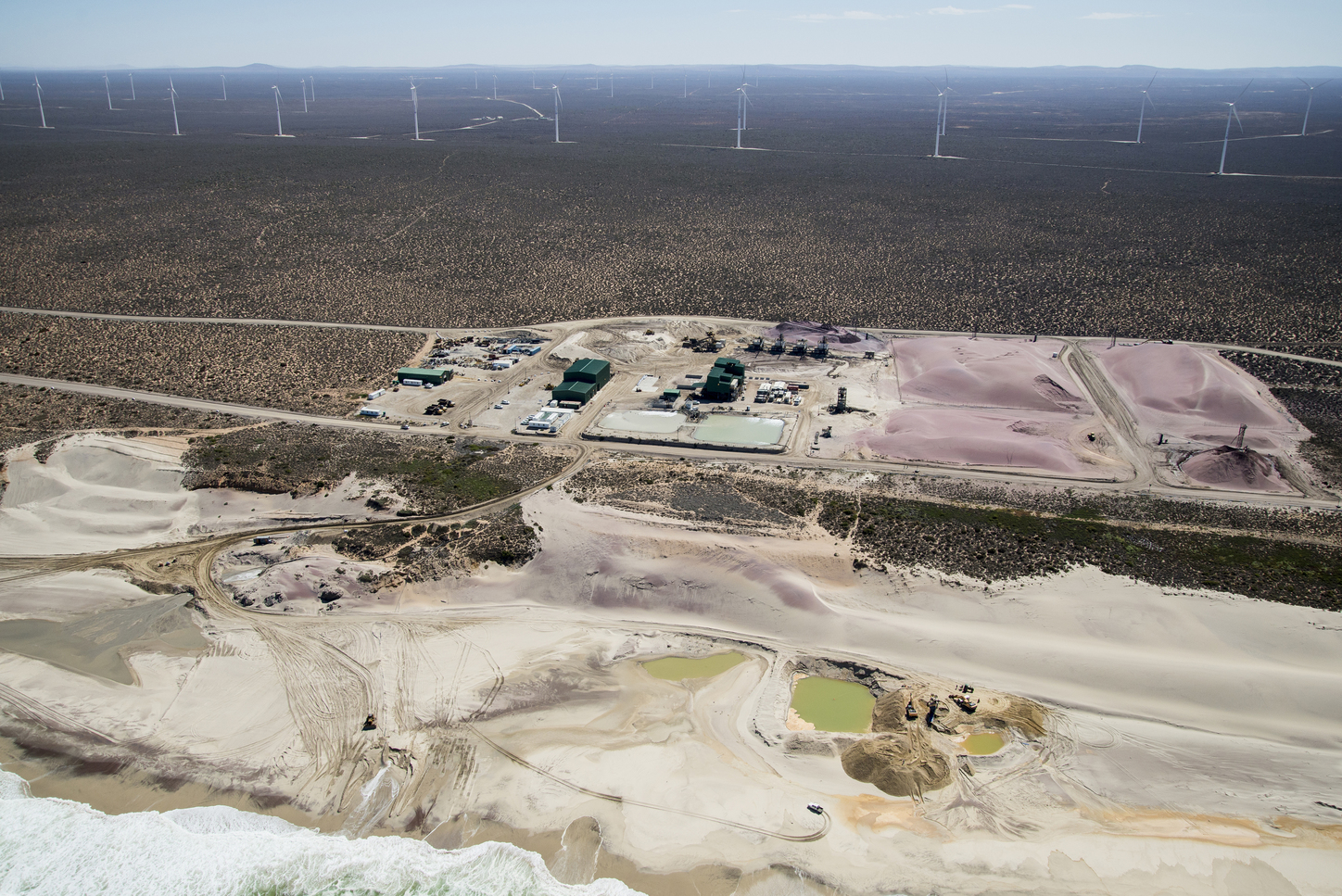 The Australian-owned Tormin mineral sands mine on the West Coast near Lutzville. In the background is Eskom’s Sere wind farm. Tormin shares the beach’s mineral resources with diamond mining company Trans Hex, which is working the excavation in the right foreground of the beach in this picture. (Photo: John Yeld)

Mineral Sands Resources has prevented legal action, at least for now, over its West Coast expansion.

For the first time, the cumulative impact of a proliferation of mining, prospecting, and oil and gas explorations, both onshore and offshore, along the West Coast may be subjected to close scrutiny by independent environmental experts.

This comes after lengthy negotiations that have staved off, at least temporarily, a potentially bruising and expensive court case. Environmental justice advocacy group the Centre for Environmental Rights (CER) was set to take on national government departments and mining company Mineral Sands Resources (MSR) over expanded operations on the West Coast.

But in terms of an agreement hammered out in talks and made an order of court, the Australian-owned MSR, which operates the Tormin mine near Lutzville, will agree to comprehensive environmental plans to manage its future mining operations, and ask environment minister Barbara Creecy to commission an independent Strategic Environmental Assessment (SEA) for the region.

A SEA is similar to an environmental impact assessment but it assesses potential cumulative impacts of development on a regional basis in order to inform planning and policies, rather than only assessing individual projects.

Environmentalists have been lobbying Creecy’s department for several years to commission a SEA for the West Coast.

In early 2019, the Department of Mineral Resources and Energy (DMR) controversially issued an integrated environmental authorisation to MSR for a huge expansion of its Tormin operations on the West Coast.

The go-ahead allowed the company to expand its existing 120-hectare mineral sands mining operation with an additional 188 hectares along 42 kilometres of coastline with ten west coast beaches.

The company was also given approval to extend mining operations inland into an ecological corridor and designated Critical Biodiversity Area.

The CER appealed against the authorisation and applied for the approval to be suspended pending the outcome of its appeal.

However, the DMR has still not ruled on either the appeal or the suspension application.

So the CER in early 2020 appealed to the environment minister, who has the legal authority to uphold the appeal and block environmental authorisation for the Tormin mine expansion. But Creecy dismissed the group’s appeal.

The CER then brought a judicial review application against both the DMR and Creecy, with MSR also cited as a respondent. The case was due to have started in March this year, but before it got underway, the parties agreed to negotiate.

After lengthy discussions, agreement was reached to suspend legal action if MSR agreed to implement various environmental protection and planning measures. This has been made an order of court.

“The primary consideration for us was that even a court victory would not have secured a cessation of mining by MSR in the immediate or near future, nor would it have secured any additional steps to be taken by MSR to prevent further harm to biodiversity as a result of its mining,” CER attorney Zahra Omar explained.

There is increasing concern about the cumulative impacts of mining on both biodiversity and livelihoods on the West Coast.

“The entire region is under immense pressure from both onshore and offshore exploration, prospecting and mining, while also bearing the impacts of historical and ongoing mining,” said Omar.

“The discussions between MSR, various state departments and CER offered an opportunity to escalate the issue and accelerate action to mitigate these regional impacts.”

The agreement does not prevent MSR from mining in its expanded area. However, the mining company must follow the environmental authorisation process in terms of Nema (National Environmental Management Act) and conduct a meaningful public participation process for any future applications to expand its operations under section 102 of the Mineral and Petroleum Resources Development Act (MPRDA).

MSR must also conduct a meaningful public participation process on the contents of its Social and Labour Plan, a statutory requirement of mining companies.

MSR has until 13 July to submit a motivation to Creecy’s department for a full SEA to be conducted for the West Coast. The SEA would be commissioned and paid for by the department.

MSR must also prepare and submit a biodiversity management plan for its expanded mining operations. The plan must provide for “no-go areas” and “set-aside” areas for conservation.

“These areas will be identified and prioritised according to actual, on-the-ground sensitivity, with the support of specialist ecologists/botanists, taking account of the Western Cape Biodiversity Spatial Plan 2017, and the areas should contribute meaningfully to the overall network of ecological corridors,” the court order states.

MSR will be responsible for the cost of developing, securing, maintaining and extending the ecosystem on land under its ownership or control, subject to the approved biodiversity management plan.

Omar said the CER was “cautiously optimistic” but the success of the order would “obviously” depend on MSR compliance “which will be closely monitored by CER”.

“It’s important to note that CER has not withdrawn its judicial review application. The application is merely stayed in terms of the order. We are entitled to set the matter down should MSR not comply with the provisions of the order,” said Omar.

She said the response of the national environment minister and the DMR had been “disappointing”. The DMR had not participated in the discussions, and while Creecy’s legal representatives had taken part, the minister had stated that she would only be bound by the court order to the extent that she was legislatively required to respond to MSR’s submission of a biodiversity management plan or motivation for a strategic environmental assessment.

MSR did not respond to our invitation to comment. DM