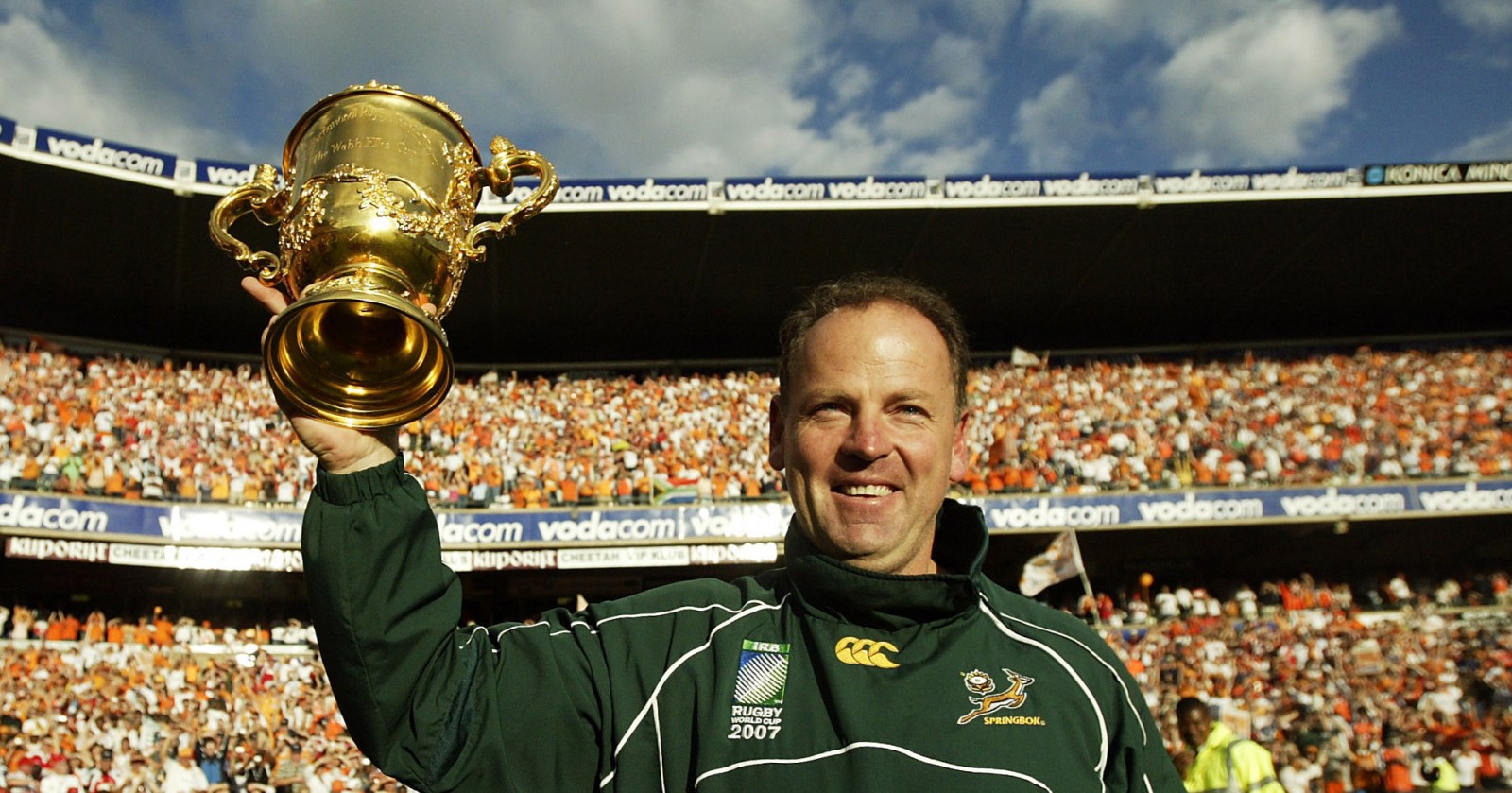 The Bulls travel to Cape Town as underdogs to face the Stormers in the United Rugby Championship final on Saturday. Bulls coach Jake White has already written another impressive chapter in his story.

When he became first XV rugby coach at Jeppe Boys High in 1989, Jake White met with the school’s headmaster and governing body.

“Do we want Jeppe to be known as a top rugby school, or just continue as we are? If we want the school to be recognised as a rugby breeding ground then we have to ensure every team, from the under-13Es to the first team, is properly coached.”

In the next six years Jeppe produced 26 Craven Week players, and two Springboks – James Dalton and Brent Moyle – emerged from Jeppe sides under White. In the decade before his appointment, Jeppe only produced seven Craven Week players and its last new Springbok was Wilf Rosenberg, who made his debut in the second Test against the 1955 British & Irish Lions.

Subsequently, the school continues to be a production line of rugby talent, with 2019 World Cup winner Sbu Nkosi the most recognised among them.

Others such as Wandisile Simelane, Tyrone Green and Hacjivah Dayimani are a few of the Jeppe alumni making their way in pro rugby today. And although they attended the school long after White left, their road to pro rugby, not obvious to them, started because of a legacy White built at the school.

It’s that attention to detail and that unflinching belief in building a foundation that has made White such a successful coach across the world. He has gone from South Africa to France, Japan and back via many places, picking up skills and honing his craft.

At his latest stop in Pretoria, White could add another gong to his list of accolades if his Bulls win the inaugural United Rugby Championship (URC) final against the Stormers in Cape Town this weekend. Few would bet against it because White has made a habit of upsetting the odds.

After his time at Jeppe, which included a couple of years as the Lions’ Craven Week coach in the early 1990s, White left the relative comfort of school coaching to pursue his passion.

White’s rise as a coach coincided with the game’s evolution (revolution?) to professionalism. At first he earned his keep as a technical analyst and assistant coach, learning and occasionally bumping heads with older, more established coaches such as Alan Solomons.

That hard-headedness, which has made White a successful coach, has also led to clashes with people. It’s part of the business where the only currency is winning. But it’s the only way he knows how. It’s his way or the highway. And almost always, his way is the right way.

His first big assignment as a head coach in the professional era was as Junior Springbok mentor in 2002. The South Africa under-21s were full of potential, but following two years of failure after winning the 1999 tournament (which wasn’t a World Championship yet), White urged then SA Rugby Union (Saru) chief executive Rian Oberholzer to give him a shot at turning them around.

Oberholzer backed the young coach but also warned him that failure at the home tournament in 2002 could spell the end of his coaching career.

Not for the last time, White coached with a threat over his head. The under-21s won that tournament, beating a star-studded New Zealand (including Dan Carter, Joe Rokocoko, Tony Woodcock and Luke McAlister) in the semis.

Many of the Junior Boks that day would go on to have stellar careers too – Fourie du Preez, Gurthro Steenkamp, Schalk Burger, Juan Smith and Ricky Januarie best among them. White’s career lifted off.

The rest has been well documented. His surprise elevation to Bok coach delivered a Tri-Nations title in 2004 and the World Cup in 2007. He built one of the finest Bok squads yet assembled against a backdrop of constant political infighting.

It’s easy to forget what a turbulent four years it was as White fought against meddling rugby administrators without consistent backing from his bosses.

The ultimate insult was that Saru asked White to reapply for his job halfway through Rugby World Cup 2007. Even for an organisation as poorly run as it was at the time, that was a new low for Saru. The story goes that White said he would plonk the Webb Ellis Cup on president Regan Hoskins’s desk as his application.

Despite that success, White’s relationship with Saru broke down and he spent the next four years in a kind of rugby purgatory. He consulted, helped out struggling teams here and there, but couldn’t find the right project.

It was a difficult time after the massive success of 2007, which wasn’t helped by watching “his” team continue to evolve under Peter de Villiers to the point where they dominated the world in 2009.

Eventually White took on a Brumbies team in crisis. They finished 11th in Super 15 in 2011 and White was tasked with rejuvenating the once great Aussie club.

In two years, they went from rabble to Super Rugby finalists, beating the Cheetahs in Bloemfontein in the quarterfinals and the Bulls at Loftus in the semifinal in 2013.

They remain the only Aussie side to win playoff matches in South Africa. Although the Brumbies lost the 2013 final 27-22 against the Chiefs after flying across the world from South Africa to Hamilton, they were the only provincial side to beat the British & Irish Lions in Australia later that year.

After leaving the Brumbies, White took the Sharks to the Super Rugby semifinals in 2014 before a move to France.

His three years at French club Montpellier yielded an EPCR Challenge Cup trophy, beating Harlequins in the 2016 final, before his globetrotting career took him to Japan for a similar-length stint in charge of Toyota Verblitz.

And then, almost unbelievably, White joined the Bulls in early 2020, just as the pandemic struck.

When White’s Brumbies scored an upset 26-23 Super Rugby semifinal win over the Bulls at Loftus Versfeld in 2013, no one knew it then, but it was the last time the Bulls were a respected force in the competition and the global game.

It was the Brumbies who delivered the death knell to a crumbling Bulls empire. Ironically, seven years on, it was White who picked up the pieces of the once great franchise.

Before White’s appointment, the Bulls finished ninth, ninth, ninth, 15th, 12th and fifth in the six completed Super Rugby seasons between 2014 and 2019. When the 2020 Super Rugby tournament was suspended due to the coronavirus outbreak, the Bulls were languishing in 11th with one win from six matches.

The union were on to their third coach in three years – Pote Human – who came after John Mitchell and Nollis Marais. All had failed to bring success.

The once-great Pretoria-based franchise, which won three Super Rugby titles between 2007 and 2010 under coaches Heyneke Meyer and Frans Ludeke, needed a boost. White provided it.

Human was let go in May 2020 in one of White’s first major acts as director of rugby. During lockdown, White decided there was no need to keep Human on with no rugby being played.

The veteran coach (Human) agreed to immediate termination of his contract. He was paid out, but White decided that he may as well start coaching the team he was planning to coach in 2021 anyway.

The Bulls won Super Rugby Unlocked, a hastily established competition during the height of the pandemic to provide players and broadcasters with a tournament.

The Bulls have also won back-t0-back Currie Cups under White and made the final of the Rainbow Cup (a watered-down pandemic version of the URC), losing to Benetton in the final. The Bulls also beat SA “A” during the 2021 British & Irish Lions series after missing a chance to play against the tourists because of a spate of positive Covid cases.

Last week’s 27-26 semifinal win over European giants Leinster in Dublin was perhaps the team’s best win and best performance in the White era.

“I’ve coached a long time now, so you learn a couple of those things,” he said when praised for his team’s ingenuity in their victory at Leinster.

“I’ve coached in Japan, coached in France and coached at the Brumbies, so I think (I’ve learnt) along the way.

“One of the things we worked hard on is that probably the Bulls were well known for certain areas of the game which we do well, but if you can tweak it and bring a couple of new things in, it obviously adds a little bit of a dimension to our game.”

The Bulls certainly have changed their style, playing with more attacking flair but never sacrificing the basics. They beat Leinster despite fielding a team without one current Springbok.

If the Bulls win the URC final against the odds, and with a squad of youngsters, journeymen and ageing stars, it might rank as White’s greatest achievement yet. DM