Brain rather than brawn will decide all-South African URC final 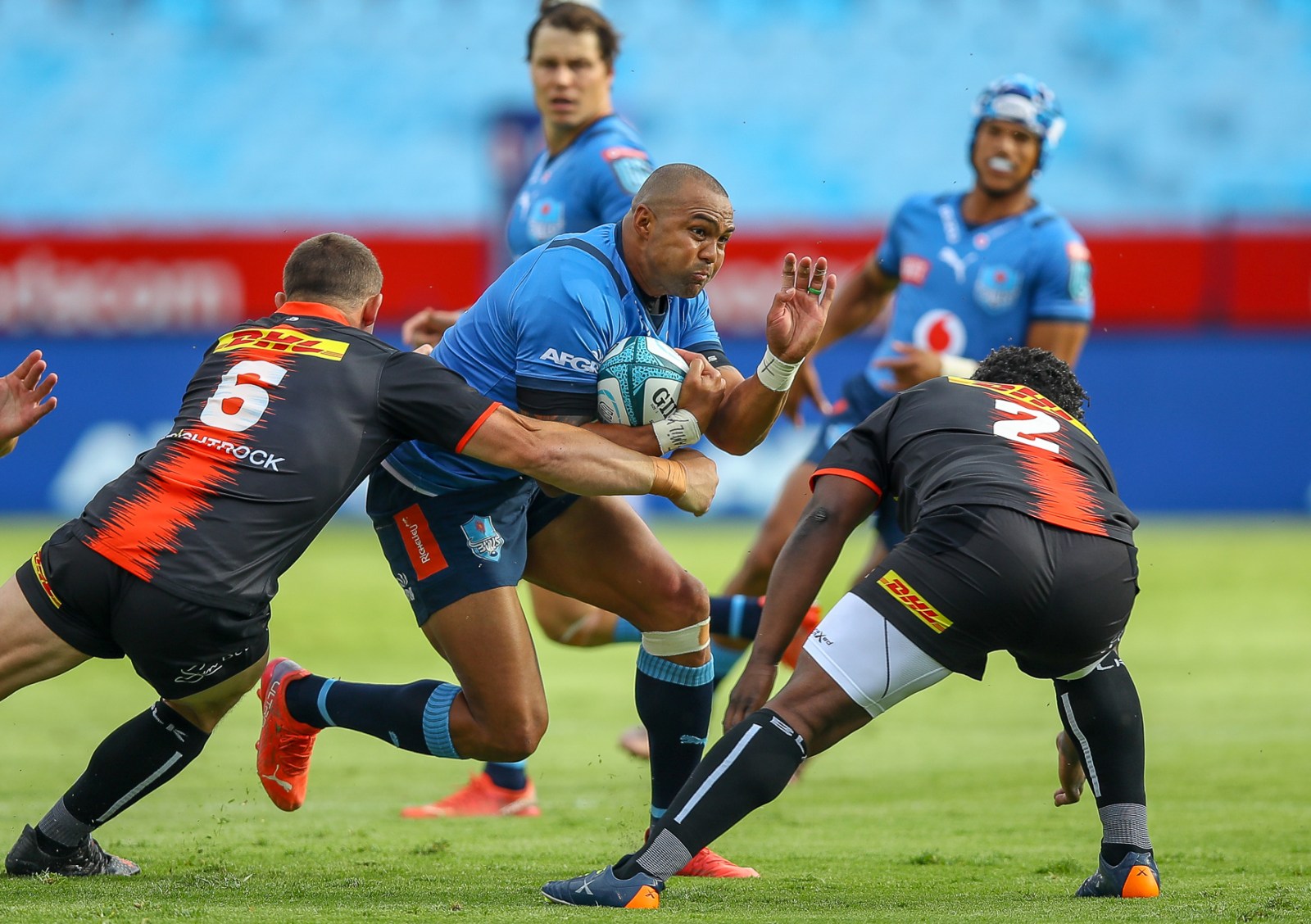 Cornal Hendricks (centre) of the Bulls trying to run through Deon Fourie of the Stormers and Scarra Ntubeni of the Stormers during the United Rugby Championship match at Loftus Versfeld Stadium on 22 January 2022 in Pretoria, South Africa. (Photo: Gordon Arons / Gallo Images)

The United Rugby Championship (URC) has showcased South African rugby at its best. While all four franchises took some time to adapt during the initial stages of the tournament — particularly away from home — the Bulls, Sharks and Stormers hit back to qualify for the playoffs and, ultimately, Europe’s elite competition, the Champions Cup.

The Bulls defied the odds to outmuscle and outwit four-time European Champions Cup winners Leinster in an epic semifinal staged in Dublin. In Cape Town, the Stormers beat Ulster via a last-gasp conversion to ensure that their fairytale season continues.

South African rugby has proved that it is ready for the next step. But for one more week, the nation will obsess over a north-south derby for the ages.

Dobson-White rivalry comes to a head

The Stormers have won five out of six games against South African opposition in the URC. That record includes two league wins against the Bulls.

Many believe that the Bulls are poised to win the decider in Cape Town on Saturday. Since Jake White joined the franchise as director of rugby in 2020, the Bulls have won three domestic titles — the Super Rugby Unlocked competition as well as two Currie Cup tournaments.

In the wake of the Bulls’ loss in Cape Town in April, White reflected on these achievements while highlighting the Stormers’ lack of silverware.

“We know what it’s like to win these things. It would be nice for you to win something,” he said to a Cape Town-based journalist at the post-match press conference. His comment, of course, was directed at the Cape rugby community as a whole.

Media mind games aside, White and Dobson have made some telling tactical statements on the field over the course of the URC.

The Bulls used a trick play from a tap penalty to breach the Leinster defence last Friday, while the Stormers opted for an innovative lineout move that bamboozled a highly vaunted Ulster pack in the other semi-final.

Both coaches will have other tactical cards to play in the final. The decision-making in the coaches’ box will be as influential as the execution on the pitch.

The Springboks’ victory over England in the 2019 World Cup final was built on their dominance at the set piece. The South African scrum fired to win a series of penalties, and from there, flyhalf Handré Pollard converted that dominance into territory and points.

Unfortunately for the Stormers, they’re unlikely to get much purchase when packing down on the notoriously fragile turf at the Cape Town Stadium. It also remains to be seen how the officials will manage the scrum.

The Bulls have one of the best-attacking lineouts in the competition and will look to control the contest from this set piece. Individually, they have some of the best lineout contesters, with Ruan Nortje and Walt Steenkamp among the top players for lineout steals.

By contrast, the Stormers have one of the least secure lineouts in the tournament — only Italian stragglers Zebre have conceded more turnovers in this area. They’ve also committed the second most lineout penalties.

While the Stormers forwards were sharper against Ulster last week, they will need to be at their best against a gun Bulls set piece unit. Salmaan Moerat and Marvin Orie — who are both set for more opportunities with the Boks this season — will be looking to make a statement. 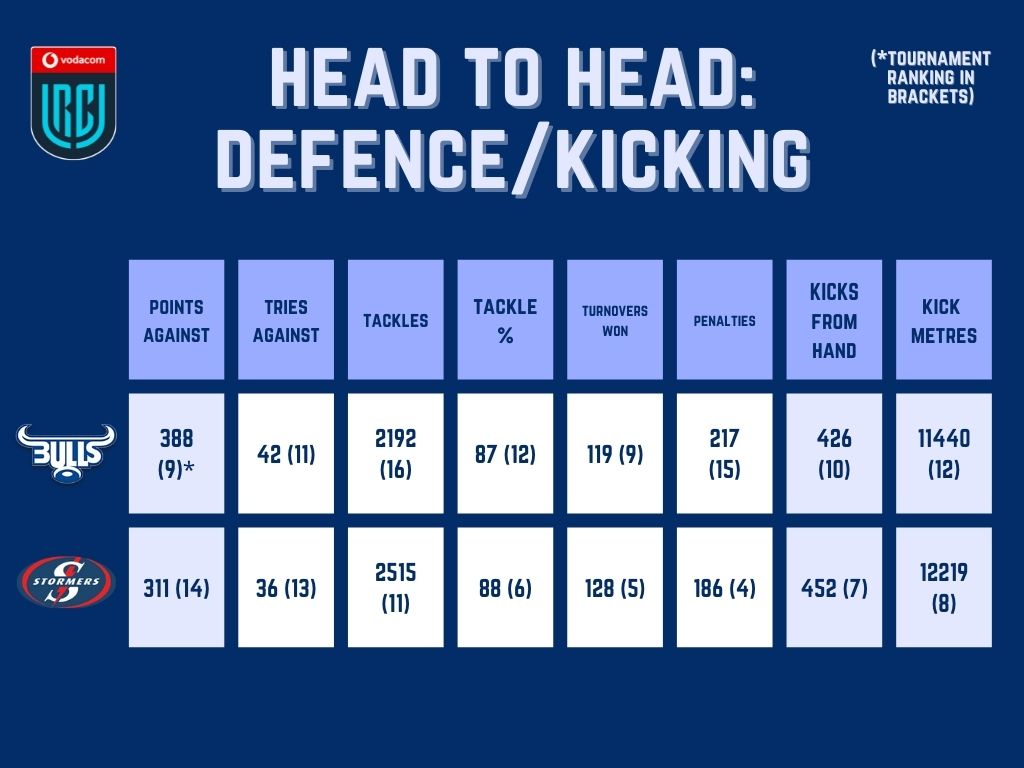 The Stormers will hope for a less structured game, where they can play to their strengths at the breakdown and on the counterattack.

The Bulls make fewer tackles and are more efficient on defence than most teams. The Stormers look to force breakdown turnovers in order to run at an opposition transitioning from attack to defence. The Cape side ranks fifth for breakdown turnovers this season.

Statistically speaking, Marcell Coetzee has been one of the best all-around players in the tournament. In terms of turnovers won, however, the Bulls captain has been overshadowed by his opposite number at the Stormers.

Deon Fourie — who was recently selected for the Springbok squad — has been the URC’s breakdown bandit in chief, with a whopping 25 turnovers. The Stormers will present a double threat in this department, as No 8 Evan Roos (15) is also among the competition’s premier fetchers. 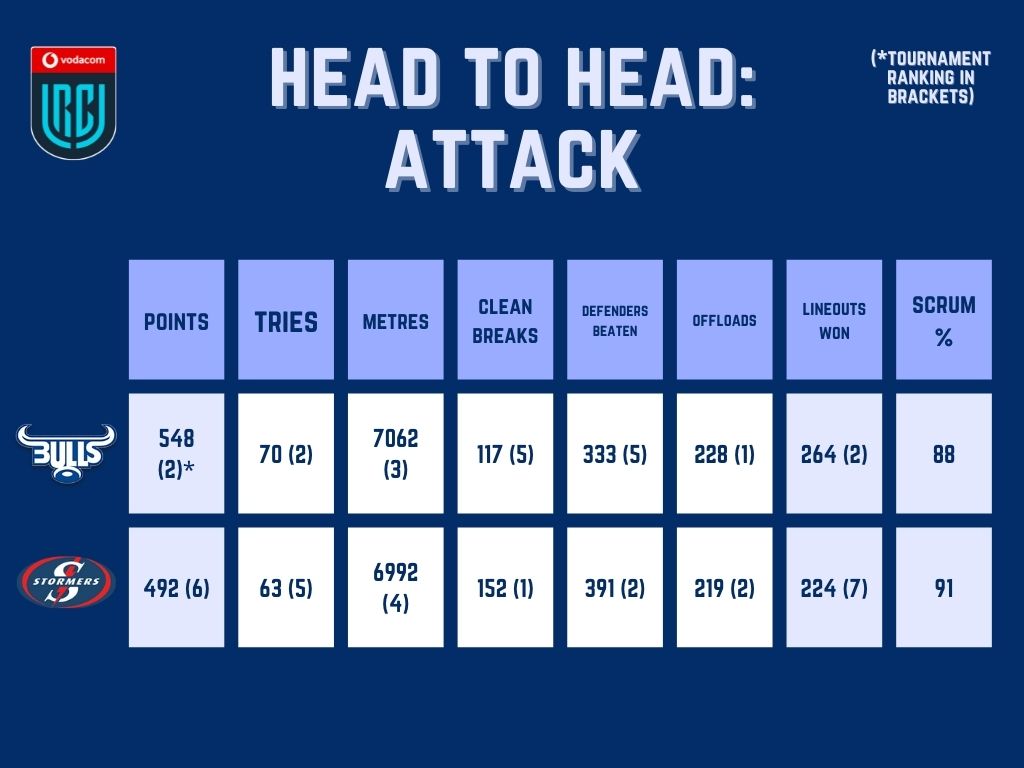 Both teams rank among the top point- and try-scorers in the tournament, and are among the top five sides for metres gained, clean breaks and defenders beaten.

The Bulls rank first and the Stormers second for offloads — with Coetzee (37) at the top of the individual list. Neither side is afraid to throw an ambitious, potentially try-creating pass.

Heavy rain is expected in the lead-up to the final, with more bad weather predicted for the game itself. This may influence the approach of both teams, and place a greater emphasis on tactical kicking.

Wet weather will suit the Bulls, who boast a stronger kicking flyhalf in Chris Smith. Stormers No 10 Manie Libbok has been devastating in general play — with 14 clean breaks to his name. Libbok is set to share the tactical kicking duties with Damian Willemse and Warrick Gelant, who both have the ability to slot in at first receiver when the situation demands it.

Neither the Bulls (ranked 10th) nor the Stormers (7th) are among the top-ranked sides for kicks from hand — or kick metres for that matter. Up until now, both teams have varied their attacking approach in their quest to win the territorial battle. But in a weather-affected final this Saturday, the Bulls and Stormers will look to their kickers and aerial specialists to advance the territorial cause.

Libbok goes into this match as the tournament’s leading point-scorer (161). Those who would question his composure and appetite for the big kick need only refer to the match-winning conversion he slotted after the hooter in the semifinal.

That said, the Stormers will need their mercurial flyhalf to contribute with a more consistent showing in the final. Last week, Libbok missed two shots on goal before sinking Ulster at the death.

Smith showed his mettle when he kicked a match-winning drop goal against the Sharks in the quarterfinal. The Bulls have another sharpshooting option in Morné Steyn — one of the game’s greatest kickers under pressure.

Steyn came off the bench to kick the series-winning penalty for the Boks against the British & Irish Lions last year. Back at the same venue nearly 12 months later, Steyn could steer the Bulls to URC glory in the final stages of the decider.

Emotional journey a blessing or a curse?

The Bulls began the year as the bottom-ranked side in the South African shield. After winning a series of games at Loftus Versfeld, they ascended the rankings and took some momentum into the playoffs.

The belief and resilience within the group was patent when they went to Dublin last week and knocked Irish giants Leinster out of the competition. The big question, of course, is whether they have enough in the tank to win a final in Cape Town.

Similarly, one could ask whether the Stormers have anything left after an emotionally and physically draining season. The semifinal itself stretched well into injury time, and the team was forced to fight tooth and nail before Gelant touched down for a try.

The influence of the Cape Town Stadium crowd should not be discounted. Ulster did well to silence the 31,000 fans that attended the semifinal, at least up until the decisive fourth quarter.

In the final moments, the crowd found its voice, and the Stormers channelled that energy to complete a dramatic win.

The ground will be near full capacity for the final this Saturday — if restrictions are lifted. If the Bulls fail to make an early statement and take that crowd out of the equation, they may struggle to stop the Stormers from claiming their first title victory in an intercontinental competition. DM