'Mike Pence deserves it': Trump's ire at VP a focus of... 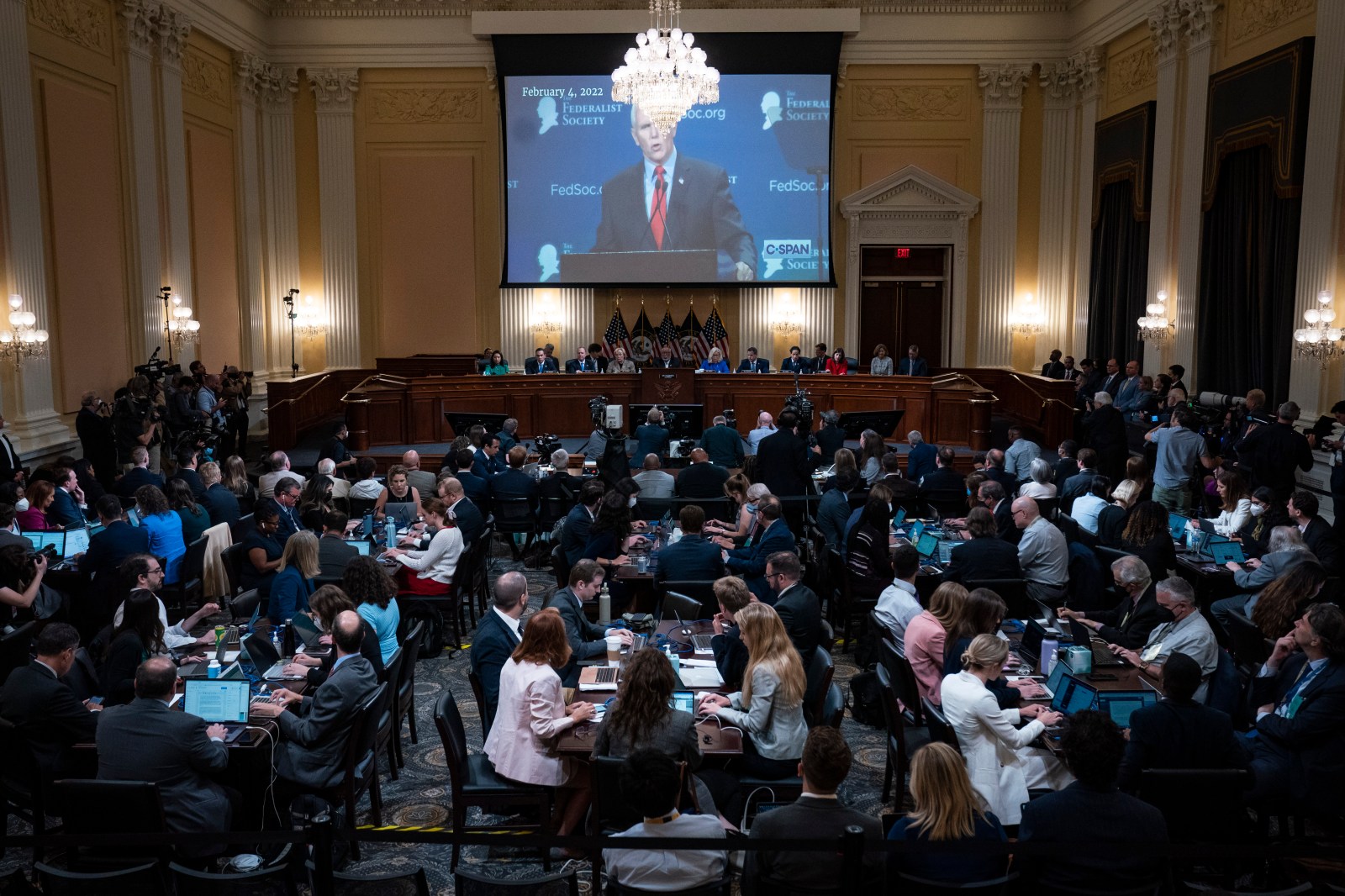 A video of former vice president Mike Pence speaking is shown on a screen as the House Select Committee investigating the January 6 attack on the US Capitol holds its first public hearing on 9 June to reveal the findings of a year-long investigation. (EPA-EFE / Jabin Botsford / Pool)

WASHINGTON, June 10 (Reuters) - A congressional panel investigating last year's assault on the U.S. Capitol by Donald Trump's supporters presented evidence at its prime-time hearing that the former president posed a danger both to American democracy and his vice president, Mike Pence.

Representative Liz Cheney, the Republican vice chair of the House of Representatives select committee probing the Jan. 6, 2021, attack, told the hearing on Thursday that Trump spoke approvingly of the mob’s chants to “hang Mike Pence.”

The Democratic-led committee is holding a series of six hearings this month to share findings of its nearly year-long investigation into the events on and before the day of the attack.

“You will hear that President Trump was yelling and, quote, ‘really angry’ at advisers who told him he needed to be doing something more” to quell the riot, Cheney told the hearing. “And, aware of the rioters’ chants to ‘hang Mike Pence,’ the president responded with this sentiment: quote, ‘Maybe our supporters have the right idea,’ Mike Pence, quote, ‘deserves it.'”

The Capitol attack was launched in a failed bid to stop members of Congress from formally certifying in a process overseen by Pence the Republican Trump’s loss to Democrat Joe Biden in the November 2020 election.

Normally a routine event, the certification became a focus for Trump, who saw it as a last-ditch chance to retain the presidency despite losing the election. His supporters flocked to Washington to rally with Trump, who had made repeated false claims that the election was stolen from him through widespread voting fraud.

When thousands of Trump’s supporters stormed the Capitol, they sent lawmakers, staff, journalists and Pence himself fleeing for their lives. The crowd did not just call for the vice president to be hanged, it erected a makeshift gallows outside the Capitol.

The committee played a video of Trump’s remarks at the rally in which he urged supporters to march on the Capitol – the seat of Congress – and “fight like hell.”

“If Mike Pence does the right thing, we win the election. All Vice President Pence has to do is send it back to the states to re-certify, and we become president – and you are the happiest people,” Trump told the raucous crowd.

“Mike Pence is going to have to come through for us – and if he doesn’t that will be a sad day for our country,” Trump added.

Cheney and Democratic Representative Bennie Thompson, the committee’s chair, outlined plans for the remaining hearings. One will focus on Trump’s efforts to pressure Pence to refuse to count electoral votes. Cheney played a video clip of Pence saying in remarks this past February: “President Trump is wrong. I had no right to overturn the election.”

“Witnesses in these hearings will explain how the former vice president, as well his staff, informed President Trump over and over again that what he was pressuring Mike Pence to do was illegal,” Cheney said.

Short said in a deposition to the committee that Pence ultimately knew that his fidelity to the Constitution was his “first and foremost oath.”

(Reporting by Patricia Zengerle and Richard Cowan, additional reporting by Doina Chiacu; Editing by Scott Malone and Will Dunham)