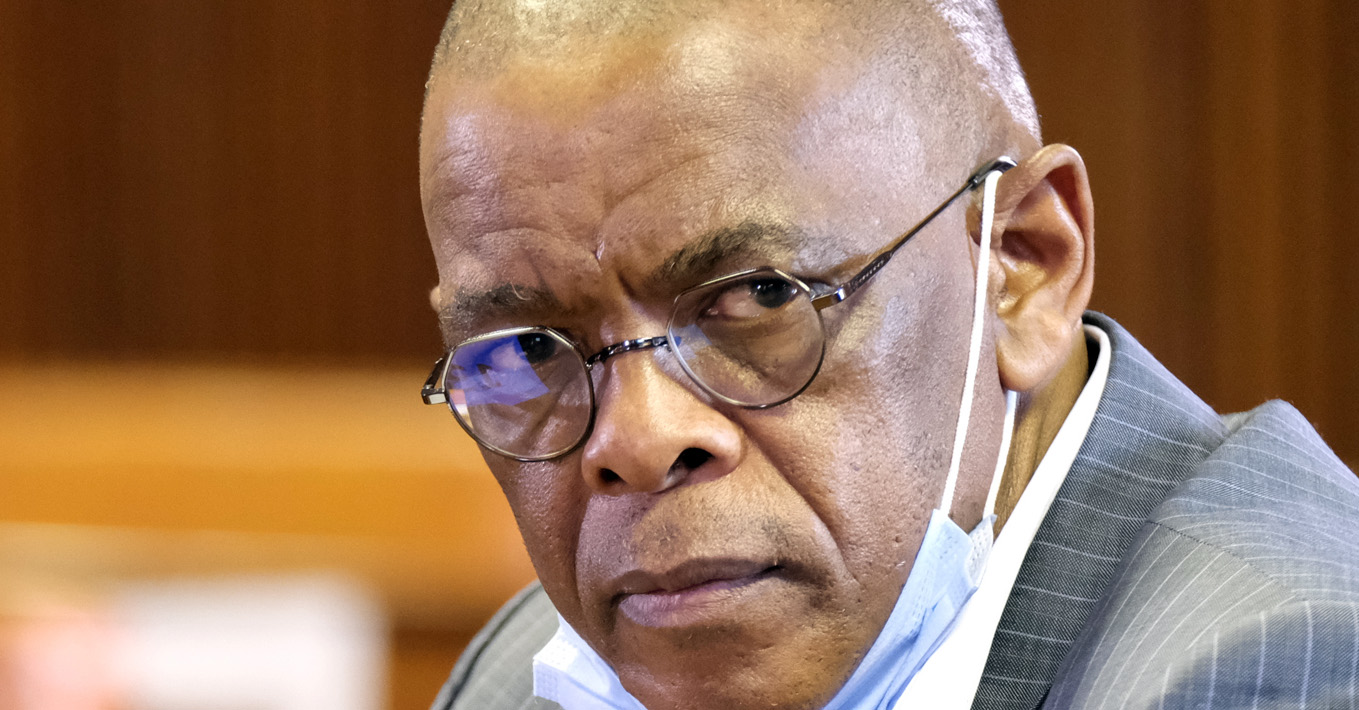 Ace Magashule inside court G for the pre-trial hearing of his corruption trial at the Bloemfontein High Court, 10 June 2022 (Photo: Lihlumelo Toyana)

Suspended ANC secretary-general Ace Magashule claimed in court on Friday that pre-trial proceedings in his R255-million Free State asbestos corruption case were being deliberately delayed to prevent him from participating in the ANC leadership race.

Pre-trial proceedings in the corruption case against Ace Magashule and his 15 co-accused have been postponed to September 23.

The suspended ANC secretary-general was frustrated after the judge in the Bloemfontein high court announced that the case would yet again be postponed pending the Supreme Court of Appeal’s (SCA) ruling on the Free State asbestos case.

Magashule decided to submit an application to the higher court in February after he failed to convince the Bloemfontein high court to dismiss the charges against him.

Magashule has been charged with fraud, corruption and money laundering regarding a contract the Free State Department of Human Settlements awarded to the Blackhead Consulting joint venture (JV) to audit and remove asbestos from homes about six years ago. He was provincial premier at the time.

During his brief appearance, Magashule addressed the court directly about how the case has affected his public image, saying that the delays were deliberately created to prevent him from participating in the ANC leadership race.

“I am a politician and we are going to a conference in December. I will argue that I am not guilty of anything. I have not stolen a cent and it is a deliberate move to prevent him from standing as a leader of the ANC. We know it has been a plan hatched but not by the courts. I also give instructions to my legal representatives and I just want South Africans to know that we are ready, it is the NPA which is denying us that space,” he said.

[WATCH] “Charge or no charge, I’m going to stand [at the ANC national elective conference], if nominated by branches,” says suspended ANC secretary-general Ace Magashule on the sidelines of his court appearance in Bloemfontein.

When proceedings were concluded, Magashule went on to address the media outside the courthouse where he used the opportunity to back ANC members who have been casualties of the controversial step-aside guidelines.

“I am saying to the ANC and I said to the lordship, Zweli Mkhize the media were on him, analysts, white monopoly — because they said ‘Mkhize wants to be president, the way he interacted with Covid-19, the man was profiling himself’. He is one good leader and until this day, Mkhize was never charged or indicted. We know they intend to charge him. We know who else they intend on charging.  They are actually making sure they charge them towards the December conference.

Magashule, who was flanked by his close allies, former uMkhonto we Sizwe Military Veterans spokesperson Carl Niehaus and former Free State chairperson Sam Mashinini warned branches in the ANC not to succumb to being manipulated and promised to continue helping the party’s structures, despite being on suspension.

“I am saying to the branches of the ANC, if you want the ANC to be finished, keep quiet.  It is time for us not to keep quiet. I am here in the province, moving town to town working for the ANC. I said to the ANC comrades in the Free State, do not allow anybody to disband you. In this province they want to disband each and every branch, why do they want to disband each and every branch when it is supposed to go to regional and provincial conferences? They know they cannot manipulate or buy people in this province. Money plays a big role here, millions of rands, I do not know if it is part of the dollars,” he said.

The case against Magashule and 15 others for fraud, corruption and money laundering had to be postponed three months ago to allow the extradition of his former personal assistant, Moroadi Cholota, from the United States.

Magasaule was suspended last year May after a number of delaying tactics and his blatant refusal to adhere to the step aside guidelines. The rule states that members who have been criminally charged should be relieved from their official party duties.

He was among officials who were granted 30 days to step aside or face suspension.

The ANC’s elective conference is due to take place in December and Magashule is the top preference for the party’s Radical Economic Transformation slate. He will not be able to contest unless charges against him are dropped. DM