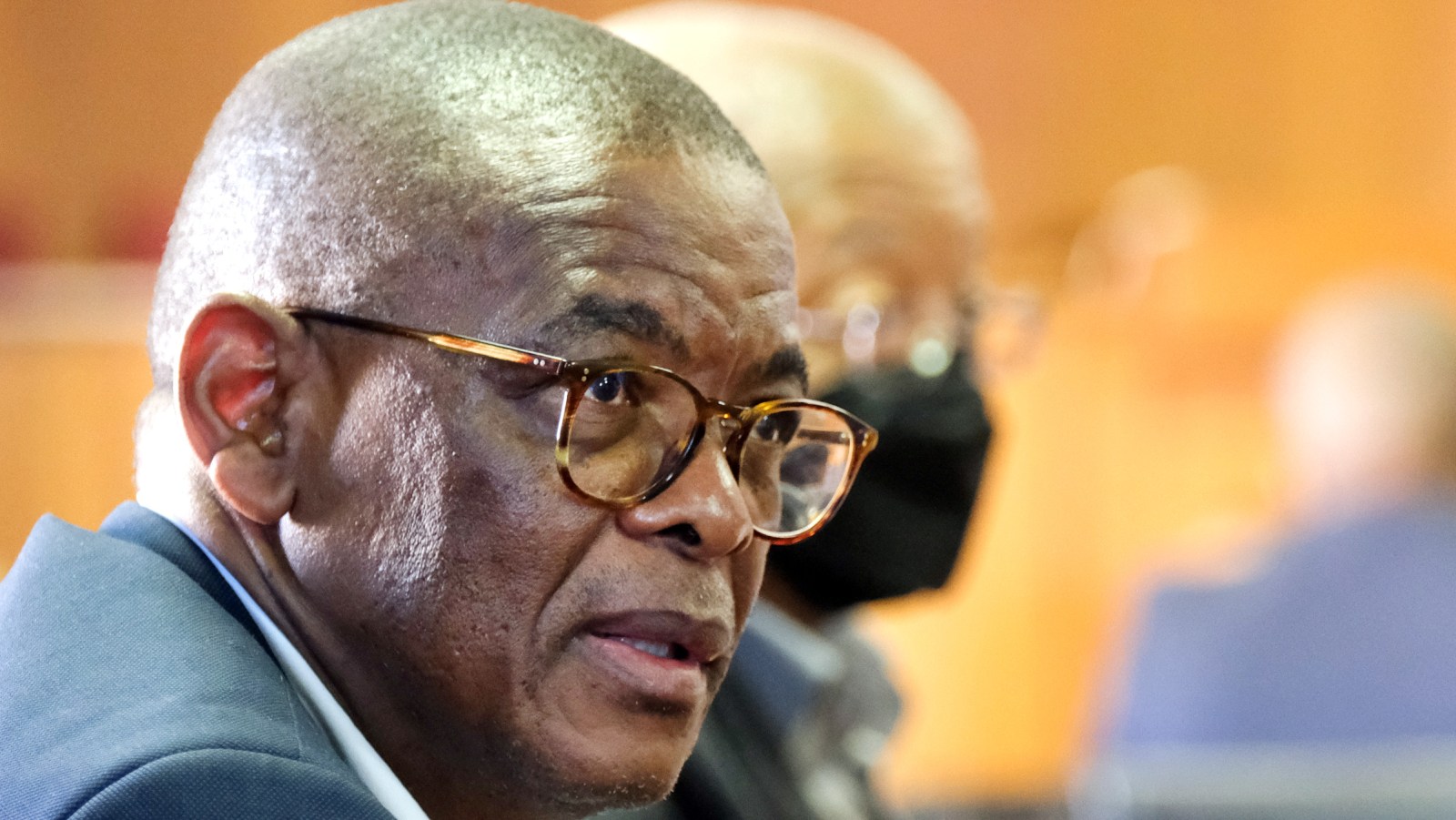 Suspended ANC Secretary-General Ace Magashule is in court this week alongside his co-accused for the continuation of pre-trial hearings related to the Free State asbestos scandal, and a separate application to have corruption charges dropped altogether. Lawyers are arguing that the State’s case is built too heavily on Zondo Commission testimony which is inadmissible in court — the first of what is likely to be many such claims.

When Judge Raymond Zondo appeared before the Judicial Service Commission earlier this month, he said he was under no illusions: legal challenges to the final State Capture report from those implicated within it were likely to come in thick and fast.

But even before the third and last instalment of the report has been released, events in court this week hint at a separate legal problem: the difficulties of converting the Zondo Commission evidence into successful State Capture prosecutions.

The Bloemfontein High Court is currently hearing applications from four of those charged with Free State fraud and corruption — including Ace Magashule — to have the cases dropped, in large part because they are argued to rely too heavily on Zondo Commission evidence.

This regulation, as State prosecutor Nazeer Cassim reminded the court on Monday, was brought in by President Cyril Ramaphosa to amend the original vision of the commission preferred by former president Jacob Zuma.

Zuma’s concept of the commission, Cassim said, was “akin to a TRC” [Truth and Reconciliation Commission], in which those cooperating would effectively be granted full amnesty from prosecution: “They will tell their story and be forgiven.”

Ramaphosa’s amendment was designed to try to ensure that those responsible for State Capture could still be held criminally responsible, while not being so draconian as to dissuade anyone from testifying before the commission.

Advocate Laurence Hodes SC, representing corruption-accused businessman Edwin Sodi, pointed out to the court that this regulation had yet to be tested by the Constitutional Court. Many will be watching the Bloemfontein High Court this week with keen interest to see how Judge Soma Naidoo deals with an issue that is likely to become key to the defence of those prosecuted for State Capture corruption.

The State has argued that the matter is one that should be addressed by the trial court during the criminal proceedings for the asbestos case, rather than through this civil litigation before the trial is even close to starting. But lawyers for the four applicants contend that a ruling on it is demanded now in the interests of justice, to avoid the prospect of a lengthy and expensive trial.

Accused number 13 in the asbestos case, Magashule, is the individual who has most to lose from a long trial, although this has not yet been aired in court: Magashule’s lawyer is only scheduled to give arguments on Tuesday.

Due to the ANC rule stipulating that those accused of corruption must step aside from leadership positions until a court formally clears them of those charges, Magashule needs either an acquittal or charges dropped ahead of the ANC’s electoral conference in December 2022, where he hopes to be re-elected back to the party’s top six as part of the Radical Economic Transformation (RET) faction.

As things stand, Magashule faces what could be exceedingly lengthy court proceedings, given that there are 16 people in the dock. A further delay to the start of the trial was announced on Monday when the National Prosecuting Authority indicated that it would seek the extradition of Magashule’s former personal assistant Moroadi Cholota from the US to testify. The pre-trial hearing — separate from the current applications — was adjourned to June.

This is not good news for Magashule’s ANC electoral prospects, although there have been reports that the suspended ANC secretary-general may still attempt to stand as a candidate in December even if the charges against him are unresolved. In recent days Magashule has been reported to be making the rounds of influential churches for prayer meetings as part of what appears to be a campaign to restore his tarnished image.

Prosecutor Cassim reminded the court of the “enormity” of what the case was about: a corruption scandal that saw R255-million in public money blown on irregular contracts to audit the use of asbestos in Free State housing projects.

“That is serious money,” Cassim said, describing it as part of the “wholesale plundering of the country”.

Advocate Christo Meiring, appearing for Mokhesi, introduced the argument which both subsequent lawyers for the applicants would further ventilate: that the State’s case relies on evidence given to the Zondo Commission by his client, and which is, in other words, self-incriminating.

If the State was not relying on Zondo Commission testimony, Meiring asked, why was Mokhesi only arrested shortly after his second appearance before the commission?

The same point was made by Sodi’s lawyer, Hodes, who said his client was arrested the very next day after Sodi’s testimony to the commission.

Meiring accused the State of being unable to prosecute Mokhesi without self-incriminating Zondo Commission evidence, while Hodes suggested that a further unjust element of Sodi’s prosecution was the fact that the State would not disclose what elements of its investigation were independent of the Zondo Commission’s hearings.

Cassim argued back on behalf of the State that Mokhesi’s case was “not difficult to prove” without self-incriminating evidence, saying one could simply consult the relevant bank records.

When it came to Sodi, Cassim’s argument was even simpler.

“On Sodi’s version [before the Zondo Commission] he did nothing wrong,” the State prosecutor said, suggesting that by definition Sodi’s testimony could therefore not be considered self-incriminating.

Maakane said that the crux of charges against Zulu revolve around the contravention of Precca, the Prevention and Combating of Corrupt Activities Act, a piece of legislation that stipulates that corruption-accused officials must be given a chance to respond to allegations against them.

The State’s failure to do so in Zulu’s case, contends Maakane, invalidates the Precca charges.

Cassim argued in response that the State was justified in not giving Zulu forewarning of the Precca charges given the possibility that Zulu might abscond or in some other way attempt to obstruct justice. He also pointed out that Zulu faces other charges of fraud and corruption beyond the Precca charges.

On Tuesday, lawyers for the final applicant — Magashule — will be heard in argument. DM