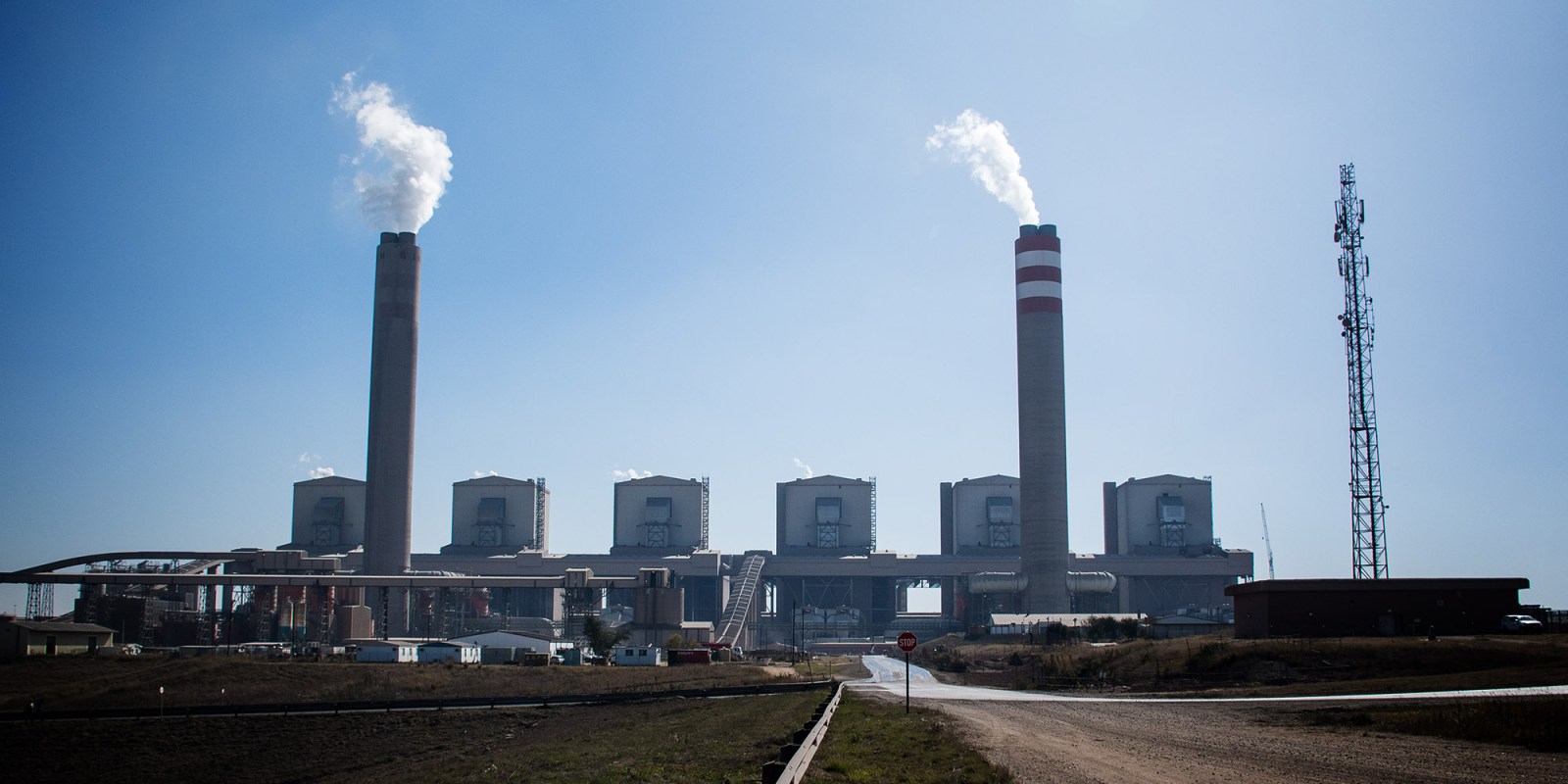 Kusile Power Station. Four of the six units pictured are contriburting to the grid. The remaining units are expected to be finished by 2024. The two towers are part of flue gas desulphurisation technology installed to reduce sulphur dioxide emissions. (Photo: Julia Evans)

The Kusile coal-fired power plant is the only facility in SA that has the technology to reduce sulphur dioxide emissions. But energy experts say this is nothing to be proud of while Eskom remains the biggest power-polluting company in the world.

Construction on Kusile Power Station, one of South Africa’s “newer” coal-fired power stations, began in 2008 alongside Medupi Power Station. It contributes 2,880MW to the grid, when everything runs smoothly.

With the FGD technology, Kusile emits 500mg/Nm3 (milligrams per cubic metre) of sulphur dioxide, which complies with the National Environmental Management: Air Quality Act of 2004.

Kusile general manager Bonga Mashazi told Our Burning Planet during a media tour of the facility on 9 June that, without the plant’s FGD, the sulphur dioxide emissions would be double that, at more than 1,000mg/Nm3.

Mashazi said what is meant by the power station being “environmentally friendly” is that its use of “novel and efficient” technologies such as FGD, a supercritical steam generator, low NOx burners and pulse jet fabric filters, to name a few, “makes [it able] to deal with issues of environmental concern”.

“So when we talk about being [environmentally] friendly, we are talking about our ability to remove more dust particles in the flue gas such that it doesn’t get into the atmosphere,” said Mashazi, explaining that the power station uses pulse jet fabric filters to reduce the amount of opacity (dust particles) released into the atmosphere.

“They proudly tell us that Kusile is being fitted with FGD, but they don’t explain satisfactorily why Eskom’s power stations emit more sulphur dioxide into the atmosphere than all generation facilities in the United States and China combined.”

Yelland was referring to data analysis by the Centre for Research on Energy and Clean Air released in October last year.

Based on the company’s own integrated report in the 2020/21 financial year, Eskom emitted 1.6 million tonnes of sulphur dioxide. India remains the largest polluter of sulphur dioxide emissions, with SA and Saudi Arabia not far behind.

But lead analyst of the report, Lauri Myllyvirta, explained to OBP that, relatively, Eskom is the world’s biggest power-polluting company because no single company in India is close to Eskom’s emissions.

Ten years ago, China and the US were the biggest polluters by a landslide, but due to massive retrofit programmes and installing cutting-edge desulphurisation equipment at their power plants, they now rank below SA.

Yelland said considering China’s population was far larger than ours and still had less SO2 emissions, it “just shows you how far behind the rest of the world we are”.

Yelland explained that a large reason that SA had such high SO2 emissions — besides only one of our plants having FGD technology — was because, unlike other countries, “we mine low-quality coal that has a high sulphur content because it’s cheaper”.

But as Lauri Myllyvirta, an air pollution and climate expert, told OBP, considering that the European Union requires new coal plants to limit their emissions to 55mg/Nm3 (when converted to the measurement standard used in South Africa), and China to 25mg/Nm3, Kusile’s 500mg/Nm3 “is an extremely lenient limit”.

“The fact that it is pointed to as an achievement gives some perspective on how dirty the rest of the fleet is — emitting around 3,500mg/Nm3,” she said.

Robyn Hugo, director of climate change engagement at shareholder activist organisation Just Share, told Our Burning Planet: “The minimum emission standards (MES), which Sasol and Eskom argue are so onerous, are in fact hopelessly weak and inadequate. The SO2 MES are some 28 times weaker than China’s, and 10 times weaker than India’s.”

Yelland explained that no other coal plant can meet minimum emission standards without FGD technology.

“So, every single coal power station in South Africa, except Kusile — if it is working properly, which is not — can never be compliant with the law, and for that Eskom should be ashamed.”

Hugo said despite compliance with air emission standards being a legal obligation, and despite uncontested evidence of the significant health impacts of sulphur dioxide, “the Department of Environment, Forestry & Fisheries (DFFE) decided, in March 2020, to double these standards for coal-fired facilities, making them half as weak as when they were published in March 2010, and laughably weak compared even to other developing countries”.

Hugo explained that MES were in a multi-year, multi-stakeholder process in which Eskom and Sasol were vocal and active participants.

Since 31 March 2010 at the latest — when the MES were promulgated — industry knew that the “new plant”, or 2020 SO2 standards for coal boilers, would be 500mg/Nm3 by April 2020, and that it would be possible to postpone compliance with these standards.

Both Eskom and Sasol sought and obtained the maximum postponement of five years, meaning they are required to comply with the 2020 MES by April 2025.

However, following significant pushback and lobbying from industry, in October 2018, the DFFE made the standard half as weak — 1,000mg/Nm3, without following the legally required public participation process.

“Despite the legislation stating that no postponements beyond April 2025 are permitted (unless facilities are being decommissioned by March 2030), and despite the damning Deadly Air judgment confirming that air pollution in the Mpumalanga Highveld violates constitutional rights, Eskom and Sasol continue to request postponements and other leniency in relation to these legislated MES,” said Hugo.

The battle for clean air

Minister of Mineral Resources and Energy Gwede Mantashe often says, “you can breathe clean air, but in darkness” – well, he fails to notice that many South Africans, especially those in Mpumalanga, do not have access to either.

There’s a reason other countries have emission standards far below our own — sulphur dioxide is the main health-harming pollutant from the burning of coal and, according to the World Health Organization, South Africa’s air quality levels exceed safe limits.

After a long legal battle, in March 2022, groundWork and the Vukani Environmental Movement succeeded in the “Deadly Air” litigation brought by the Centre for Environmental Rights, with Judge Colleen Collis of the Pretoria High Court confirming that air pollution in the Highveld Priority Area (HPA) breaches the constitutional right to an environment not harmful to health or wellbeing, and that government must hold big polluters to account.

Read more here: If Barbara Creecy appeals against the ‘Deadly Air’ judgment, it will not be a good look for government

“The landmark Deadly Air case confirmed that poor air quality in the HPA is in breach of residents’ constitutional right to an environment that is not harmful to their health and wellbeing,” said Hugo, who was head of the Pollution & Climate Change programme at the Centre for Environmental Rights at the time, where she and her team launched this case.

Hugo said that Eskom’s coal-fired power stations and Sasol’s Secunda plant are responsible for the vast majority of air pollution in the HPA, and are even responsible, by far, for the bulk of air pollution (and greenhouse gas emissions) on the entire continent.

Along with having only one power station with an FGD, Eskom has admitted that its FGD has many issues which contribute to load shedding — citing design, operation and maintenance challenges.

Eskom CEO Andre de Ruyter said “the major challenge that we have at Kusile is the novel technology of flue gas desulphurisation (FGD), which we have struggled to bed down”.

De Ruyter explained that the FGD has a “single point of failure on a unit, so if the unit doesn’t work, there is no way of bypassing it, causing us to have to shut down the entire unit”.

The Kusile power plant has faced massive cost overruns and delays — it was meant to be finished in 2014 with a budget of R81-billion, but so far only four of the six planned units have achieved commercial operation and R152-billion has already been spent.

The expanded budget is more than R161-billion after completion and the last unit is expected to be in commercial operation by the end of May 2024. DM/OBP