Accountability – yes, details – not yet, as farm fo... 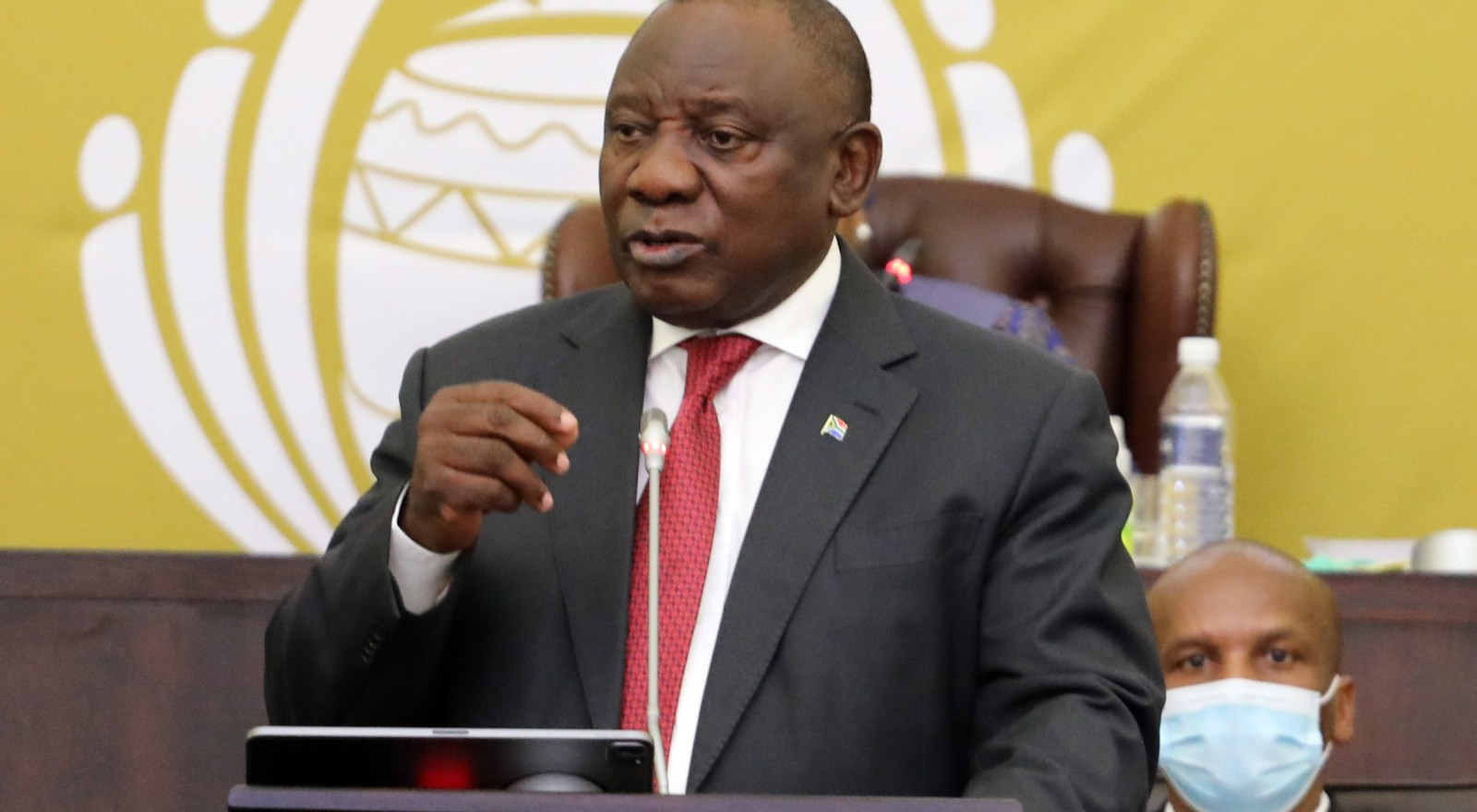 President Cyril Ramaphosa on Friday stayed on message – nothing would be said on the forex stolen from his Phala Phala farm because ‘due process’ must unfold as official investigations are under way. But that did not mean he wasn’t accounting, the president told MPs.

A giggle started the presidential reply after two days of bruising scenes reminiscent of the “Pay back the money” Nkandla saga that dogged his predecessor, former president Jacob Zuma, pretty much every time he took the podium, also to talk meandos and to giggle.

EFF MPs, for the second day in a row, were forcibly evicted from the House after delaying proceedings by barrages of points of order around the criminal charges against the president – a “money launderer and criminal”, who should not address the House.

On Friday, as EFF MPs were manhandled out of the House, women lawmakers cried “sexual harassment” and gender-based violence by parliamentary chamber protection staff, widely dubbed bouncers, who were accused of also grabbing “breasts and bums and private parts”.

Some EFF MPs had to go to hospital, and charges were laid against National Assembly Speaker Nosiviwe Mapisa-Nqakula and the “security rascals” for assault, EFF chief whip Floyd Shivambu told the House when it resumed after an hour’s suspension.

Counter charges by two protection staffers emerged in a later statement from the Speaker: “Two parliamentary chamber protection services staff were assaulted in the process of the forceful removal of rowdy MPs from the chamber, and are receiving medical attention. Criminal charges, which include assault and intimidation, are being opened by the staff members against the responsible EFF MPs.”

With investigations into the violence agreed to by all political parties’ chief whips, and Parliament looking into the MPs’ conduct “with a view to determine any further actions that may be taken”, as the Speaker’s statement said, unsettled times lie ahead for the national legislature.

But also for the president – even if he’s not in the House.

Three and a half hours after the scheduled start, Ramaphosa finally spoke about the forex farm saga after opposition parties called on him to come clean about the US dollars stolen from furniture on his Phala Phala farm in Limpopo.

“The robbery that took place on my farm Phala Phala in 2020 is the subject of a criminal complaint, and the law must take its course. In other words, due process must be followed,” said Ramaphosa.

“I will therefore not be responding to speculation, conjecture, allegations, or so-called revelations. These must be ventilated in the proper and appropriate forums. I repeat, the law must take its course.”

And that was also the line at the post-budget vote, given in every which way. But it all came down to the same: these questions – about the forex, the amounts, why it wasn’t reported, whether laws were broken – were all part of those processes he had told MPs about, and that could not be responded to while “the due process” unfolds.

Does Ramaphosa mind his legacy including that he’s the president who stuffed US dollars into sofa cushions? “It is part of what we have to deal with. It’s an issue that will be addressed…”

That presidential line must have been set in concrete legal and other advice. Or as he had put it to MPs, “The advice I have [is] this matter should be ventilated in the proper forms… The law must take its course and due process must follow”. A lot more flex existed earlier in June.

“I’m a farmer. I’m in the cattle business. I’m in the game [farming] business. And through that business has been declared in Parliament and all over I buy and sell animals… This was a clear business transaction of selling animals…” Ramaphosa told the Limpopo ANC elective conference, having again denied wrongdoing.

Since becoming president in February 2018, Ramaphosa does not declare interests in Parliament, only at the Union Buildings, because he is not an MP. As deputy president his declarations from 2014 when business interests were put into a blind trust to 2017 reflect 100 shares each in the Ntaba Nyoni Feedlot and Ntaba Nyoni Estates, described as cattle and game farms respectively.

And it’s on public record both the governing ANC and Cabinet have been briefed.

On 8 June Cabinet was briefed, according to Minister in the Presidency Mondli Gungubele in a televised media briefing on that meeting, as had been the ANC earlier in the week when Ramaphosa pledged to appear before the integrity commission. A date must still be set, it emerged on Friday.

It wasn’t a case of one or the other, Ramaphosa told journalists at the post-budget vote briefing. “The ANC is the party that deployed me to the work that I do [and] has  given me the marching orders… It’s not an either or situation.”

The saga has also been used to question Ramaphosa’s commitment to fight corruption – generally, the government’s stated commitment has been undermined by the Covid-19 personal protective equipment tender scams and his 2018 pledge to be accountable.

“I want to reassure, and indeed remind this House that accountability is a responsibility I have never shirked or shied away from. When I was elected four years ago, I promised I would come to this House regularly and answer your questions, and I have done so faithfully.”

The numbers were hauled out – 14 Q&A sessions in the House answering 84 questions, with another 159 answered in writing.

But spinning the Presidency budget vote into another platform to showcase his administration remained overshadowed by the farm forex saga.

Not that Ramaphosa didn’t try.

Talking Operation Vulindlela, the joint Presidency and National Treasury to move along economic structural reform – questions arise about some of the spin that a draft law completes with a target – alongside reducing red tape, security of energy supply and employment, particularly jobs for youth.

Talking green shoots, and social compacting, Ramaphosa urged at the end of this parliamentary debate reply on Friday, “So today we again must prove the naysayers wrong as we confront the economic and social challenges of the day.  We can only do so if we work together and not against each other.”

But that may not be the case from the president’s own political house – given the December 2022 ANC elective conference. DM