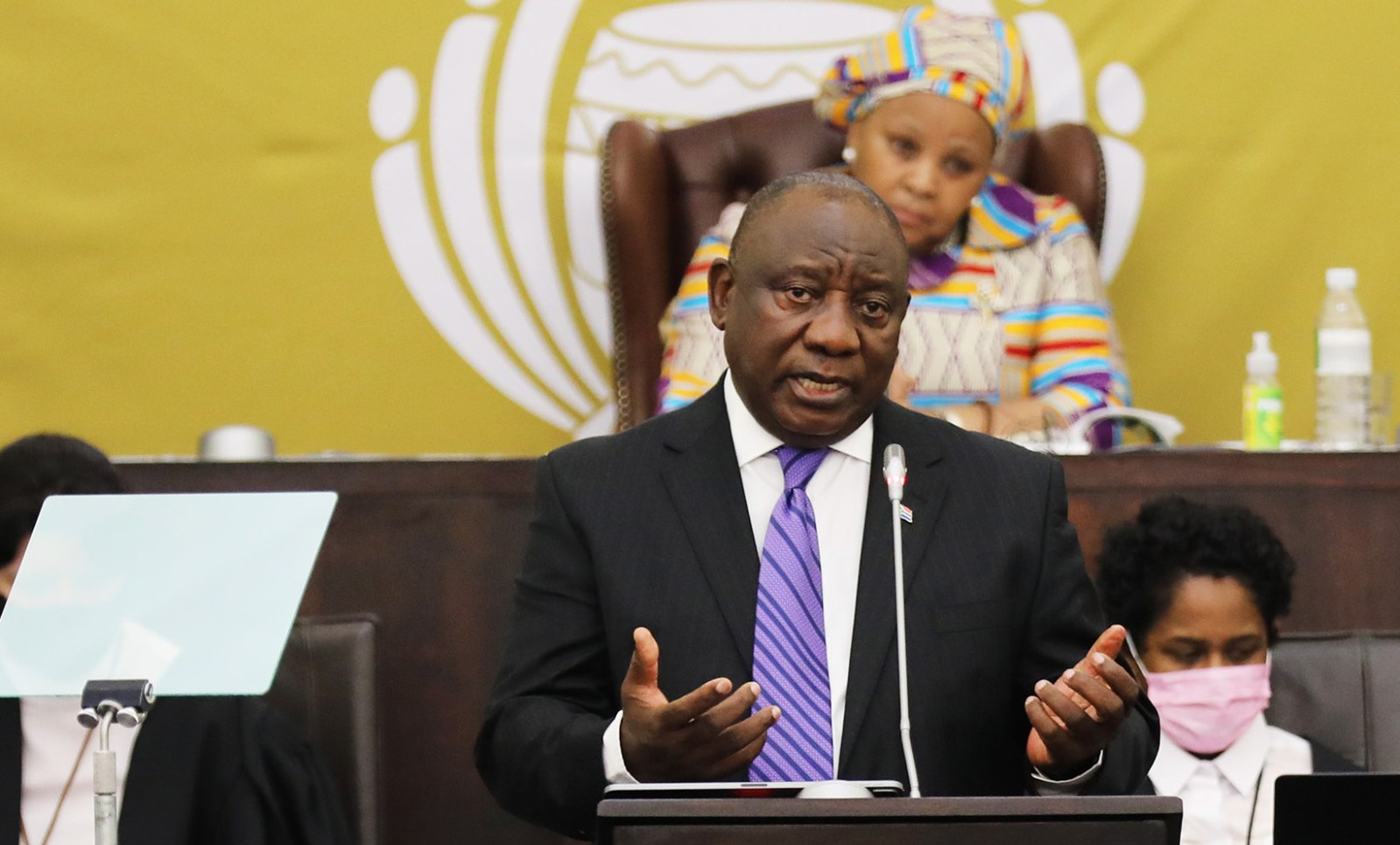 After an hour of EFF MPs’ interjections, when all were muted online or physically removed from the House, President Cyril Ramaphosa delivered what essentially was a State of the Nation 2.0.

In 2014, the call was: “Pay back the money”, for then president Jacob Zuma to do as the Public Protector said – to repay money spent on so-called security upgrades of the cattle kraal, chicken run, amphitheatre and swimming pool at his Nkandla homestead.

On Thursday it was: “We will not listen to a money launderer and a criminal”, in relation to the February 2020 theft of forex stuffed into sofa cushions on the President’s Phala Phala farm in Limpopo.

The interruptions were rowdy, raucous and persistent.

These scenes in the House could have been avoided had the President  come clean about the circumstances surrounding the forex and the theft, said DA leader John Steenhuisen.

Steenhuisen pointed out that while the police budget had been slashed, the allocation for the Presidential Protection Service had been boosted.

“We are told these precious police resources have been put to work serving the private business interests of the President – conducting secret cross-border investigations, interrogations and cover-ups.

“I’m sure you’ll agree, Mr President, South Africans have a right to know if you are using your VIP Protection Unit as a private debt collection agency.”

What the saga has shown clearly is that the Presidency, which has no parliamentary committee to account to, cannot police itself.

If, as Ramaphosa said, it was all above board, then “stuffing millions into couches, hiding the robbery from the police and paying the robbers hundreds of thousands of rand to not say a word”, were not the actions of a man with nothing on his conscience.

“These are the things we see in Mafia movies about cartels and syndicates and gangsters,” said Steenhuisen, later adding that no one in South Africa wanted “a two-bit mob boss with houses stuffed full of dirty cash for a president”, but someone who put personal ambition second to the country’s needs.

Predictably, the ANC came out in support of the President, who stayed silent on the saga, preferring to recount his administration’s track record, works in progress and social compacting.

But Ramaphosa coordinated with his deputy, David “DD” Mabuza, on the line that South Africans were not interested in political squabbles, with a ministerial chorus line of everyone joining to rebuild and renew.

“What people of South Africa want above all is to see the quality of life improving. They do not care about the political squabbles, about the competition between political parties, rivalries, plots and intrigue,” Ramaphosa said.

Mabuza echoed this: “South Africans are disinterested in our political disputes, divisions, and slogans.”

Speaking on the farm forex saga was left to Minister in the Presidency Mondli Gungubele, who reiterated that his boss was not facing any charges and had pledged to cooperate with all investigations.

The minister seemed to take umbrage that no one was concerned about Ramaphosa’s security – the President was at an African Union summit in Addis Ababa at the time of the theft at his farm – or about the President being a victim of crime.

Earlier, ANC Chief Whip Pemmy Majodina took the same line. “At the moment there are no charges and we are happy the President has committed to support the work of the law enforcement agencies.”

The broad sweep of deflection had emerged hours before Ramaphosa stepped to the podium in Parliament’s Good Hope Chamber for the Presidency Budget Vote debate.

Majodina bluntly said: “That is not within the rules anywhere… allegations on a case that is not with us. On what basis should we act?”

The Cabinet had decided to await the outcome of investigations by law enforcement and financial institutions after being briefed by Ramaphosa, according to Gungubele in a televised briefing in which he answered journalists’ questions about Wednesday’s Cabinet meeting. The official statement was silent on this.

“The approach is, let’s leave it to all those institutions until we are clarified what the outcome is going to be, then we can cross that bridge when we reach it…”

And the ANC’s Luthuli House agreed, saying Ramaphosa stepping down was not an option yet.

“When you are indicted, in other words, you are appearing in the court of law, that is the only time a member will step aside. When matters are raised in the public domain… without failure, expeditiously, you must appear before the Integrity Commission. And our President has done so,” ANC National Executive Committee member and Deputy Water and Sanitation Minister David Mahlobo told eNCA after a policy discussion document briefing.

Across party and state, ranks are being closed around Ramaphosa. This should not be a surprise. Ramaphosa is a vote-catcher – various public opinion polls put his popularity well above that of the ANC. The 2024 elections are loading.

On Thursday, Ramaphosa, in a rare moment, was blunt about centralising powers in his office since his term began in February 2018.

“What we have sought to do over the past four years is to locate the Presidency at the centre of an integrated government. From this centre, we have been leading the drive to reconstruct the nation’s economy in a manner that is inclusive and that leaves no one behind.”

But Ramaphosa also said that various reform initiatives his Presidency was pursuing, including in investment, infrastructure, employment, climate change, jobs and red tape reduction, were supportive and collaborative.

“Ultimately, it is departments and not the Presidency that implement policy,” said the President.

That’s a fudging which, like the blurring of the lines between Ramaphosa the President and Ramaphosa the farmer, as he self-describes, is set to come back to haunt him.

Perhaps to deflect the controversy, the Presidency announced that Ramaphosa had suspended with immediate effect Public Protector Busisiwe Mkhwebane amid the parliamentary impeachment inquiry.

On Friday, Ramaphosa will have the final say, in his reply to the Presidency Budget Vote. DM