Cut off by KZN floods, residents forced to use rickety...

Cut off from the world by KZN floods, these residents are forced to use rickety homemade ferries to get to work, school and hospital 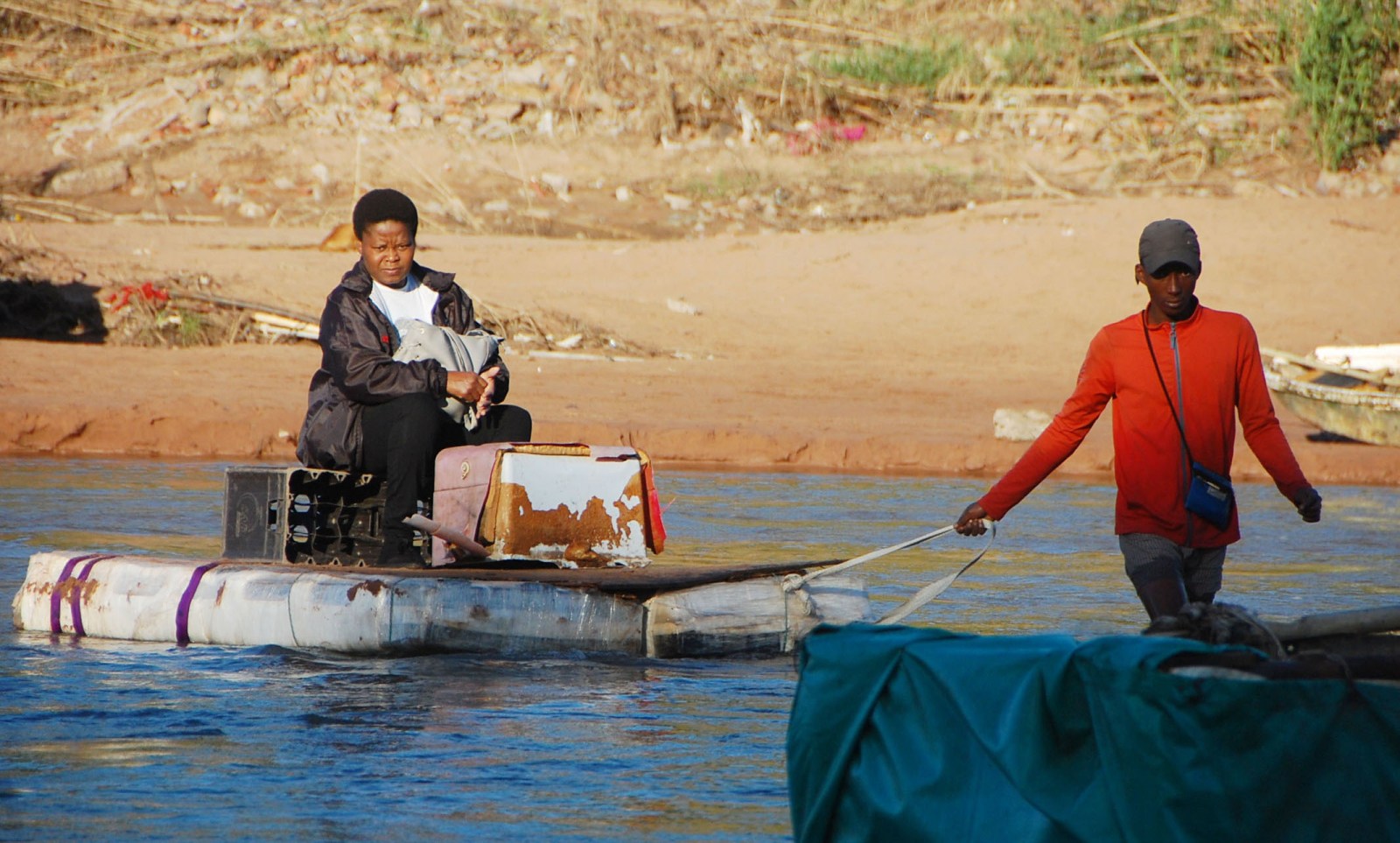 Zama Chamane is towed on a makeshift ferry by Thandokuhle Msomi across the uMlazi River near Chatsworth, Durban. (Photo: Phumlani Thabethe)

As cold weather swept through some parts of the Durban area early on Tuesday morning, a group of workers, schoolchildren and pregnant women queued on the bank of the Umlazi River.

These residents of Umlazi township and nearby informal settlements were waiting for rickety boats to take them across the river so they could get to work, schools and hospitals in Chatsworth.

The pedestrian bridge that connected Umlazi to Chatsworth was destroyed when floodwater caused electricity pylons to topple on to the bridge.

Now, the community has to rely on unsafe boats to get across the river.

One is a small, dilapidated vessel. Another four were made from pallets and other materials by youngsters who saw an opportunity to make a little cash by helping people to get across the 7m stretch of water.

Some residents chose to wade across the river.

Heavily pregnant Gugulethu Khumalo (38) was in the queue, late for her appointment at Chatsworth’s RK Khan Hospital. Once across the river, she still had to walk 15 minutes to the main road and take a taxi to the hospital.

Khumalo, who lives in Umlazi’s E Section, said she has three children who all have to get to school in Chatsworth. They have to pay boat fees to cross.

“Life is hard for us and we are at the end of our tether. We do know what to do anymore.

“I wish our government leaders, including President Ramaphosa, can see what we are going through when crossing this river. Maybe then, they will speed up the process of rebuilding this bridge,” she said.

Mahluleli Mlambo (17) was hurrying to write a half-year exam when we met him on the Chatsworth side of the Umlazi River. The only way for him to get to school is to take a rickety “boat” cobbled together with a pallet and pieces of polystyrene.

Asasihle Mtuthuma (32) runs a tuckshop where she sells fruit and vegetables. She lives in Umlazi, but her tuckshop is in Chatsworth. She said that for two weeks after the floods, she could not reach her tuckshop.

“I lost a lot of stock… my fruit and vegetables rotted because we could not get to the other side of the river.

“I went home to Harding and after two weeks I got a call that there are boats ferrying people across the river. I took the boat myself, without any stock. I saw that it is safe to cross. Now we take these makeshift boats every day.”

“I hope the government will help to build this bridge soon,” she said.

Kwanele Masondo, a 21-year-old from the informal settlement near Umlazi, is one of the youngsters running the boat business. He said they decided to help people who had been affected by the floods.

“We helped residents salvage their belongings from their shacks. But we also saw a group of people wanting to cross the river to get to schools, work, hospitals and clinics in Chatsworth.

“That is when I came up with the idea of building my own small boat,” he said.

Masondo said he used material from a tarpaulin, pieces of masonite, wood and ropes to build his boat. He charges R2 for schoolkids and R5 for adults to take the short ride across the river.

“It might not look good, but it is safe enough. I carry up to four people per ride,” he said.

“I make anything between R200 and R400 a day… there are less and less people who are using our boat because some are risking it by crossing the river on foot.”

Mhlengi Mjilo (18) also built a boat. “We wake up at four in the morning, when the water is still freezing, and we finish at 7pm when it is very cold.

“You have to know how to swim. There have been incidents where the boat capsized due to heavy passengers. I have had to rescue three pupils.”

Some of the schoolchildren said they lost their books after the boat capsized.

Although it has been almost two months since the floods, the eThekwini municipality doesn’t have any clear answers on when infrastructure such as this pedestrian bridge will be repaired or replaced.

eThekwini deputy mayor Philani Mavundla said on Tuesday that the city had limited resources and was waiting for the national government to transfer the funds to rebuild bridges, roads and houses destroyed by the floods.

Read in Daily Maverick: “KZN flood disaster: ‘Water was quickly rising and I saw that my house would fall’”

Answering questions in the National Council of Provinces in Cape Town on Thursday, Deputy President David Mabuza said progress was being made to rebuild critical infrastructure in KwaZulu-Natal.

“The (KZN) provincial government is working together with the national government to find resources to rebuild damaged infrastructure in the affected communities.

“The third phase will be a long-term one, which is reconstruction and rehabilitation, with a focus on building back better,” said Mabuza.

However, Finance Minister Enoch Godongwana told Parliament on Tuesday that the government haDn’t yet finished the first phase of immediate relief for the KwaZulu-Natal floods disaster.

He told MPs the delay was due to government departments’ failure to submit the correct documentation. DM