KZN flood disaster: ‘Water was quickly rising and I saw that my house would fall’ 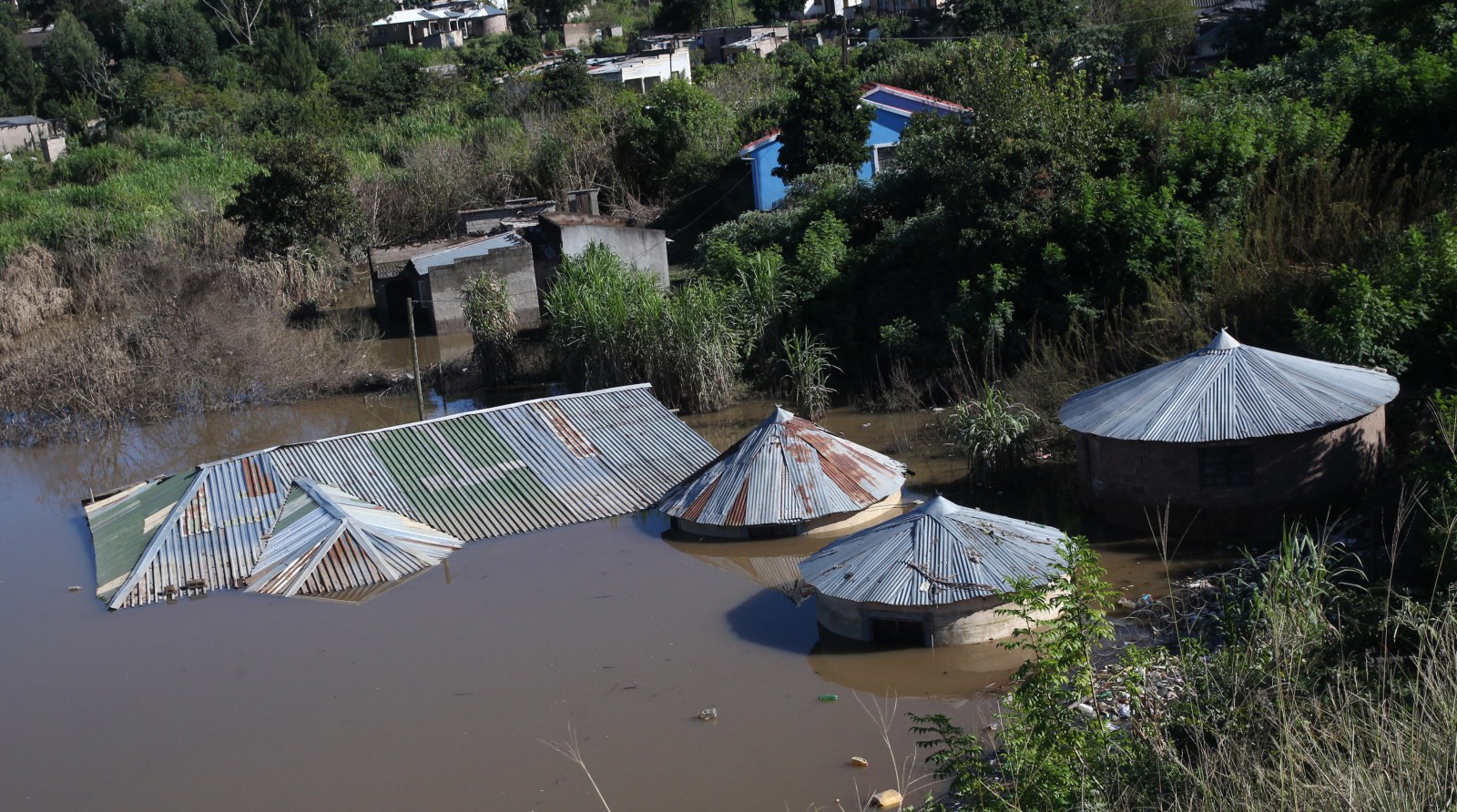 Houses were submerged in Georgdale near Hammarsdale after the heavy weekend rains. (Photo: Mandla Langa)

The latest flood disaster comes just six weeks after parts of KwaZulu-Natal were struck by devastating flooding in which more than 400 people died. At least 80 people are still missing. More than 40,000 homes were destroyed. Dozens of roads, bridges and water and electricity infrastructure were damaged and much of it has not been repaired or restored.

On Sunday morning, Thandeka Makhuphe and her two children were rescued from their flooded shack in Chatsworth’s Bottlebrush informal settlement and taken to the Shallcross Community Hall. There, they joined more than 300 people who had been displaced by floods in April.

“I’m thankful to the people who rescued us. Water was quickly rising and I saw that my house would fall. I took the children away… we lost everything that was in the house — the clothes, the food, furniture,” she said sadly.

Snethemba Mchunu, a co-ordinator at the Shallcross Community Hall in Queensburgh, said they had hoped the people displaced by floods in April would have been given temporary housing by now, but that didn’t seem to be happening.

Mchunu said they were grateful to donor organisations and local communities who had extended a helping hand to the displaced by providing food, water and clothing.

Residents of Intake, Tafelkop and surrounding areas were cut off when a bridge was washed away during the April floods. At the time, army engineers and technicians were brought in to repair the bridge. It took two weeks before traffic and pedestrians could use it again.

But after the latest rains, the road a few kilometres from the bridge was washed away, again isolating the community from clinics, schools and workplaces.

Intake resident Hlengiwe Shozi, 57, said: “We have to pay twice the price now just to get to Durban or Pinetown. The soldiers had helped to rebuild the bridge, but now the road has been damaged in another area.

“The first few weeks after the first floods, life was difficult as we couldn’t get out of the area to buy food or do anything. Now that predicament is back with us,” she said.

Residents said the soldiers had promised to repair the fresh damage so that cars could use the road again.

The latest disaster comes just six weeks after parts of KwaZulu-Natal were struck by devastating flooding in which more than 400 people died. At least 80 people are still missing. More than 40,000 homes were destroyed. Dozens of roads, bridges and water and electricity infrastructure were damaged and much of it has not been repaired or restored.

Thousands of people were still sheltering in halls and other places of safety when the latest floods struck. Some of the structures that survived the April floods were destroyed at the weekend.

On Saturday, the SA Weather Service issued a level 10 alert — the highest — for disruptive rainfall over most parts of the province. It continued to rain throughout much of Sunday.

Provincial authorities said eThekwini recorded about 266mm of rain in the weekend’s heavy storm. About 200 people had been rescued from low-lying areas by Sunday.

Search and rescue teams said they had their hands full trying to evacuate people from low-lying areas as well as old age homes and informal settlements.

Residents of Burlington informal settlement, who live near the Umhlatuzana River, were forced to evacuate their homes on Saturday when the river burst its banks.

Suburbs north of Durban, including Westbrook, Ballito, Umdloti, La Mercy and Tongaat were not spared the wrath of the storm.

On Saturday, police and members of the National Sea Rescue Institute were on the scene in the Umdloti area. They evacuated a block of flats which was starting to collapse and helped residents get to safety.

KZN premier Sihle Zikalala, whose home is in the La Mercy area which was cut off after roads on both sides were washed away, led a government delegation to assess the damage on Monday.

“We want to send our sympathy to all those who were affected. The process of rebuilding is still going to continue as we initially planned… it will cost us more money to rebuild and fix the infrastructure that was damaged.

“We already have teams that are assessing the damage in every area and (their reports) will be incorporated in the report that will be submitted to the national government,” he said.

eThekwini Mayor Mxolisi Kaunda, who was part of the government delegation, said the city was still fixing water, electricity and sanitation facilities when it was hit by the second round of floods.

He said it was too early to quantify the extent of the latest damage, but assured residents that the city “is working around the clock to fix the damages”.

Tabling her budget speech prior to the latest floods, KZN MEC for Transport Peggy Nkonyeni said her department would request R12-billion from the national government to restore roads and bridges destroyed by the April floods.

After the weekend storms, this figure could rise as more roads and bridges were damaged. These include the bridge linking Shallcross and Queensburgh, which was in the news recently when residents took it upon themselves to repair it after the April floods. All their hard work was undone in the latest flooding.

Parts of the M4 between Ballito and Umhlanga have also washed away and the road is closed.

The family of late gospel star Deborah Fraser had to postpone her funeral in Lala Kahle, near Hillcrest, on Saturday due to the heavy rain. She will now be laid to rest on Tuesday.

Many people in KZN have long regarded rain as a good omen and a blessing. Now, some fear it is becoming a curse. DM

KZN flood disaster: ‘Water was quickly rising and I saw that my house would fall’