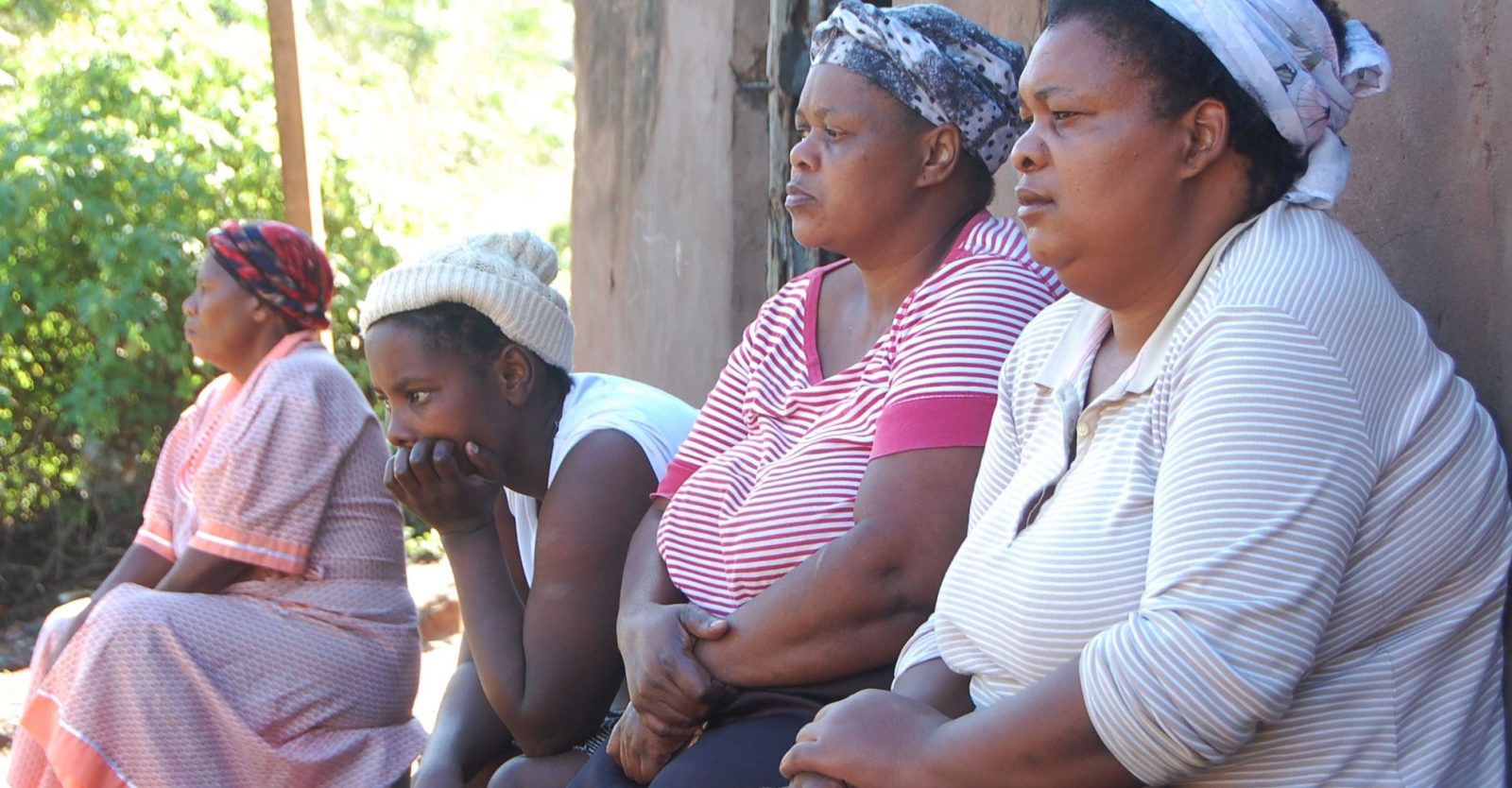 Its a grim time for the Hlophe family who are still hoping to find family members lost in the April floods at KwaCutshwayo, near Marianhill, Durban. From left are Delisile Hlophe, Ningi Zondi, Nonhlanhla Zuma and Nonhlanhla Mthembu. (Photo: Phumlani Thabethe)

Families of victims of the April floods in KwaZulu-Natal had to relive the experience last weekend when heavy downpours hit their areas again.

Last weekend’s floods in KwaZulu-Natal happened just six weeks after the floods that killed more than 400 people and caused untold havoc in the province.

On Tuesday, 24 May — just two days after the weekend floods — Daily Maverick visited families who were badly affected by the initial deluge.

Some said the latest floods came while they were still battling to come to terms with their devastating losses.

KwaCutshwayo, near Marianhill, is one of the small areas that got more than its fair share of suffering — three families here lost 17 members and only one of those bodies has since been found. Family members said they were forced to bury that body themselves, without any assistance from eThekwini Municipality or the government.

Roads and bridges in the area have not been repaired and residents struggle to cross, on foot, the rivers that swallowed their loved ones.

Some of the families complained that their situation had not been attended to because they are poor and black, and they had not received any form of assistance from the state such as counselling, food relief and vouchers.

Buyi Ntuli (29) feels suicidal, has flashbacks and has been unable to sleep since Monday, 11 April when she lost six family members, including her only child, Luyanda (11), to the raging floods.

Ntuli was in a room with her family when the flood surged through their home near the KwaCutshwayo River. She said she survived only because the flood swept her on to a nearby tree branch and she managed to hold on, but not before she broke a leg.

None of her family members has been found.

“We were eight members of the family but now there are only two of us, myself and my nephew, Zimisele (14).”

She said Zimisile was not at home when the floods struck.

“I cannot find closure. At least if my family members were found, we would have buried them and started accepting that they are gone.

“Now, I don’t know whether they died, whether they were rescued, but lost their minds. When I see boys wearing school uniforms I think it could be my son. The pain is unbearable… I cannot sleep at night… sometimes I feel like killing myself… that there is nothing to live for,” she said.

Just a stone’s throw from the Ntuli family home is the washed-away Hlope house. They lost seven family members and only one body has been found. The missing family members range from a grandfather, aged 65, to an eight-month-old child.

Nonhlanhla Mthembu (40) is a member of the Ntuli family. Her only son, eight-year-old Melokuhle, was one of the seven victims swept away by the flood.

“The most painful thing for me is that I saw it all with my very own eyes,” she said.

She was on the other side of the river at the time, sheltering in a house there because the river had burst its banks, making it impossible to cross.

A huge wave of water

“We saw a huge wave of water going down the mountain towards the house where my son and other people were sheltering. We tried to scream at them, to alert them to get out of the house. But the noise from the river water drowned our voices.

“A minute later the water just shattered the house, taking away everything on site. It was like a scene from a scary movie, like a dream. Where there was a big, four-room house stood an emptiness, as if nothing existed there before,” she said.

The home of Ntuli’s neighbour Nonhlanhla Mthembu was also washed away, with four family members, ranging in age from 52 to a one-month-old baby.

Mthembu said they spent the next few days looking for their lost family members downstream.

“The SANDF soldiers, the SAPS diving team, the dog units came and we looked and looked without any success. Only the body of Zanele Hlophe (49) was found a few kilometres downstream, on Umlazi River. She was buried a week later.

“When the bodies of [the] others were not found, we asked the authorities to come with a bulldozer to look for missing family members near the house, as we thought they could have sunk,” she said.

The bulldozer excavated the body of Ntombi Hlophe, who died in October last year at the age of 81 and had been buried in the yard.

“We could not see her grave and had thought that her grave had been washed away. We had to rebury her again near the spot where her first grave was located,” Mthembu said.

Authorities warned the families to move away from their homes as future floods would wash away the remaining rooms.

Mthembu said the authorities had taken them to the local hall, which was crowded with other flood victims, had windows missing and was unbearably cold.

“We decided to return to the house to look after our remaining belongings. We go to the hall for meals and come back home to sleep. We wish the government could help us build our homes elsewhere because we cannot live here any longer. The thought of what happened is just too ghastly.”

Sne Ntuli (27), who lost her only child, one-year-old Hlelolwenkosi, in the flood, said she decided to seek the help of the social workers to move out of the area.

“I am now staying in Clermont. After the tragedy I was not coping as the nightmares were haunting me every night and I couldn’t sleep,” she said.

The survivors from the three families said they had not received any financial or other support from the eThekwini Municipality, the KZN provincial government or the national government.

“We heard that the government is helping families to bury flood victims. We have seen none of that. Even the burials that we made, we had to do it ourselves, without any support from the authorities,” said Mthembu.

Mthokozisi Gasa, the councillor of Ward 14, which includes KwaCutshwayo, said he had done everything to extend help to the families of the victims in the area and if the families were still unhappy, they could approach his office for further assistance.

Msawakhe Mayisela, the spokesperson for the eThekwini Municipality, insisted that the municipality would assist the families of the victims if they approached it and brought relevant documents. He warned the families to move away from dangerous or low-lying areas.

On Wednesday, the Cabinet said its National Disaster Management Centre was continuing to coordinate all spheres of government in its efforts to provide humanitarian relief to affected households.

It said work on building temporary housing structures for the affected families was continuing.

“Cabinet expressed its praise and appreciation to all people and organisations involved in recovery and rebuilding efforts following the recent devastating floods in some parts of the country, especially in KwaZulu-Natal.

“Cabinet affirmed government’s commitment to managing the flood relief funds prudently and transparently. The Auditor-General of South Africa is providing an additional monitoring service and the reprioritisation of funds is in line with the government’s budgeting system,” the Cabinet said. DM