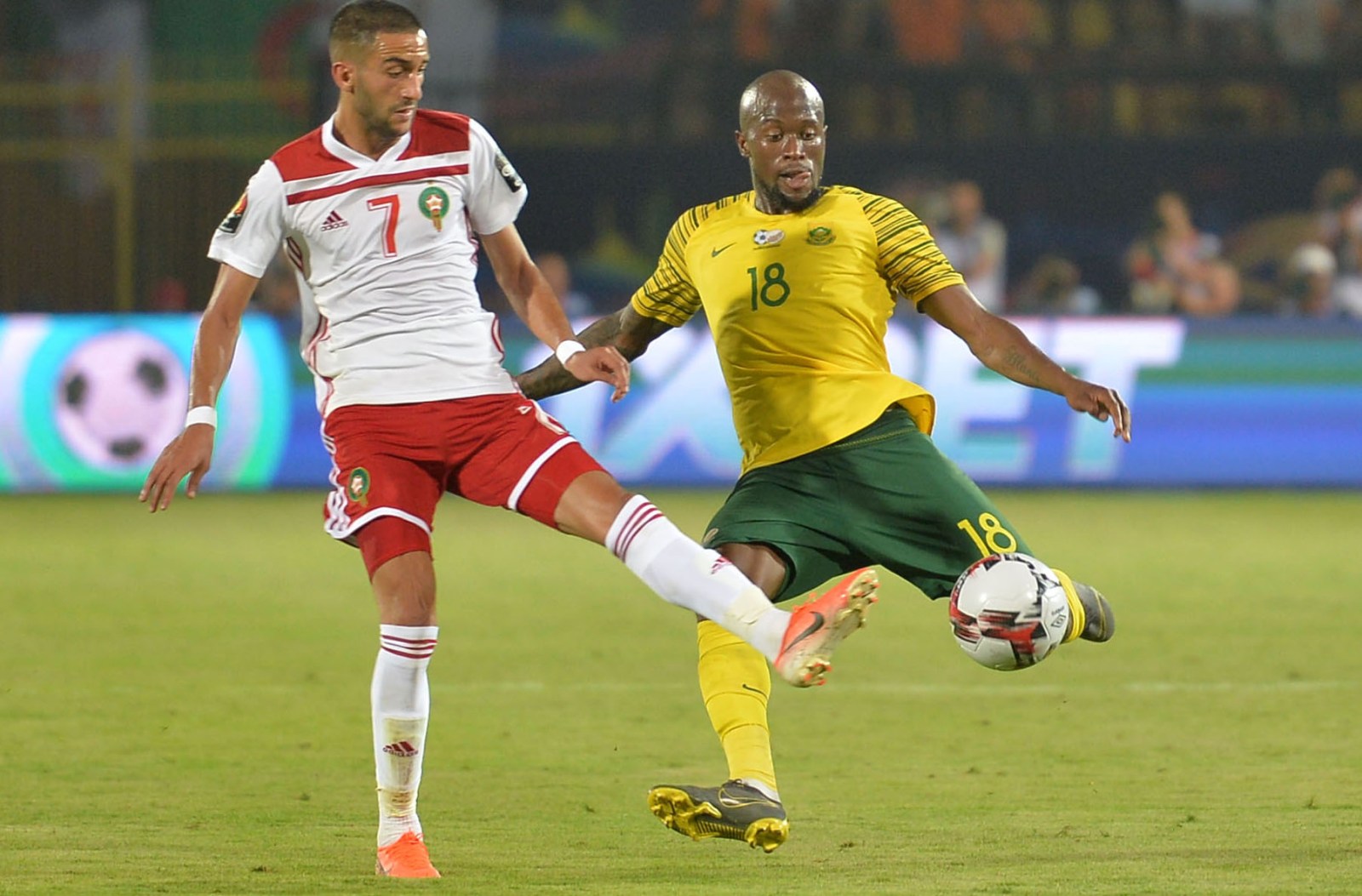 Hakim Ziyech of Morocco and Sifiso Hlanti of South Africa in action during the African Cup of Nations match between South Africa and Morocco at Al-Salam Stadium on July 01, 2019 in Cairo, Egypt. (Photo by Ahmed Hasan/Gallo Images)

The odds are stacked against South Africa in their Africa Cup of Nations qualification opening fixture, versus heavyweights Morocco.

Bafana Bafana begin their quest to qualify for next year’s Africa Cup of Nations (Afcon) in Ivory Coast with a mammoth test against heavyweights Morocco, on Thursday night.

With their struggles to qualify for major tournaments in recent years, expectations are once again low.

However, before their 21-hour trek to the North African country — the overseer of the team’s most recent disappointment, Hugo Broos, said he is hopeful his charges can implement the lessons learnt as they narrowly missed out on topping their World Cup qualifying group in 2021.

The Belgian coach, speaking prior to the side’s departure for Rabat, hinted that his team is out to tame the Atlas Lions, in their own backyard.

“It’s a good team and we have a plan and we’ll be happy if our plan can succeed on Thursday. We know what we have to do and one thing that’s very important is to have the right mentality and confidence because when you go to Morocco with fear it’s better that you stay home,” Broos said.

Though not impossible, a defeat on home soil and in front of their passionate supporters is unlikely for one of five countries set to represent Africa at the 2022 World Cup in Qatar.

In contrast to Bafana’s setup, which mostly consists of locally-based players — the Moroccans boast a number of stars plying their trade in top European leagues. Including Paris Saint-Germain’s Achraf Hakimi and Sevilla’s star goalkeeper Yassine Bounou — who was recently crowned goalkeeper of the season in the Spanish top flight.

In the event that the Atlas Lions’ roar does indeed send quivers down Bafana’s spine, the team will be judged on whether they crumble to the ground and give in, are torn to pieces, or go down fighting.

Broos believes his team will be no pushovers, in spite of the odds being stacked against them. They need the points just as much as Morocco after all.

“It’s the first game of the qualifiers. The first game is always important when you play qualifiers. If you can get a good result, then it makes it a little easier for the next games. Because then you don’t have to chase the other ones… Having a good start is very important,” Broos told the South African Football Association’s media from Rabat.

“The camp is buzzing with positivity. It helps that the core of the team [from the World Cup qualifiers] remains the same, and a happy team means good results in my opinion. We play against each other in the league, and so we are not strangers, we are friends, ready to battle for our place and our country,” added Mamelodi Sundowns’ star fullback Lyle Lakay.

Kick off for the contest is at 9pm South African time. DM