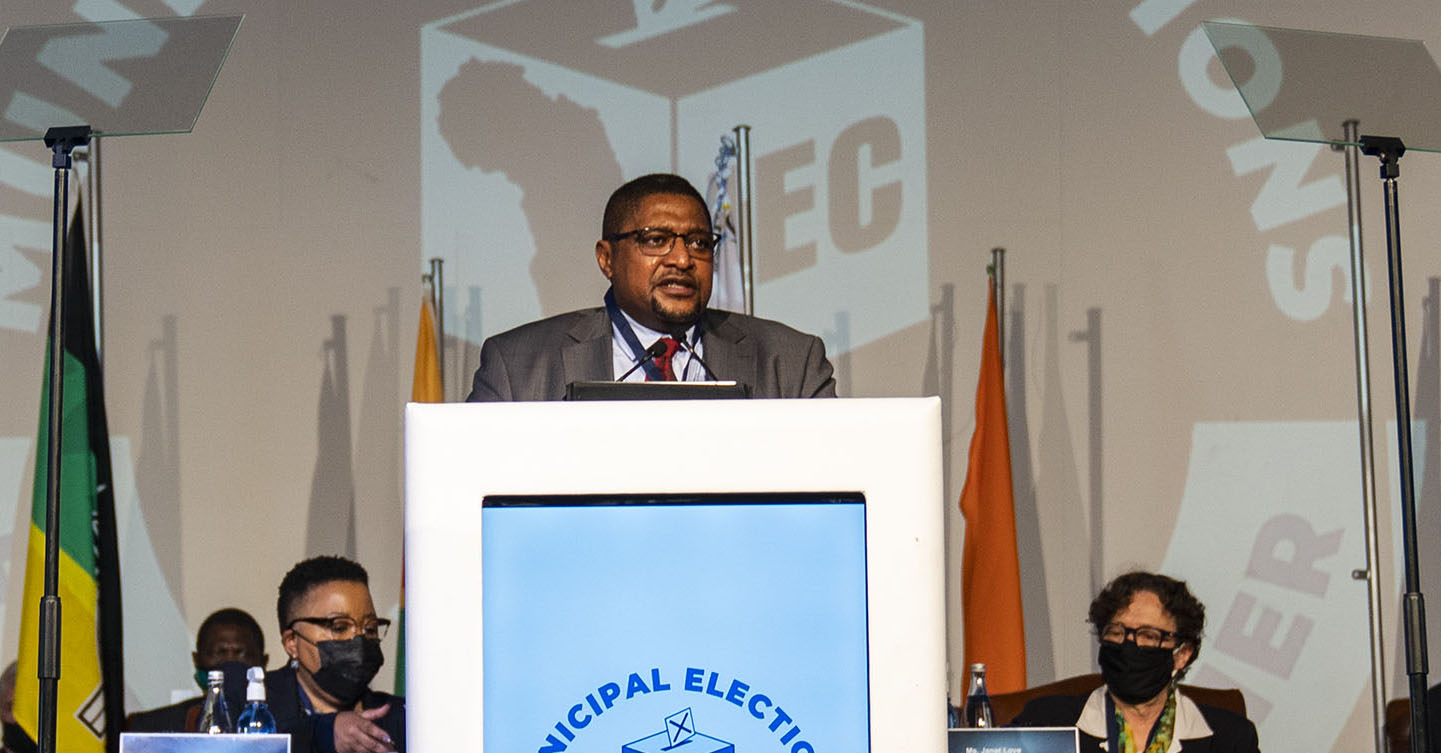 Glen Mashinini (centre) has again been recommended for a commissioner position of the Electoral Commission of South Africa (IEC). (Photo: Shiraaz Mohamed)

It came down to a vote in Parliament’s Home Affairs committee, but Glen Mashinini was recommended as a commissioner on the back of ANC numbers to fill the vacancy on the Electoral Commission that arose because his contract expired in April.

The DA objected to this recommendation and, while the EFF abstained in the vote, it requested its objection also be noted in the report that will go to the House. The IFP did not attend the meeting.

While Glen Mashinini had been appointed as Electoral Commission of South Africa (IEC) chairperson by then-president Jacob Zuma in April 2015 — and as its chairperson in September 2015 — it’s not a given that this will happen again.

Section 7(3)(c) of that law allows for the reappointment for a second seven-year term. All other current commissioners were appointed for their seven-year terms by Ramaphosa in November 2018.

“We had really serious concerns under his leadership you had two major debacles — the fingerprint ink debacle and the voter management devices,” said DA MP Adrian Roos, adding that these concerns were made clear two Fridays ago when the list of candidates was discussed and opposition concerns raised.

His party colleague, DA MP Angel Khanyile, agreed, saying that the failure of the voter management devices on voter registration weekends had effectively disenfranchised those details that had been taken manually, but were never added to the system.

Other opposition parties also had raised their concerns then.

But on Tuesday, the Home Affairs committee held a round-robin vote when all MPs declared their support or opposition to Mashinini’s recommendations. It was done and dusted in no time; a draft report with just a gap for the recommended candidate’s name got Mashinini’s name added, and the report was adopted.

That report recommending Mashinini should fill the vacancy created by the expiry of his term of office will now go to the House for consideration — and possibly a vote.

With just a simple majority needed, this time around it may yet be a tight call — the ANC is down to 230 seats from 249 after the 2014 elections.

Tuesday’s Home Affairs committee decision ends a process to get to this recommendation that had been criticised. When the Daily Maverick in February 2022 reported on the newspaper advert by the Office of the Chief Justice calling for nominations, this seemed to have caught many by surprise.

After an intervention by civil society, My Vote Counts and Council for the Advancement of the South Africa Constitution (Casac), the application period was extended by a week to 25 February 2022.

Of the 48 applications received, 12 candidates were shortlisted, but several withdrew and, following the 1 April interviews, eight candidates were submitted to Parliament for consideration, according to the letter to National Assembly Speaker Nosiviwe Mapisa-Nqakula from Chief Justice Raymond Zondo, dated 7 April.

Why it took a month to reach Parliament’s Home Affairs committee that started dealing with the matter only from 10 May, remains unclear. But after a couple of meetings on 31 May, it was done.

Within about one hour and 40 minutes on Tuesday, the Home Affairs committee not only dealt with the IEC vacancy but also adopted a motion of desirability on the Electoral Amendment Bill.

This comes as the Constitutional Court is set to decide on Parliament’s request for six additional months because it is unable to meet the 10 June 2022 deadline — or two years from the June 2020 judgement — to fix the elections law so independent candidates can contest national and provincial elections.

Almost 18 months lapsed in various ministerial and governing ANC processes before Home Affairs Minister Aaron Motsoaledi tabled a Bill in November 2021. That draft law adopted the minority option for technicist statutory changes that emerged from the ministerial advisory committee report of June 2021, whose majority option had been a wholesale electoral reform to introduce directly elected constituencies. This broad reform, according to Business Day, had been rejected by the ANC National Executive Committee (NEC) in September 2021.

That the ANC had mobilised to ensure the narrowest changes possible emerged also in the countrywide hearings, that took a decided party political character while civil society organisations raised concern over the public hearings. ANC speakers usually identified themselves by branch and ward in their party region, often also seemingly reading off prepared notes, using the same turns of phrases.