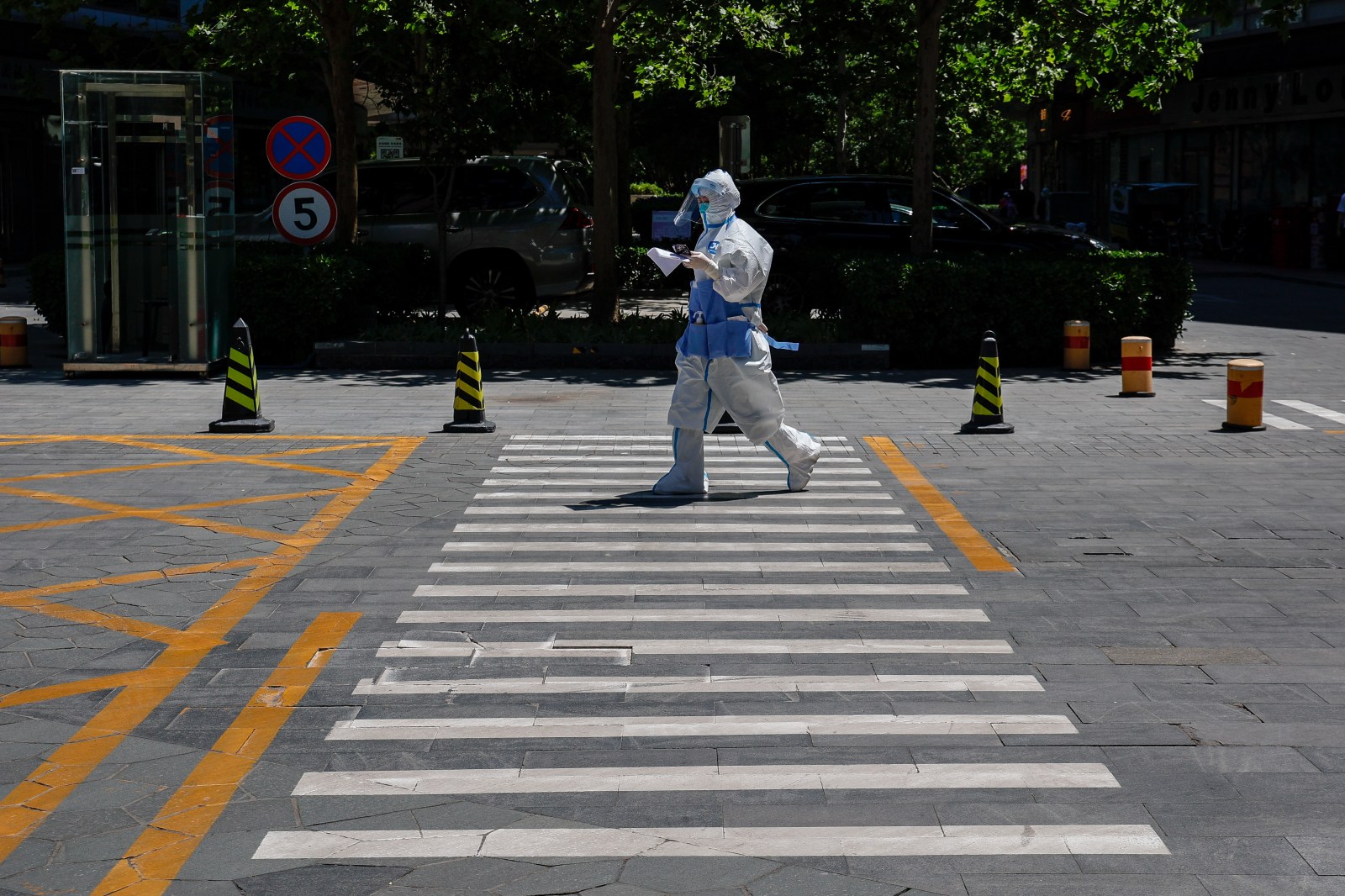 A health worker walks through a residential area in Beijing, China, 26 May 2022. Beijing sacked its top health official as the city battles a COVID-19 surge despite the country's strict zero-COVID policy. Millions of residents were urged to continue to work from home as most of the bus and subway services remained suspended and several establishments closed. EPA-EFE/Mark R. Cristino

BEIJING, May 25 (Reuters) - China's Covid-hit capital Beijing further tightened its dragnet on the virus with zero community transmission the target, punishing workplaces that flout rules or circumvent curbs and imploring residents to police their own movements.

Since late April, the city of 22 million has wrestled with dozens of new cases a day. While these have been mostly in quarantine areas, a handful have been found in the community at large, illustrating the challenge the high transmissibility of the Omicron variant poses even to the world’s most stringent pandemic containment policies.

With Shanghai, China’s business and commercial hub, and numerous other giant cities also shackled by partial lockdowns or other curbs, the zero-COVID approach remains the government’s focus despite the damage it has done to the world’s second-biggest economy and global supply chains.

Zhong Dongbo, a senior Beijing health official, told a news conference on Wednesday that the capital’s COVID battle was at a critical moment, “like a boat sailing against the current and risking falling back if it doesn’t move forward”.

He added, however, that Beijing “cannot quieten down entirely” and needs to keep its economy ticking over, suggesting that officials do not expect a Shanghai-style lockdown.

This week, Beijing has stepped up quarantine efforts and clamped down on workplace attendance, with more districts issuing work-from-home requirements or guidance. It has also cracked down on those that flout its instructions.

In one example, some employees at the state-run Beijing postal service were either dismissed or given a stern warning after a cluster of cases hit a private logistics company within its jurisdiction, the municipal anti-corruption watchdog said late on Tuesday. The regulator said the firm failed to organise COVID tests for its employees and did not follow strict vaccination rules.

In another instance, a handful of employees in Beijing at a branch of the state railway company concealed their travel histories and have been put under police investigation, the watchdog said in a separate statement.

Meanwhile some operations at a big real estate agency in Beijing have been suspended after one employee violated a district-wide requirement to work from home, the municipality’s housing development authority said on Wednesday.

In recent days, Beijing health authorities have been sending out text messages urging people to report themselves if they think they may have visited the same places as those infected.

One Beijing resident surnamed Shi, whose residential building recently exited from a lockdown, said she tried to avoid venturing too far from her home, concerned that she might accidentally enter areas with cases, tainting her COVID health credentials recorded by an app on her phone.

“I basically just walk in areas around my residential compounds, go to the supermarket, and dare not travel too far,” she said.

At Beijing Capital International Airport on Tuesday, a man who only gave his surname as Li said he was flying to Los Angeles to be with his wife and children.

“It’s not as bad as Shanghai, but the restrictions already in place make life quite unbearable as it is,” Li said.

Elsewhere in the country, a series of heavily populated cities were also launching new rounds of mass testing despite caseloads that remain very small by international comparisons.

The northern port city of Tianjin initiated a fresh round of citywide testing on Wednesday after more than a dozen daily new infections emerged this week. Tianjin requires its 14 million residents to keep their movements largely close to where they live and adhere to a “relatively static” mode during the testing.

The northwestern city of Xian advanced a routine mass testing campaign previously scheduled on Friday to Wednesday as the city of 13 million raced to reduce transmission risks after five local infections were found over the past 10 days.

Shanghai, which is aiming for a June 1 exit from a city-wide lockdown, is cautiously unwinding COVID curbs and allowing more of its population of 25 million to venture out.

On Wednesday, Shanghai closed the makeshift hospital at the sprawling Shanghai World Expo Exhibition And Convention Center, which had treated 25,000 of the infected since late March.

Still, most shops, restaurants and businesses remain shut and a work-from-home regime is still in place.

After nearly two months of lockdown, Shanghai’s highly anticipated exit is expected to reignite the engines of its economy.

Exports from the city, the world’s largest container port, dived 44% last month from a year earlier and imports fell by a third, the local statistics bureau said on Tuesday – the steepest declines since at least 2011.

The hiatus has reverberated through global supply chains. Apple Inc AAPL.O has told suppliers China’s lockdowns have hampered the development schedule for at least one of its new iPhones, Nikkei reported on Wednesday.