Boris Johnson takes responsibility but will not quit ov...

Boris Johnson takes responsibility but will not quit over lockdown parties 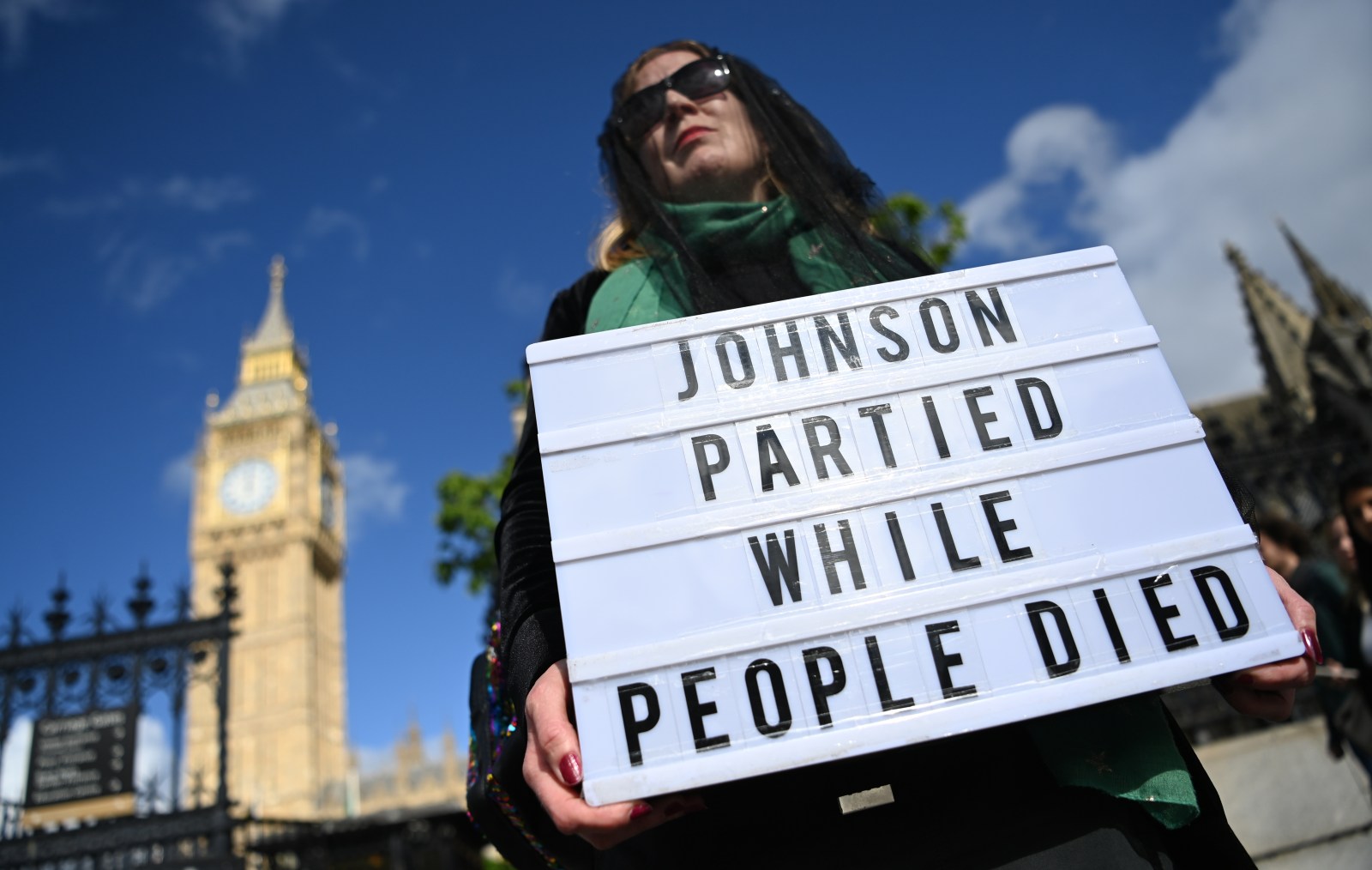 A protester demonstrates against the Downing Street parties, outside parliament in London, Britain, 25 May 2022. British Prime Minister Boris Johnson is under pressure over 'party gate' allegations following new photographs showing him at a drinks party during lockdown. EPA-EFE/ANDY RAIN

LONDON, May 25 (Reuters) - Boris Johnson said he was humbled and took responsibility but refused to quit after a damning official report on Wednesday detailed a series of illegal lockdown parties at the British leader's Downing Street office.

Opposition politicians and some in his own party have repeatedly called for him to resign over the alcohol-fuelled gatherings in violation of COVID-19 rules all but banning people from socialising outside their households.

“I am humbled and I have learned a lesson,” Prime Minister Johnson told parliament, saying he would not quit.

The report by senior official Sue Gray did not specifically blame Johnson, but included photographs and gave graphic details from more than a dozen gatherings.

He attended some, including a party to celebrate his 56th birthday on June 19, 2020, for which he was fined but which Gray said he was unaware of in advance. Johnson’s wife Carrie and finance minister Rishi Sunak were also fined for that event.

“Many of these events should not have been allowed to happen,” Gray said. “The senior leadership … must bear responsibility for this culture.”

Johnson, who commissioned the report, said he was appalled by some of the behaviour it had uncovered but that attending leaving events to thank colleagues was part of his job.

“Some people will think it was wrong even to do that, I have to say I respectfully disagree,” he told a news conference.

Gray’s interim findings were published in January, but details were withheld until the end of a police inquiry that concluded last week with 126 fines handed out.

A YouGov opinion poll found 59% of Britons thought Johnson should resign following the report, but just 7% think he will. Three quarters said they believed he knowingly lied about whether he broke COVID-19 rules.

DISMAYING BEHAVIOUR AT ‘HEART OF GOVERNMENT’

Her full report included emails and messages that showed many gatherings were planned in advance, with discussions on who would bring alcohol – drinks that “we seem to have got away with”, the then-head of Johnson’s office, Martin Reynolds, said in one message.

There were warnings from another official that people should not be “waving bottles of wine” before a gathering that coincided with a televised news conference when ministers told the public to follow the COVID-19 rules.

At one June 2020 event, Gray said “excessive alcohol consumption” led to one person being sick and a fight between two others.

At another, the night before the April 2021 funeral for Queen Elizabeth’s husband Prince Philip, individuals partied into the early hours and damaged a child’s swing.

“The public have a right to expect the very highest standards of behaviour in such places and clearly what happened fell well short,” Gray said.

She cited multiple examples of a lack of respect and poor treatment of security and cleaning staff who had to remove red wine from walls after one event.

For months, evidence of the parties has dripped out into the media, forcing Johnson to apologise, change his office team and promise a reset to try to restore his authority.

Opposition Labour leader Keir Starmer said Johnson should quit and that the report showed the government believed there was one rule for them and another for everyone else.

“You cannot be a lawmaker and a law-breaker,” Starmer – himself under police investigation for a possible breach of COVID rules, told parliament. He has said he’ll resign if fined.

Johnson’s immediate fate lies in the hands of his Conservative lawmakers who can call for a confidence vote. Many had said they would wait for Gray’s full report before deciding.

One who had reserved judgment, Julian Sturdy, said he now felt it was in the public interest for Johnson to resign.

“This is clearly a time when we cannot have any doubt about the honesty, integrity and personal character of the prime minister,” he said.

Others felt the report was less damning than it could have been, with one describing it as “banal”.

Johnson later addressed a meeting of his lawmakers, at which one present said he was “calm, thoughtful, serious”.

“He did well, the sense is he is no longer in danger,” the Conservative, speaking on condition of anonymity, said.

Johnson had initially denied there had been rule-breaking at Downing Street, and some lawmakers say his position is untenable if he is found to have lied to parliament, a matter under investigation by the Committee of Privileges.

By way of apology, he said he wanted to “correct the record” that no rules were broken. “Clearly this was not the case for some of those gatherings after I had left,” Johnson told parliament.

By Elizabeth Piper and Muvija M