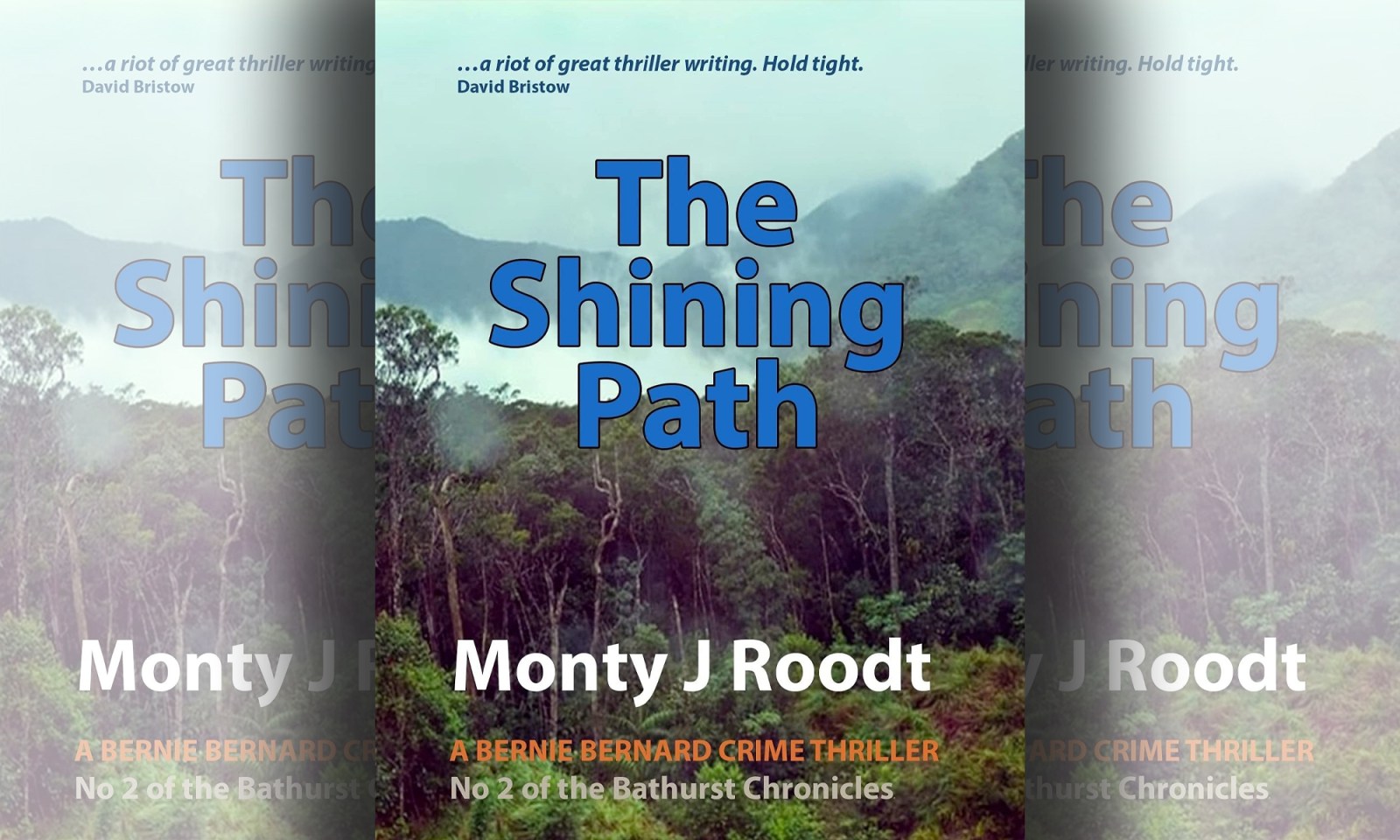 ‘The Shining Path’ is a riveting read with a clever and engaging plot, excellent characterisations, seamless dialogue and an intrigue with as many twists and turns as the Amazon River, along which most of the action takes place.

The Shining Path – a Bernie Bernard Crime Thriller by Monty Roodt, author and Emeritus Professor of Sociology at Rhodes University, is, the cover informs us, number two in the series of the Bathurst Chronicles featuring backwater Eastern Cape sleuth Bernie Bernard (I have read number one – more on that later).

Crime thrillers are among the most popular fiction genres and South Africa is lucky to have a few of the finer practitioners of the art, including, of course, Deon Meyer, Lauren Beukes and Mike Nicol. In fact, you’d have to be a pretty mediocre writer not to make at least some dent on the market.

Then again, getting published is a very hard road and self-publishing – while attractive to many prospective authors – has its pitfalls and barriers. Roodt has chosen the self-publishing route, and kudos to him, because he’s done it well… this time.

When self-publishing, it’s normal to lean on friends and call in favours to get various jobs done, like editing, proofreading, text and cover design: and therein lie many of the weaknesses of this system.

His first book, Dead Man’s Land: A Bernie Bernard Crime Novel. No 1 of the Bathurst Chronicles, had a compelling plot revolving around the murder of an egotistical and bigoted farmer at a time when Bathurst is seething with political tensions. We presume, therefore, that the murder is politically motivated.

I shan’t offer any spoiler there, but rather focus on the actual production of the book: to be brief, but a little brutal, the text was not well edited or proofread, the characters were not as well developed as they might have been, the dialogue is stodgy in places and the cover – let’s just say it is more art than commercial.

However, in The Shining Path, the author clearly put into practice everything he learned in round one. In short, it’s a riveting read with a clever and engaging plot, excellent characterisations, seamless dialogue and an intrigue with as many twists and turns as the Amazon River, along which most of the action takes place.

The book opens inside the famed Pig and Whistle pub in Bathurst, where Bernie is telling the patrons about an incident that befell him while on vacation in Peru, ostensibly visiting his brother who is involved in some unspecified business.

The Pig turns out to be a literary device, much like those used by Joseph Conrad in novels such as Lord Jim and Heart of Darkness, where a narrator is placed in some static place only to divulge the details of a much greater adventure elsewhere.

The main action of the book kicks off in the steamy jungle town of Iquitos where the narrator is ensconced at the Malorca restaurant-bar, a South American replica of the Pig and Whistle where the flotsam and jetsam of the river wash up.

Things take the inevitable turn for the worse when our hero decides to go on a caper upriver. Pirates attack the boat, Bernie is captured and then traded to guerillas of the Sendero Luminoso – Shining Path – revolutionary movement.

When they realise what kind of fish they have caught in their extortion net, they hatch a plan to use him as bait in order to lure his brother into a gun-smuggling operation back in murky Iquitos.

Zippy little carts transport us deep into the rainforest where the rebels have a base, and Bernie is bound and thrown into a dark room.

Just about the time we are clinging to our chairs, the story loops back to the cosy confines of the Pig, where the rapt audience is held captive. As are we. While detained (and occasionally tortured) Bernie gets himself entangled, much against his will, in the politics of the place as well as with one of his guards, an attractive Peruvian who is also a fervent revolutionary.

The final theatre of action plays out among the bleak saltpans and chilly settlements of the high Altiplano where the Sendero leaders hide out, living the high life, smoking Cuban cigars and playing ruthless games with people’s lives. But let’s leave it there.

Clearly the author knows his way around Peru, with evocative descriptions of the country. Especially vivid is his portrayal of the sticky town of Iquitos and the Malorca restaurant, where you imagine he probably cooked up this crazy story after a number of cervezas. Or it might have been at the Pig, which happens to be located in his home village.

Disclosure: The cover endorsement tells us the book is “a riot of great thriller writing. Hold tight!” And I should know because I wrote that. I’m a friend of the author and I just hope he is taking a break from his cheese-making and other eccentric activities in sleepy Bathurst to work on book number three. DM/ML