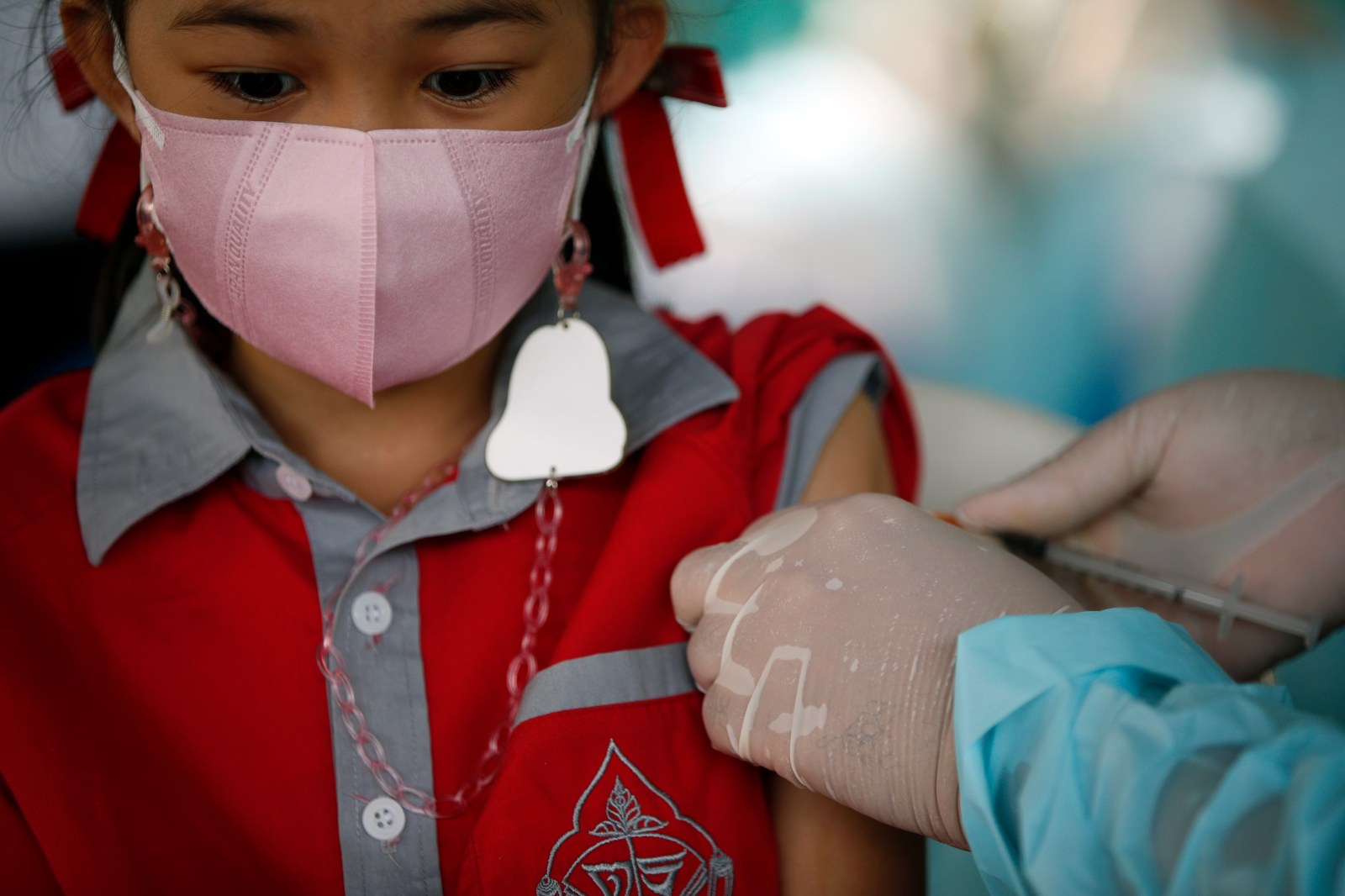 A Thai student receives a dose of Pfizer-BioNTech vaccine against COVID-19 during the second shots vaccination drive for children aged five to eight years, in Bangkok, Thailand, 18 May 2022. The Thai government is on track to declare the COVID-19 coronavirus disease pandemic as an endemic disease by 01 July 2022, despite the improving situation allowing people to return to a normal life after two years of combatting the virus. EPA-EFE/RUNGROJ YONGRIT

May 23 (Reuters) - Drugmakers Pfizer Inc PFE.N and BioNTech SE 22UAy.DE said on Monday that three doses of their Covid-19 vaccine generated a strong immune response in children under the age of five in their clinical trial.

The companies said the vaccine was safe and well-tolerated by the children, and they plan to soon ask global regulators to authorize the shot for the age group, children for whom no vaccine is currently approved in most of the world.

They expect to complete their submission of data to the U.S. Food and Drug Administration (FDA) this week, they said.

“The study suggests that a low 3-microgram dose of our vaccine, carefully selected based on tolerability data, provides young children with a high level of protection against the recent COVID-19 strains,” BioNTech Chief Executive Ugur Sahin said in a statement.

The drugmakers said that an early analysis of 10 symptomatic COVID cases identified through April 29, while the Omicron variant was dominant, suggested vaccine efficacy of 80.3% in the under-five age group. This analysis is not conclusive, as the trial’s protocol specified that efficacy should be calculated based on at least 21 cases.

Pfizer and BioNTech said final efficacy data in the age group will be shared when it is available.

The drugmakers had previously tested two doses of the 3 microgram vaccine in the children. But the two-dose trial failed to meet its primary endpoint after results for two to four-year olds showed a weaker immune response than in adults.

The 1,678 trial participants received their third dose at least two months after their second shot. Pfizer said the vaccine was well tolerated, with most adverse side effects being mild or moderate.

It’s not clear how many U.S. parents will vaccinate their children in the age group. Only 29% of five to 11-year-olds in the country are fully vaccinated, and COVID is generally more mild in children than adults.

U.S. regulators are already preparing to review the data in younger children as well as data submitted by rival vaccine maker Moderna Inc MRNA.O for children under the age of six. A committee of the FDA’s external advisors is scheduled to meet on June 8, 21 and 22 in order to consider the use of the two vaccines in younger people.

Moderna released trial data in March showing that its vaccine was safe and generated a similar immune response in young children as for adults.

The company said two 25 microgram shots of its vaccine were around 37% effective in preventing infections in two to five-year-olds, and 51% effective for children aged six months to two years.