Courage, charisma not enough to defeat Zanu-PF in Zimbabwe’s 2023 elections 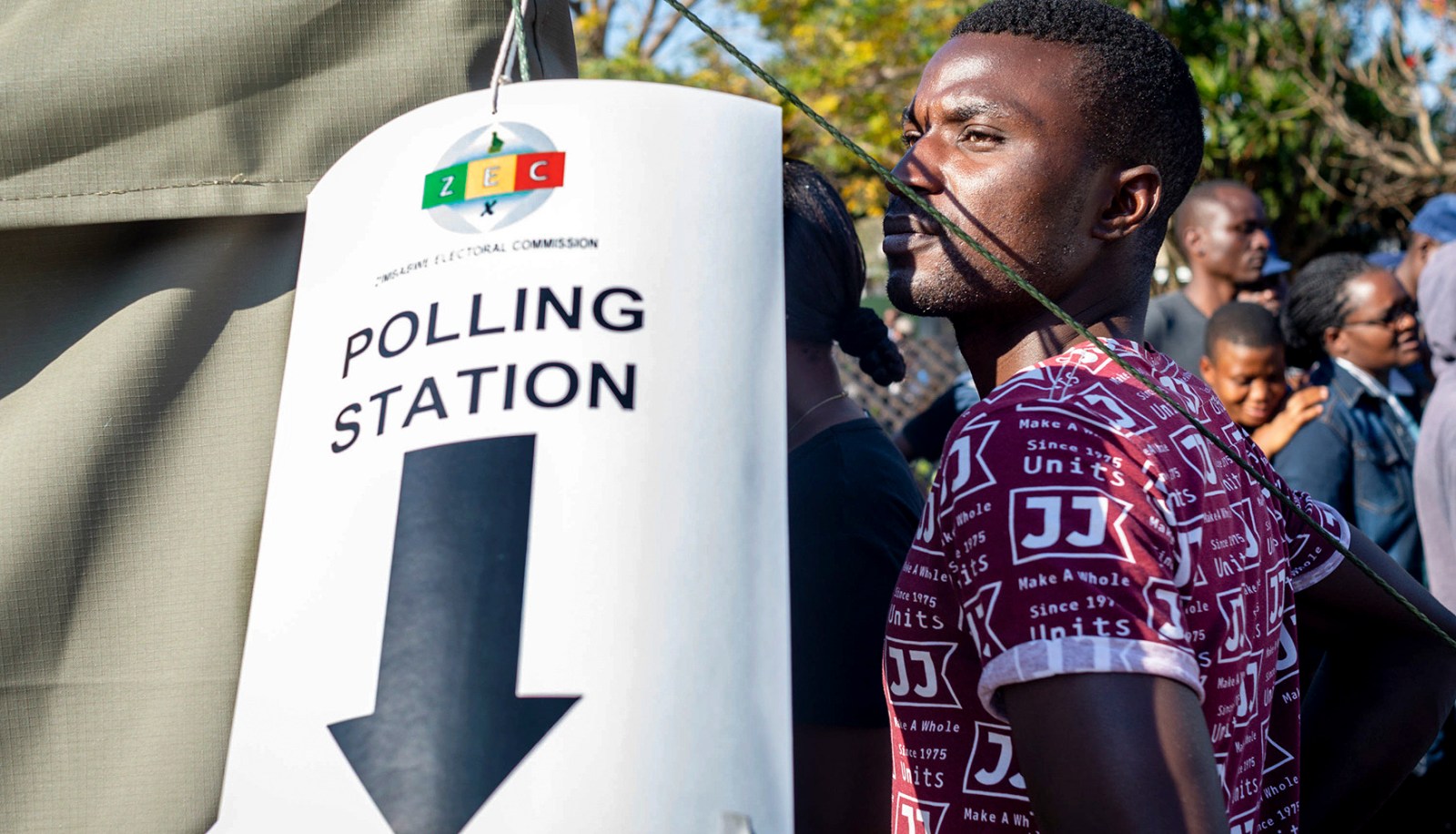 A Zimbabwean voting official stands outside a polling station on election day in Harare, Zimbabwe, 30 July 2018. Zimbabweans were called to choose between 23 presidential candidates and more than 120 parties who had registered to take part in the elections. (Photo: EPA-EFE/YESHIEL PANCHIA)

There are new contenders, but the political playing field is as unbalanced as under Robert Mugabe.

With 14 months to go before Zimbabweans elect a president, members of parliament and local government representatives, the country is in full election mode. The ruling Zimbabwe African National Union-Patriotic Front (Zanu-PF) has ramped up its campaign while a new opposition party has sparked hope of a meaningful democratic contest. But the political and electoral playing field remains deeply uneven and stacked in favour of the ruling party.

Zanu-PF’s campaign is a mix of state events and party activities, with the national broadcaster doing the party’s bidding. Meanwhile, Nelson Chamisa’s political opposition, Citizens Coalition for Change (CCC) — which put up a spirited performance during the recent by-elections — is trying to establish itself while simultaneously preparing for the 2023 polls.

The CCC, unveiled on 22 January, was greeted with excitement, and the new political outfit was emboldened by its performance in the March by-elections. Yet nuanced analysis of the political terrain after the by-elections shows that Zanu-PF’s position as the ruling party is safe so far.

The CCC’s performance was impressive. With less than a month to mobilise and gain traction, the party posted significant wins. It showed political prowess to turn the tide in the by-elections, winning 19 of the 28 seats up for grabs. However, its candidates were previous holders of 21 of 28 seats. In effect, the party managed to return 19 seats and lost two.

Zanu-PF on the other hand retained all the seats it previously held in both Parliament and local government, and took two more from the opposition.

As the country stumbles towards the 2023 polls, Zanu-PF’s dominance and the half-hearted implementation of the Southern African Development Community’s (SADC) election guidelines mean the journey will be arduous for opposition parties.

The political and electoral playing field remains as in the days of Robert Mugabe. The ruling party has all but perfected its messaging, its use of the law and security institutions against opponents, and the conflation of party and state resources to boost its position.

Zimbabwe’s electoral management body, the Zimbabwe Electoral Commission (ZEC), remains one of the country’s least-trusted institutions. The body is populated by former military officials who aren’t known for their impartiality. Some analysts have noted that the military has positioned itself as the final arbiter in the country’s political power configuration.

Recent efforts by activist groups like Team Pachedu revealed attempts at gerrymandering by the ZEC. The revelations cast doubts over the commission’s credibility and the integrity of any electoral process it presides over.

What’s more, traditional leaders — who are custodians of decisive rural constituencies — are still brazenly partisan. The few who have accommodated different views were stripped of their chieftainship and replaced, enabling Zanu-PF to maintain its hold over the rural vote.

However, there are some things the opposition parties can do to tilt conditions in their favour. And SADC can encourage fair elections by pressuring Zimbabwe to implement the letter and spirit of its guidelines.

Sound internal party structures and institutional capacity are key to robust election campaigns. Experienced technocrats are needed to manage the campaign, rather than party cadres, as is the trend in Zimbabwean politics. Deploying people whose only skill set is courage and charisma won’t be enough to beat Zanu-PF at the polls.

Rather than relying on emotive approaches, political parties need to examine data and voter behaviour to craft targeted communication strategies in place of rhetorical messaging. The hackneyed ‘Zanu-PF must go’ slogan won’t cut it. The by-election results show a dip in support for the opposition even in the areas they won. And while Zanu-PF’s figures also dropped, it had significantly higher margins in its strongholds.

Opposition parties cannot afford to base their electoral position on political posturing — they need solid groundwork. A comprehensive strategy should look at the overall political environment and honestly assess the opposition’s chances of unseating the ruling party. Carefully articulated messages and localised campaigns are needed to make inroads in Zanu-PF power bases.

Given the level of investment Zanu-PF puts into the rural electorate, the opposition needs real, sustained engagement with these voters beyond the electoral cycle. The mammoth task of winning over people fed and sustained by Zanu-PF cannot be a once-off event as polls approach.

Opposition parties need water-tight systems that track the political environment and the integrity of the electoral management body. This can be done by including a robust parallel voter tabulation system, well-trained and equipped polling station party agents, targeted voter mobilisation and using domestic laws to enforce fairness.

SADC also needs to be persuaded to apply pressure to level the playing field, as occurred in 2008. The regional bloc has a stake in the election as it strives to enhance democracy and good governance. It must ensure its election guidelines are implemented and outline exactly how Zimbabwe’s electoral management body can address the concerns raised in SADC’s reports from the 2013 polls.

Without freedom of association, access to information, fair coverage of all parties by the state media and transparency and impartiality by the electoral management body, Zimbabwe’s 2023 elections won’t be free and fair. The credibility of the ZEC is central to this goal, and to date, the body has fallen short. DM