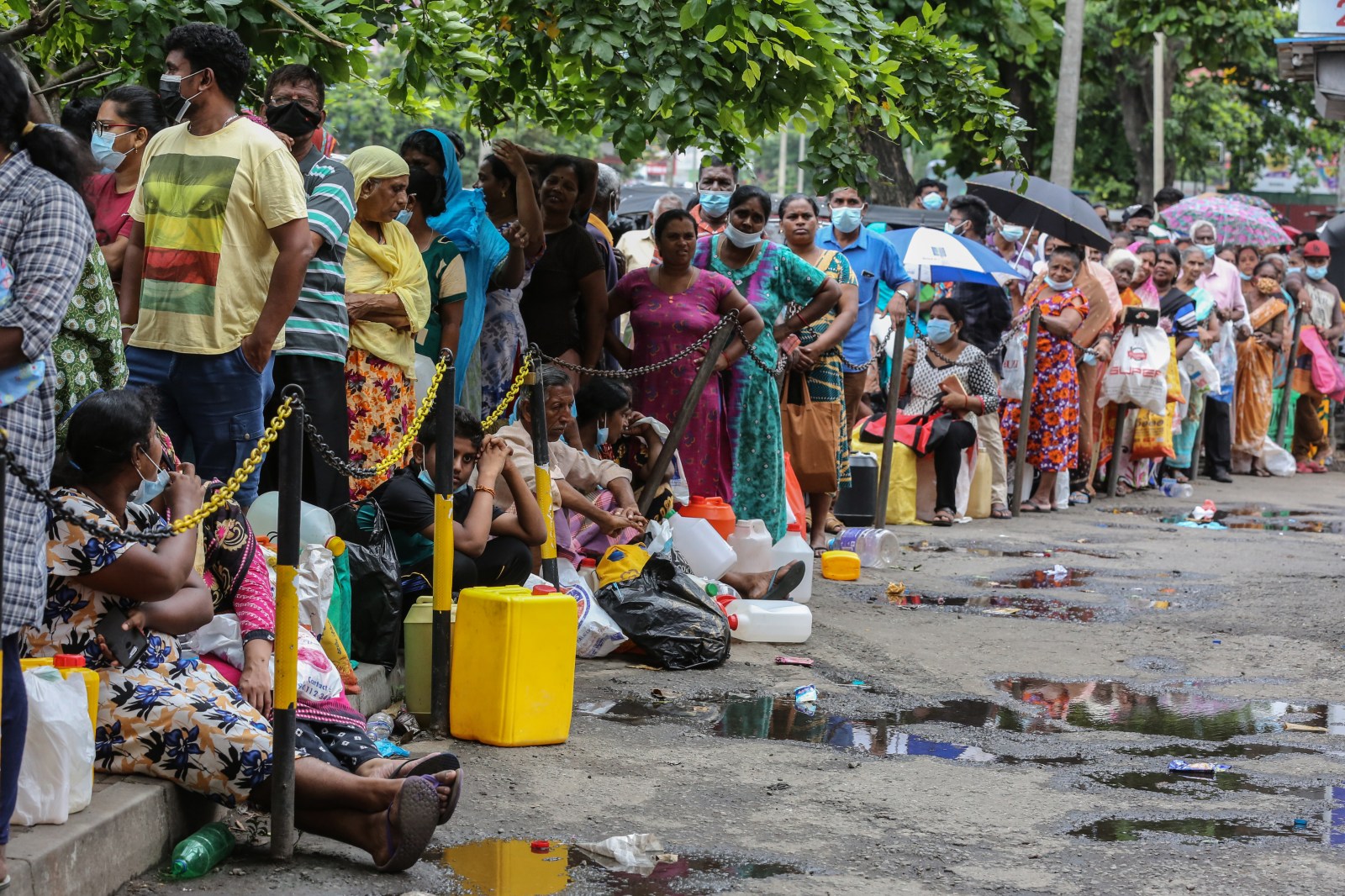 People wait to buy kerosene at a gas station amid a fuel shortage in Colombo, Sri Lanka, 18 May 2022. Protests have been rocking the country for weeks, calling for the resignation of the president over the alleged failure to address the worsening current economic crisis. Sri Lanka faces its worst economic crisis in decades due to the lack of foreign exchange, resulting in severe shortages in food, fuel, medicine, and imported goods. EPA-EFE/CHAMILA KARUNARATHNE

COLOMBO, May 20 (Reuters) - Thousands of people queued for cooking gas and petrol in Sri Lanka's commercial capital on Friday and Prime Minister Ranil Wickremesinghe warned of a food shortage as the island nation battles a devastating economic crisis.

Lines formed in many parts of Colombo, a city of around 900,000 people, as residents tried to stock up on fuel, which is mostly imported and is in extremely short supply with the government running out of foreign exchange.

“Only about 200 cylinders were delivered, even though there were about 500 people,” said Mohammad Shazly, a part-time chauffeur in a queue for the third day in the hope of procuring cooking gas for his family of five. Hundreds of others were in line, with empty cylinders by their side.

“Without gas, without kerosene oil, we can’t do anything,” Shazly said. “Last option what? Without food we are going to die. That will happen hundred percent.”

Tourism-dependent Sri Lanka, where India and China jostle for influence, is facing a dire shortage of foreign exchange, fuel and medicines, and economic activity has slowed to a crawl.

Public transport is depleted and traffic is light as most people are staying at home because of the scarcity of petrol.

Wickremesinghe, warning also of a food crunch, vowed to buy enough fertiliser for the next planting season to boost productivity and meet the food demand of its 22 million population.

A decision in April last year by President Gotabaya Rajapaksa to ban all chemical fertilisers drastically cut crop yields and although the government has reversed the ban, no substantial imports have yet taken place.

“While there may not be time to obtain fertiliser for this Yala (May-August) season, steps are being taken to ensure adequate stocks for the Maha (September-March) season,” the prime minister said in a message on Twitter late on Thursday.

“I sincerely urge everyone to accept the gravity of the … situation.”

Japan, which has long-standing economic ties with the island, said it would provide an emergency grant of $3 million for medicine and food, its foreign ministry said.

When a truck arrived at a cooking gas distribution centre with fresh supplies, soldiers with automatic rifles guarded the vehicle while people in the queue applauded.

State-run Litro Gas is hoping to start distributing 80,000 cylinders a day by Saturday but has to scramble to fill an estimated 3.5 million cylinder shortage in the market, Chairman Vijitha Herath told Reuters.

The government has also called for tenders to procure $120 million worth of cooking gas under a larger $1 billion credit line from India.

However prices have surged, for cooking gas as well as food and other essentials.

“There is no point in talking about how hard life is,” said A.P.D. Sumanavathi, a 60-year-old woman selling fruit and vegetables in Colombo’s Pettah market. “I can’t predict how things will be in two months, at this rate we might not even be here.”

Inflation could rise to a staggering 40% in the next couple of months but it was being driven largely by supply-side pressures and measures by the central bank and government were already reining in demand-side inflation, the bank has said.

As anger against the government spreads, police fired tear gas and water canon to push back hundreds of student protesters in Colombo on Thursday. The protesters are demanding the ouster of the president as well as the prime minister.

The economic crisis has come from the confluence of the COVID-19 pandemic battering tourism, rising oil prices and populist tax cuts by the government of President Rajapaksa and his brother, Mahinda, who resigned as prime minister last week.

Critics accuse Wickremesinghe, appointed prime minister in his place, of being a stooge of the brothers, an accusation he denies.

Nine new members were appointed to the cabinet on Friday, including to the critical health, trade and tourism ministries. But no one has been named to head the finance ministry and lead negotiations with International Monetary Fund for a bail-out. The portfolio is likely to be retained by Wickremesinghe.

A spokesperson for the IMF said it was monitoring developments very closely and that a virtual mission to Sri Lanka was expected to conclude technical talks on a possible loan programme on May 24.

The Group of Seven economic powers supports efforts to provide debt relief for Sri Lanka, group finance chiefs said on Thursday in a draft communique from a meeting in Germany after Sri Lanka defaulted on its sovereign debt.

Central bank chief P. Nandalal Weerasinghe has said advisers for undertaking debt restructuring were almost finalised and he would be submitting a proposal to the cabinet soon.

“We are in pre-emptive default,” he said. “Our position is very clear, until there is a debt restructure, we cannot repay.”

By Devjyot Ghoshal and Uditha Jayasinghe