Marikana – a massacre still without any criminal consequences 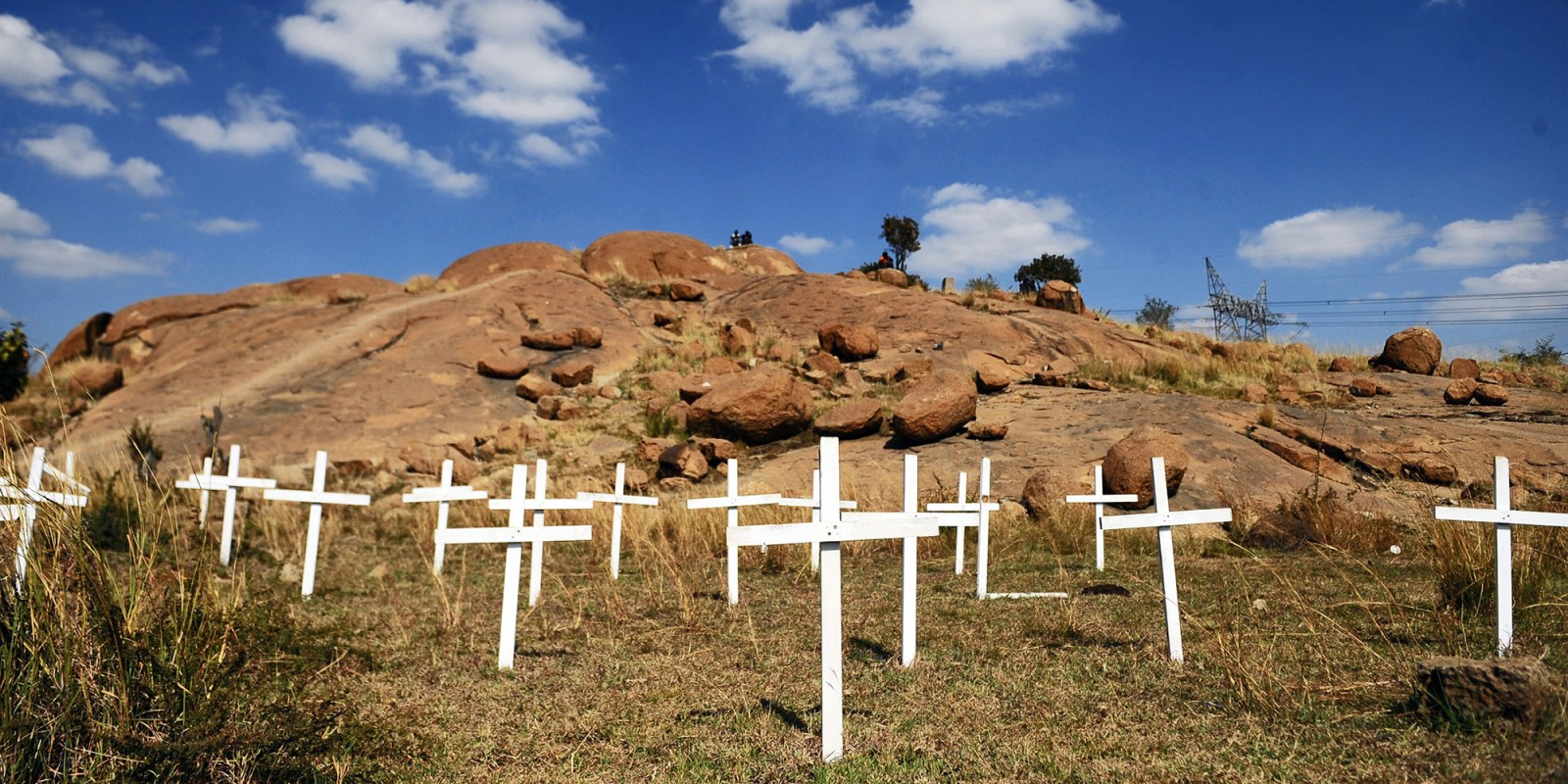 Crosses placed for the 34 miners killed in the Marikana massacre in Rustenburg. (Photo: EPA / STR)

Not a single SAPS member has been charged for the killing of 34 people in Marikana on 16 August 2012. In the latest in our Lest We Forget series, which revisits issues that demand accountability, we look at the ongoing fight for justice for the Marikana victims.

In under three months, thousands of mineworkers will gather near the koppie in Marikana to mark 10 years since police killed 34 of their colleagues on the afternoon of 16 August 2012. As they have done every year since the massacre, widows, union bosses, politicians and religious leaders will demand that those responsible be prosecuted and jailed.

A decade on, despite a commission of inquiry that cost R153-million and sat for 300 days over two years, not a single person has been charged for the killings. That’s not exactly true: police unlawfully arrested, and tortured, 270 of the striking mineworkers and charged them with common purpose, accusing them of causing the deaths of their colleagues.

Not a single police officer has been charged for the killings on 16 August 2012, when SAPS commanders, under political pressure, declared D-Day on the strike at Lonmin, where 10 people had already been killed, and implemented a plan they knew would cause fatalities. Where mineworkers were corralled into a line by Tactical Response Team officers, killing 17 people at what became known as Scene One, before the police pursued fleeing strikers and killed another 17 at Scene Two.

“The NPA’s [National Prosecuting Authority’s] failure/refusal to prosecute the killings of the 16th shows a blatant lack of political and executive will to ensure that justice for Marikana is fully served,” said Asenati Tukela, an attorney at the Socio-Economic Rights Institute (Seri), which represents the families of the deceased mineworkers.

Retired Judge Ian Farlam, the commission of inquiry’s chairperson, and his fellow commissioners, Pingla Devi Hemraj SC and Bantubonke Tokota SC, must shoulder some of the blame. The mineworkers’ widows were shuttled back and forth from other provinces to attend the inquiry’s hearings, exposing themselves to further trauma as they sought details on how their loved ones died and who was responsible.

Farlam’s report offered only vague accounts of the killings of the mineworkers (attacks on the police received more detailed attention) and made generalised recommendations for investigation and prosecution. Without naming suspects, Farlam admitted SAPS members might be guilty of attempted murder, but essentially, while unearthing significant evidence, he passed his responsibilities on to the Independent Police Investigative Directorate (Ipid) and the NPA.

NPA North West spokesperson Henry Mamothame did not reply to emailed questions, but in August 2021 NPA national spokesperson Mthunzi Mhaga told City Press that Ipid had not completed its investigations due to “severe capacity constraints”, with only two of an original seven investigators on the case.

Farlam did explicitly say that Major-General Ganasen Naidoo, a deputy commissioner in North West, should be investigated with a view to prosecution. Naidoo diverted paramedics from providing medical attention at Scene One, causing the death of Bongani Mdze, who was shot in the arm and would have survived if a tourniquet had been applied, and fired his weapon at Scene Two, despite being told to cease fire. He still hasn’t faced prosecution.

The Farlam Commission’s general failure to make findings against specific officers was in part due to a coordinated campaign by the police to hide and falsify crucial evidence. But in their final submissions to the inquiry, Seri and the SA Human Rights Commission went further in piecing together evidence on each death, naming the SAPS commanders who failed to stop the killings when they had the opportunity and listing shooters at Scene Two who could potentially be held criminally liable.

“They say in this country we’re free, but only some are free, others are not. A policeman has the power to kill and it’s not a big deal. Justice is not a real thing. I have not seen it,” Zameka Nungu, whose husband Jackson Lehupa was killed on 16 August 2012, told Daily Maverick in Marikana in 2019.

The state has paid more than R70-million in compensation for the loss of support to 34 families of those who died at Marikana. But their claims for constitutional and general damages have stalled. The state has reportedly offered R500,000 to each family, but Seri’s Tukela explained that his clients believe compensation for general and constitutional damages should be catered to each family’s specific circumstances. They plan to take the issue to court.

The injured and arrested mineworkers have also launched a court application to hold President Cyril Ramaphosa and Sibanye-Stillwater, which bought Lonmin’s Marikana operations in 2019, liable. Ramaphosa was a non-executive director at Lonmin at the time of the massacre and infamously emailed a company executive calling for “concomitant action” to the violence.

He is accused of pressuring then police minister Nathi Mthethwa and mining minister Susan Shabangu to treat the violent strike as a criminal rather than a labour dispute. In anticipation of its move to end the strike, police deployed hundreds of officers to Marikana, ordered 4,000 rounds of ammunition and requested four mortuary vans.

The injured and arrested mineworkers, who have repeatedly tried to hold politicians and mining company officials accountable, want Ramaphosa held financially liable and for him to be ordered to issue an apology. The case is expected to begin on 2 June in the Johannesburg High Court.

A number of police officers, including former North West deputy commissioner William Mpembe and five others, are on trial for their roles in the five deaths on 13 August 2012, when the police confronted the striking mineworkers, leading to the killing of two SAPS members and three strikers.

Mpembe and three SAPS members were this year found not guilty of defeating the ends of justice for allegedly lying about the death of Modisaotsile van Wyk Sagalala, who died in a van outside a detention centre, rather than in hospital as the police claimed.

A criminal case against 17 striking mineworkers, charged with a number of offences related to the lead-up to the massacre, when the two police officers, two Lonmin security guards and six mineworkers were murdered, is expected to resume on 27 May in the North West High Court pending a review application in another court. DM