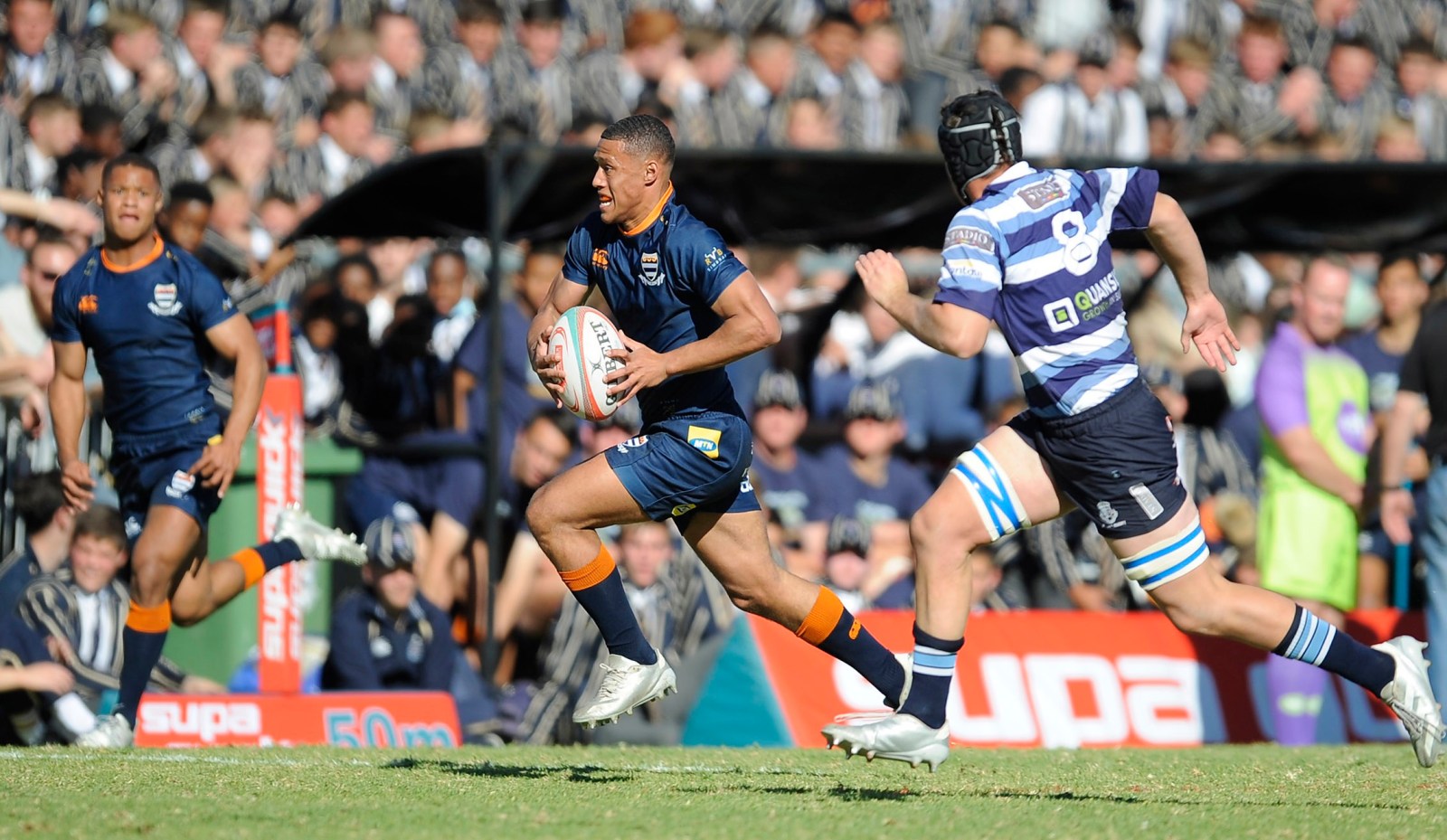 Caleb Abrahams of Grey College (ball in hand) breaks the line with Paarl No 8 Hugo Ben Horn (PBH) chasing him down during the Premier Interschools match between Grey College and Paarl Boys High School at Grey College on May 14, 2022 in Bloemfontein, South Africa. (Photo by Charle Lombard/Gallo Images)

The schoolboy rugby season is in full swing with several traditional powerhouse clashes at the weekend.

In another pulsating weekend of schoolboy rugby, it was Grey College from Bloemfontein who secured victory at home against rivals Paarl Boys while Paul Roos beat South African College School (SACS) in wet conditions in Cape Town.

Two of South Africa’s oldest schools, Grey College and Paarl Boys High, both with a rich rugby history and rivalry met in Bloemfontein on Saturday.

A composed and clinical second-half performance from the home Grey team ensured a comfortable 21-12 victory for the Bloem boys.

“It’s a traditional rivalry. I think it was tough fought, the first half especially. I think the tempers and the build-up led to a pretty tough first half but luckily we got a few lucky bounces our way early in the second half from kicks that I think swung the momentum a bit our way,” said Jannie Geldenhuys, head coach of Grey College to Daily Maverick after the encounter.

The scoreline read 0-5 in favour of the visiting Paarl Boys team at halftime but a change of tactics led to a more structured and composed Grey College performance in the second stanza as they scored three converted tries.

“The first thing was just to get in the right areas of the field, we thought that we played too much rugby in our own half, we tried to get out of our own half a little bit easier,” Geldenhuys said.

“Then we needed possession. We had very little possession in the first half. When we got the ball, we just said ‘listen, let’s just try to keep the ball for a few phases, let’s really put some stress on their defence and see what happens’. That was the main message heading into the second half.”

Grey College’s halfback pairing of Caleb Abrahams and Bradley Giddy led the way by ensuring the game was played in Paarl Boy’s half. Scrumhalf Abrahams was awarded the man-of-the-match award while Geldenhuys commended the performance of flyhalf Giddy who converted all three of his team’s tries.

“We told him (Giddy) afterwards it was a very mature performance, he kept a calm head against a very stern line speed where they put our backs under a lot of pressure and they caught us behind the gain line, especially in the first half a few times,” Geldenhuys said.

“He needed to adapt and I think the way he did it was very mature of him and then from there on to kick into space behind them and to identify that space in the right moment, we really applaud him for that.”

Paarl Boys opened the scoring and closed it as they managed a late converted consolation try after the full-time hooter to make the 21-12 scoreline decorous.

Meanwhile in Cape Town, Paul Roos coming off a spectacular last-minute win against Paarl Gimnasium the week before, saw off a resilient SACS team 20–12 on a wet Saturday morning in Cape Town.

The match was played on the luscious green Percy Montgomery field and, as irony would have it, it was the left boot of Paul Roos’ fullback, Christoff de Bruyn that kicked SACS out of the game.

“There was that little bit of rain before the game, so we knew it was gonna be a bit wet and handling was gonna be tough so we knew if we can just get some territory, they (SACS) are naturally prone to rather have a go than to kick so if we can just play in the right areas of the field, it will give us an opportunity,” Corné Uys, head coach of Paul Roos told Daily Maverick.

SACS led 12-10 at halftime thanks to an incredible try of the season contender by flyhalf Akha Mjawule. SACS had a scrum set up just inside their own half when the ball was swung to enforcing outside centre Rayaan Hendricks positioned at first receiver, seemingly to crash into Paul Roos’ flyhalf channel to set up the next phase, however, he quickly sidestepped and offloaded to the fleet-footed Mjawule who accelerated between the red machines centre pairing.

Mjawule still had a lot of work to do after breaking the line at the halfway line, despite leaving the centres grasping at air. He then danced his way around De Bruyn and winger Christiaan Brandt to dot down under the poles to raptures from both the SACS supporters as well as the Paul Roos supporters who appreciated the excellent individual moment of brilliance from the diminutive playmaker.

“It was tough. You have to give a lot of respect to the SACS guys. They showed immense character. [They’re] obviously a proud, traditional rugby school. We’re just happy to do this again, to come here and to experience it but lots of credit must go to them, they played really well,” said Uys.

Star outside centre Jurenzo Julius was missing for Paul Roos, among other injuries currently plaguing the Winelands team.

“It was a tough game at SACS, we knew it was gonna be tough. We came off a good win against [Paarl] Gim with a few injuries but the boys stuck together and we gave it our all and we got home with the win,” said Herman Lourens, captain of Paul Roos to Daily Maverick.

“We’ve got a very good squad so the person that comes in is almost just as good as the person that starts. So it doesn’t affect us that much, we are strong, with or without injuries,” said Lourens.

Paul Roos scored an excellent try of their own in the first half as Brandt received the ball in some space on the left wing and darted past two defenders, seeing off the second one with a strong right arm fend and diving over in the corner. Geldenhuys was full of praise for his winger.

“He’s got a knack for sneaking through gaps. I’ve heard this saying that a good rugby player has a high work rate, a low error rate and something that sets them apart or something that makes them special and that’s definitely the thing that makes him (Brandt) special — he can wiggle through little gaps. It was a nice try,” said the coach.

Despite the resilience from the SACS forward pack, the siege after siege on their try line in the second half, was ultimately too much as Paul Roos secured a penalty try through a collapsed rolling maul and then a penalty slotted through the sticks by De Bruyn to come away with a 20-12 win. DM