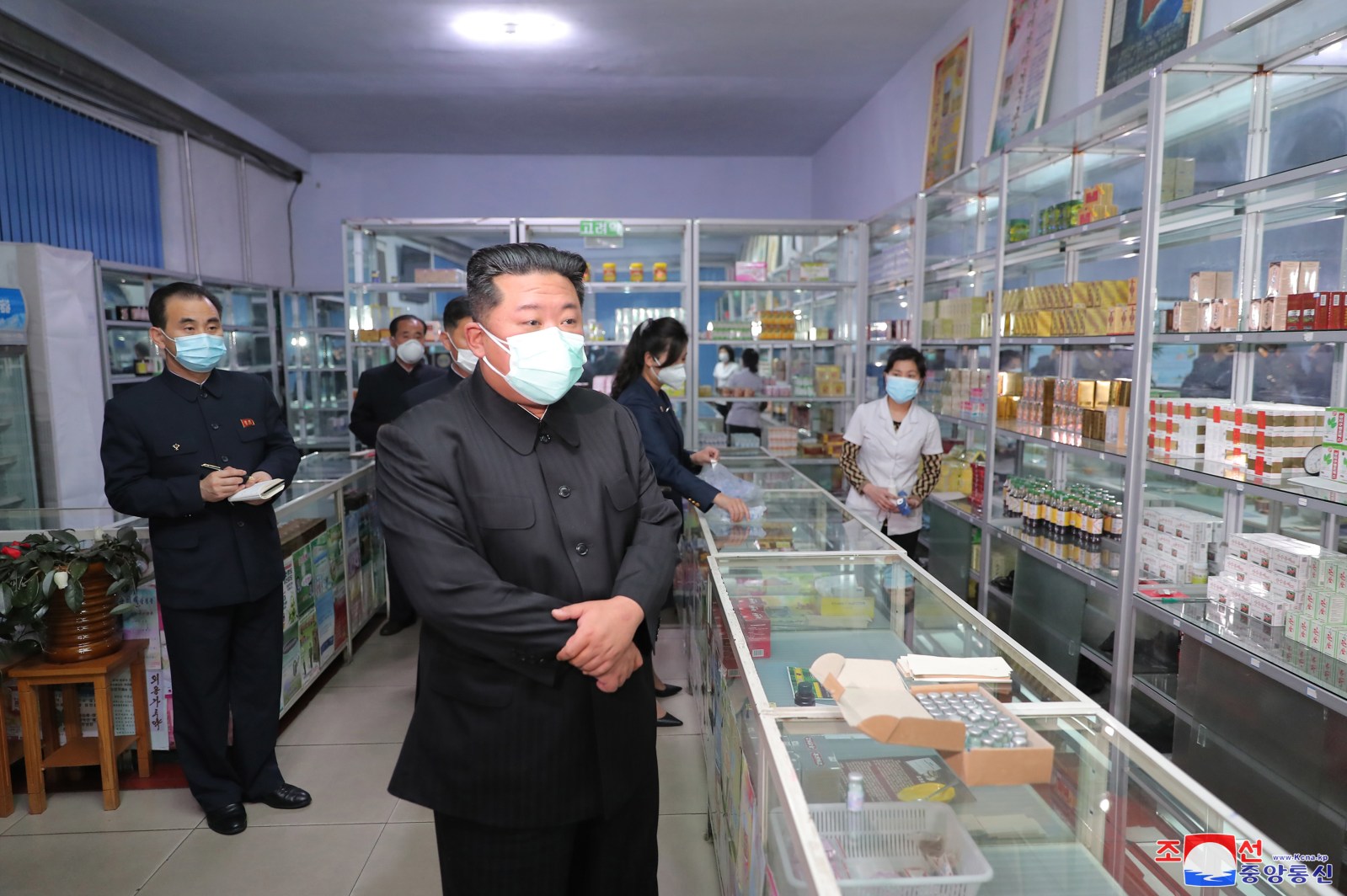 North Korean leader Kim Jong-un (C) wearing a face mask while inspecting a pharmacy in Pyongyang, North Korea, 15 May 2022 (issued 16 May 2022). On 15 May, Kim held an emergency consultative meeting of the political bureau of the Workers' Party at the headquarters of the party's Central Committee in Pyongyang. In the meeting, Kim ordered the mobilization of soldiers to stabilize the supply of medicine in the capital. EPA-EFE/KCNA EDITORIAL USE ONLY

SEOUL, May 16 (Reuters) - Leader Kim Jong Un has ordered North Korea's military to stabilise distribution of Covid-19 medicine in the capital, Pyongyang, in the battle against the country's first confirmed outbreak of the disease, state media said.

Last week brought the North’s first acknowledgment of an “explosive” outbreak, with experts warning it could devastate a country with limited medical supplies and no vaccine programme.

Drugs procured by the state were not reaching people quickly or accurately, Kim told an emergency politburo meeting on Sunday, before visiting pharmacies near the capital’s Taedong River, state news agency KCNA said.

Kim ordered immediate deployment of the “powerful forces” of the army’s medical corps to “stabilise the supply of medicines in Pyongyang City”, it added.

Although authorities had ordered distribution of national reserves of medicine, pharmacies were not well-equipped to perform their functions smoothly, Kim added, the agency said.

Among shortcomings were a lack of adequate drug storage, salespeople unequipped with the proper sanitary clothing and hygiene falling short of standards, Kim said.

He criticised the “irresponsible” work attitude, organisation and execution by the cabinet and the public health sector, it added.

Without a national vaccination campaign and COVID treatment, state media have encouraged patients to use painkillers and antibiotics as well as unverified home remedies, such as gargling salt water, or drinking lonicera japonica tea or willow leaf tea.

Seoul’s unification ministry, responsible for cross-border relations, said it had proposed working-level talks to provide medical supplies, including vaccines, masks and test kits, as well as technical cooperation, but that the North had not acknowledged its message.

The offer came shortly after South Korean President Yoon Suk-yeol said he would spare no effort to help the North fight its outbreak, saying it was ready to provide COVID-19 vaccines and other medical support.

Yoon said he would send humanitarian aid without political considerations, while expressing concerns over the North’s recent missile launches and signs of preparations for what would be its first nuclear test since 2017.

“If North Korea responds, I would not hold back any necessary support for medicines including COVID vaccines, medical equipment and health personnel,” he said in a speech to parliament.

The World Health Organization (WHO) said the virus may spread rapidly in North Korea, citing the lack of vaccination programmes, but it had yet to receive information about the outbreak directly from local authorities.

The body’s 194 members, including North Korea, are obliged to report a public health emergency within 24 hours once a COVID outbreak arises, though there were no penalties for non-compliance.

“With the country yet to initiate COVID-19 vaccination, there is risk that the virus may spread rapidly among the masses unless curtailed with immediate and appropriate measures,” said Poonam Khetrapal Singh, WHO’s regional director for South-East Asia, in a statement.

North Korea’s tally of the fever-stricken stood at 1,213,550, with 50 deaths by Sunday, after KCNA reported 392,920 more cases of fever, and eight more deaths. It did not say how many suspected infections had tested positive for COVID-19.

The North has blamed a large number of the deaths on people who were “careless in taking drugs” because of a lack of knowledge about the Omicron variant of coronavirus and its correct treatment.

By Josh Smith and Joori Roh