PRASA BACK ON RAILS? 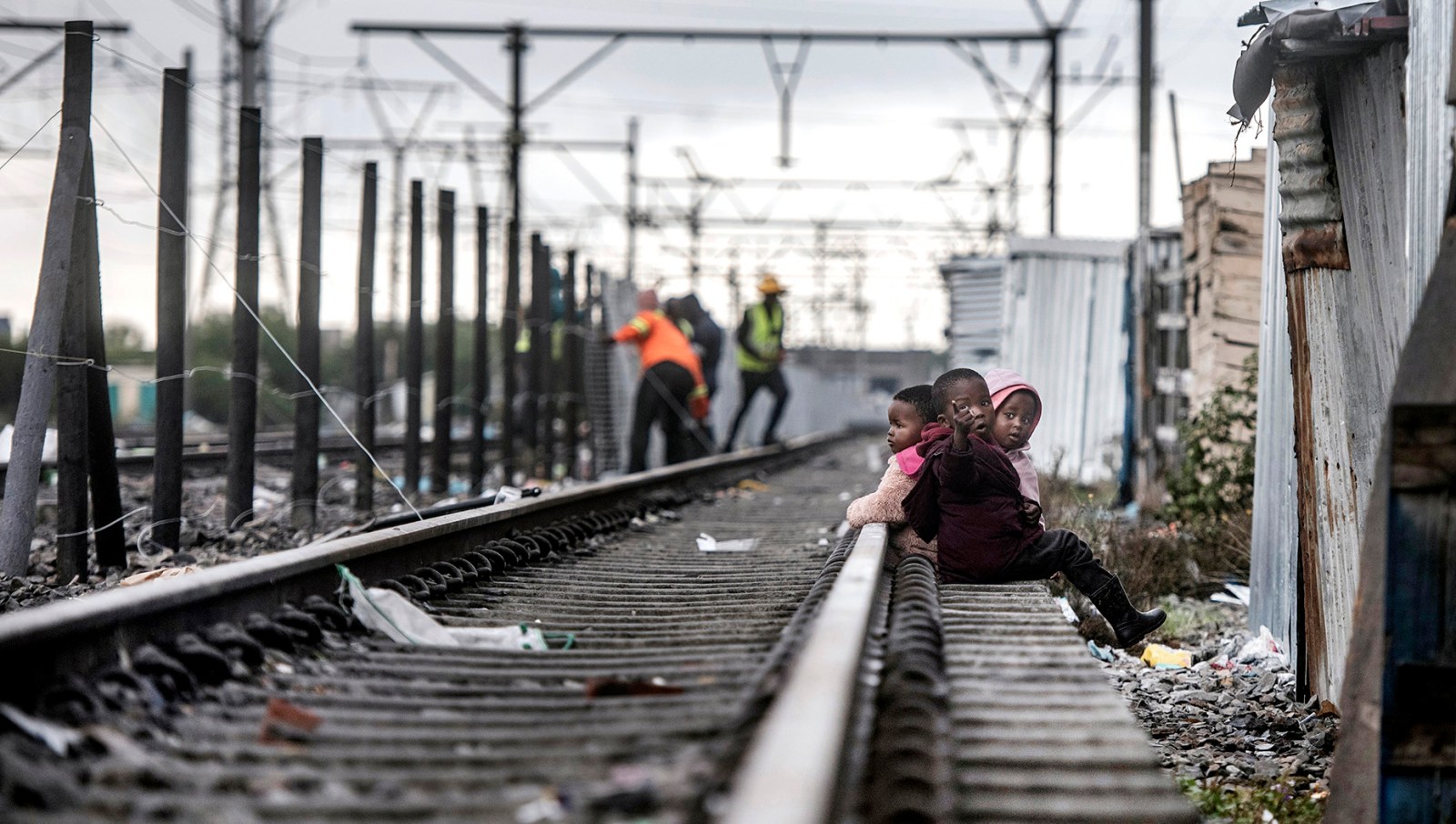 Children watch workers put up temporary fencing on the Central Line near Langa station, Cape Town. Transport Minister Fikile Mbalula has promised families living in shacks on the line that they will be given land for housing. (Photo: Brenton Geach)

The project to restore the Central Line is a ‘massive one’, conceded Transport Minister Fikile Mbalula after a visit to monitor progress on the Metrorail line, which runs through some of Cape Town’s poorest suburbs. Although the minister and Prasa are optimistic about restarting a limited service to Khayelitsha in December, work is being held up by rail encroachment, vandalism and theft.

It’s just after 9am on Friday, 12 May, and Cape Town’s Langa station is quiet except for the occasional hooting of taxis outside. The train station is usually abuzz with commuters, but there are only a few people around — some using the station as a thoroughfare while others wait for Transport Minister Fikile Mbalula to arrive to inspect the repair work to the Central Line.

A few metres outside the station, people go about their business in the informal settlements that have sprung up right next to the train tracks, on property owned by the Passenger Rail Agency of South Africa (Prasa). Music is heard coming from the corrugated shacks.

Langa resident Sindile Nabe walks across the tracks to get to the nearby Epping industrial area. The 54-year-old, who has always lived in Langa, says he is aware of the “occupiers”, but “I don’t know what’s going on here”.

Nabe said he once used the trains to get to areas such as Bellville, but can no longer do so. He said a train trip to Bellville used to cost R13, but a taxi is R20. “The train is cheaper than the taxi, it must come back,” said Nabe.

Since 2016, there have been people occupying the rail tracks at Langa station, a key station on the Central Line. The Central Line runs from the Cape Town station and ends at Bellville station, Chris Hani (in Khayelitsha) and Kapteinsklip (in Mitchells Plain) stations. The routes go through suburbs such as Langa, Phillipi, Nyanga, Bonteheuwel, Bishop Lavis and Belhar, some of Cape Town’s poorest suburbs.

The line was shut down in November 2019 because of sustained theft, vandalism and arson. At the time, Prasa had serious governance issues, with interim boards and acting CEOs appointed often.

In February 2021, Prasa reopened the line to Langa. The Central Line, however, cannot operate beyond this station because of the land occupation encroaching on the tracks. Prasa’s board chair Leonard Ramatlakane announced at the time that it would approach the courts for an eviction order. The courts approved the eviction, but, at Prasa’s request, the eviction order was moved to July 2022.

Although Prasa is managing the eviction process, via relocation efforts, the agency is also trying to repair services on the line. Currently, there are 44 trains on the Central Line daily, running between Cape Town and Langa stations.

After Mbalula arrived at 11am, he and a large entourage of departmental officials, Prasa officials and media — under a heavy police presence — were taken to a section of the rail reserve between Pinelands and Langa station where repair work is being done. The agency is working on overhead cables, perways and securing the railways with regular security patrols.

The Prasa officials told Mbalula that a fence is being erected below Bhunga Avenue, between Bonteheuwel and Langa. This is to separate the community from the rail line to allow trains to run beyond Langa. Fencing — poles connected with wire — could be seen at Bhunga Avenue.

At the Bonteheuwel station, the next station, Mbalula was shown the rail split where the trains go to Nyanga station, Bellville station and in the direction of Khayelitsha.

The network section is where some of the worst vandalism and infrastructure theft have occurred, dating back to 2017. The Prasa land has been left with nothing but some perways, red earth and vegetation. Prasa officials told Mbalula they were busy installing antivandalism clips to prevent the perways from being ripped out and sold as scrap metal.

Mbalula questioned the point of fixing the rail infrastructure without security being implemented. He chastised officials for earning a salary every month when the rail network was not secured, describing it as “negligence”.

Mbalula and the entourage were then taken to Khayelitsha’s Noqubela station, where around 300 people have encroached on the rail network. The area was dirty with bags littering a footbridge, while goats were eating overgrown grass. After a visit of less than five minutes, Mbalula waved goodbye to the nearby children who had been shouting for his attention.

Mbalula then made his way to the Brown’s Farm Community Hall in Phillippi for a meeting with Langa, Philippi and Khayelitsha occupiers as well as community leaders and representatives from the South African National Civic Organisation (Sanco).

The community raised concerns about their relocation and about who was involved with moving people from the rail reserve to a new area.

Loyiso Nkohla, a community leader, asked Mbalula to tell the truth about which government sphere was involved in the relocation process as the process was not clear. “These people also need the service of the trains,” said Nkohla, a controversial figure in Cape Town politics after throwing poo during a protest at the Cape Town International Airport in 2010.

Khayelitsha resident Mxolisi Godongwana told Mbalula to keep engaging with people and to reinstate the People’s Responsibility Programme (PR2P). He said young people who worked in this programme used their stipends to enrol for computer training programmes.

On the sidelines of the meeting, Sanco Western Cape provincial executive member Loysio Doyi told Daily Maverick, “We don’t need empty promises to our people.” He said people had no choice but to live on the tracks, but community members wanted to work with Prasa to move people off the rail tracks.

But the communities wanted “black-and-white promises” from Mbalula and Human Settlements Minister Mmamoloko Kubayi, he said.

Doyi warned that if promises were not kept by Mbalula, people could become upset and potentially damage Prasa infrastructure, something Sanco would not want as “that is taxpayer’s money”. Doyi proposed a solution: that the government “avail budgets” for people who lived in areas such as Nyanga, Philippi and Gugulethu.

“I’ve had sleepless nights talking to the City of Cape Town and the province about this matter,” Mbalula told the meeting. “I know you are concerned that when you leave here and the trains are built you won’t have a place to stay… A place to stay is really an issue… After two weeks, for sure, I’ll be back.”

After the meeting, Mbalula addressed the media, describing the fixing of the Central Line as a massive job: “It’s got its own challenges — and the biggest of them all is the encroachment on the Central Line by people who have built shacks over the rail reserve.”

Mbalula described Khayelitsha and Phillipi as an “Achilles’ heel” because of the land occupations. He stressed that Prasa could not move people from the settlements as that was the job of the Department of Human Settlements, while the City of Cape Town “must address the question of ablution and design, and environmental issues before the people can occupy the land”.

Aside from land occupations, security was a huge problem, the minister said: “As we recover the lines, it is important that they are protected.” Vandalism and stripping of the rail network happened “unabated” because there was no attention being paid to the protection of the line, said Mbalula.

Prasa was looking to open a limited service between Langa, Bonteheuwel and Bellville by July 2022, and another service to Khayelitsha in December 2022. DM

Mbalula and the community spoke in isiXhosa; translation was provided by Daily Maverick reporter Karabo Mafolo.