All rhyme, no reason: A poetry essay before the WEF Dav...

All rhyme, no reason: Bedtime (and wake-up) poems for Davos WEF 2022 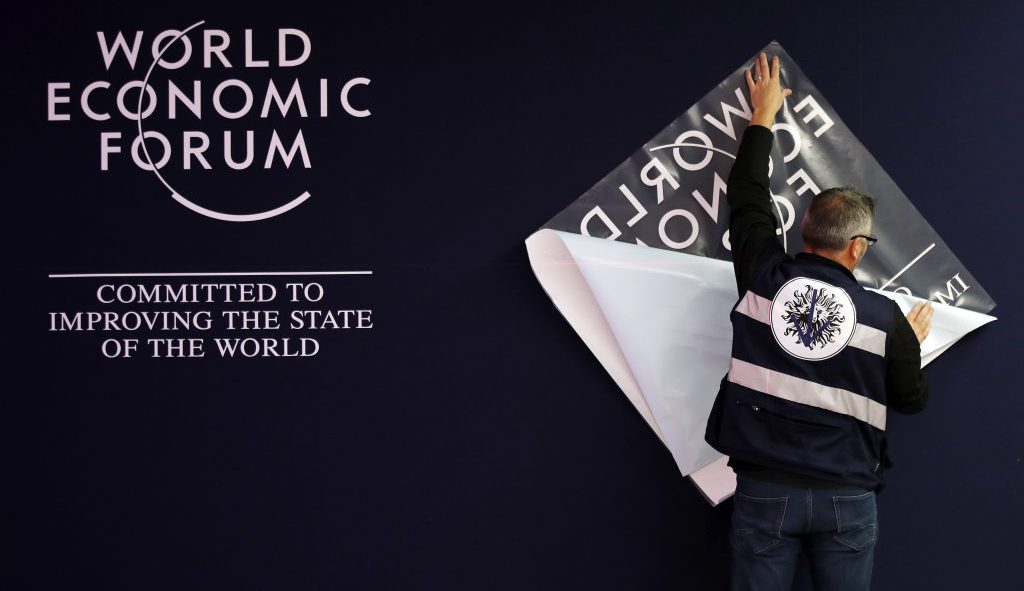 A worker prepares a logo transfer for a wall inside the Congress Centre, the venue for the World Economic Forum, in Davos, Switzerland, on 20 January 2019. (Photo: Stefan Wermuth / Bloomberg via Getty Images)

A poetry essay that gives food for thought on the philosophy of the World Economic Forum (WEF) Annual Meeting.

There once was a prophet, technophile Schwab
All dressed up in revolutionary garb
Does his 4IR hold sway?
That’ll be the friggin’ day
It really does not help les misérables

Our new normal universe a vast digital net?
Post-contact viruses, learnings, now bombings beget
Not quite a state of the art
Though algorithmically smart
Machines are means not ends, I stupidly forget

Covid-19 variants one, three, maybe ten
Supposedly unleash our digital Amen!
Does a virus go digital
As the digital goes viral?
Let’s figure this out so we can get well again

If we’re allowed to say “bullshit” by local norms
Then say it we should of alleged digital storms
That somehow are “brand new”
With roots in past milieu?
Just don’t say it out loud, so everyone conforms

Of last century fusions there’s quite an array
But why do they tell us they’re the tech of today?
When distorted technologies
Repress our psychologies
Technobabbled “revolution” leads us astray

Strong AI, they tell us, is centuries away
The bofs contend it’ll never ever see the day
Instead it’s just weak
It is all technospeak
Only software parading as our future’s doorway

A machine that learns and thinks like you?
Just build in a pattern recognition or two
Trouble is, can it feel?
Intuition, for real?
Mundane stuff is fine, but ‘soft skills’ a can’t do

Apparently clever, hard-working machines
Outnumber us humans in workplace scenes
But fear not dear folk
These robots ain’t woke
They haven’t a clue beyond their routines

The robots are not coming, come what may
Most of them can’t think in a human way
Even those not dense
Have no common sense
A software that’s ‘smart’ is purely hearsay

When Siri or Googlé or Cortana doth quote
We sense that our intellect becomes quite remote
Sure they all repeat lots of stuff
With the right accent, well enough
But their thoughts are so dumbly, so multiply rote

These cars drive themselves, only with complex source code
When their programmes foresee each traffic episode
But read a taxi driver?
As a Mzansi insider?
Now you know why they’ll never ever hit the road

How cool is this internet of things, how ratchet
A computer brain that links every known gadget
But it’s not magic
For no device tragic
All that it does is give us a way to attach it

There once was an alarm clock with digital cred
It massaged and showered and dressed up and fed
Its master so proud
He praised it aloud
“My dear internet of things, my new daily bread”

“Cybersystem” wows the hell out of me
The technolingo so this century
Reality check!
It’s not so hi-tech
Just a big word for connectivity

Can a chain of these blocks unblock our chains?
Or just obsess us with financial gains
Cryptocurrency rules
For rich digital fools
“Money” upon money as human good wanes

A child’s song recalled, a deadly plague and its remnants
[Ring a ring of rowses, BIG DATA fuelled surveillance
Chrasha! chrasha!
May it all fall down]
Or else must we tolerate these digital assailants?

The poor once knew what I.T. was about
Half the world was in, half the world was out
Along comes this technofusion
Promising wealth and inclusion
But soon there’s less jobs as the lies start to sprout

Africa divvied up, fifteen decades ago
White men drawing their maps so their profits would grow
Now the Davos henchmen
Make it happen again
Digital trade overlaid on poverty they sow

African sweatshops, unhealthy and rough
Sewing the coolest and “biggest” brand stuff
Afrocelebs pay 2k per shoe
30 a month, the workers accrue
You’d think they might shout out, this is enough!

“Just under” 60 percent of the downtrodden South
Must live on their wits, empty hand to empty mouth
How on this earth can they say
This is technology’s day
If their thinking machines cannot think this away

Not a Priest nor an Imam, not even a Shinshoku
Nor any Pastor, Sangoma, Rabbi, Lama, Guru
But a top 4IR seer
Convincing us to inhere
This web of technologically rational juju

Then these economists peddling their “science”
Glibly discoursing techno-compliance
What do their stats show?
That business is slow?
Or what’s called for is grassroots defiance?

There are so many varsities jumping online
Is it about teaching or toeing the tech line?
Wikify as never before
Dumb knowledge down as skills galore
Don’t try to teach or to think, just do your job fine