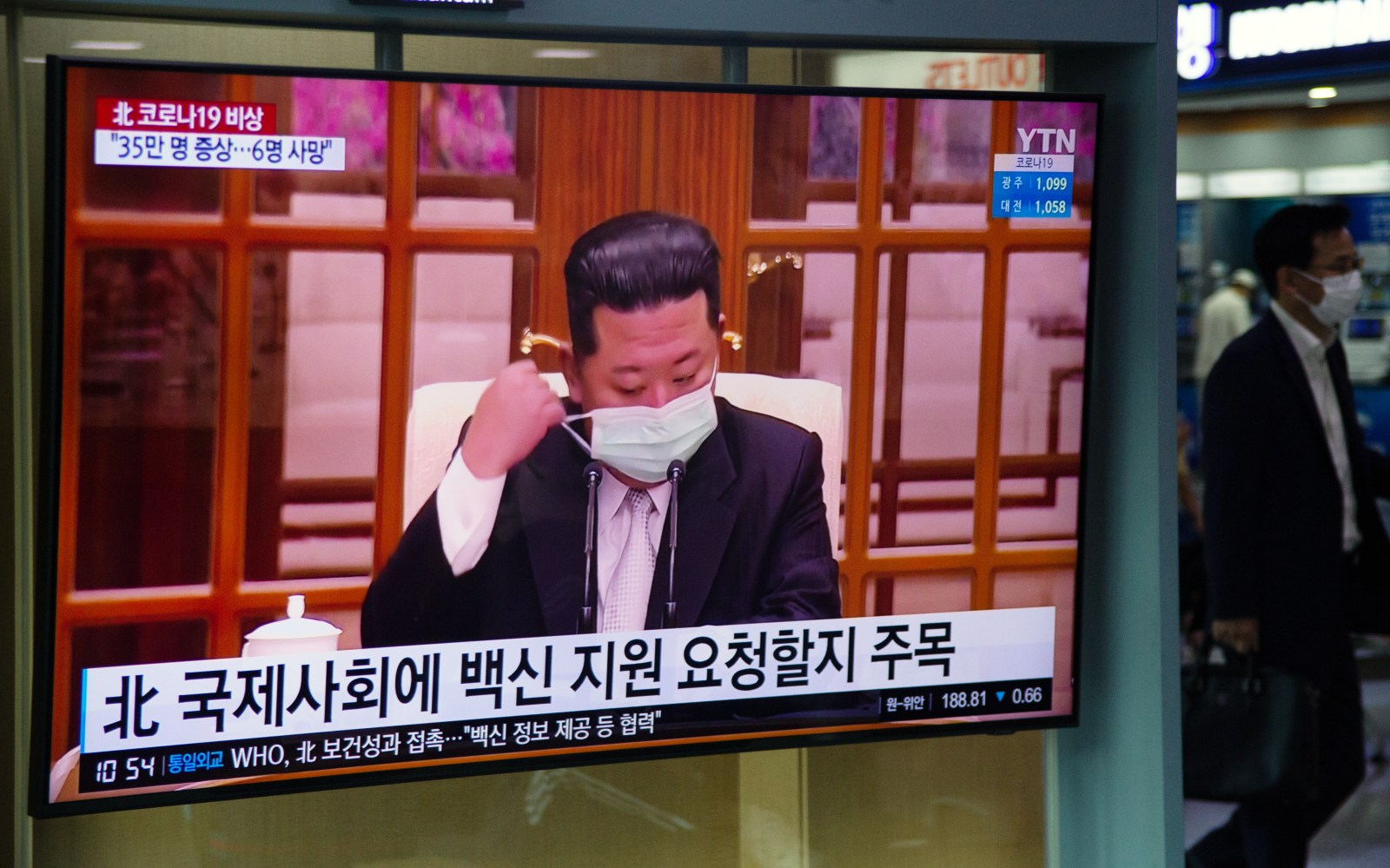 A man watches a news broadcast about the COVID-19 outbreak in North Korea, at a station in Seoul, South Korea, 13 May 2022. The North Korean state media agency (KCNA) announced an outbreak of COVID-19 in the country. A nation-wide lockdown was instituted in response and On 13 May, the first COVID-19 related deaths were reported. EPA-EFE/JEON HEON-KYUN

SEOUL, May 13 (Reuters) - At least one person confirmed to have Covid-19 has died in North Korea and hundreds of thousands have shown fever symptoms, state media said on Friday, offering hints at the potentially dire scale of country's first confirmed outbreak of the pandemic.

The data represents an unprecedented admission of an “explosive” outbreak in a country that had reported no previous confirmed cases since the pandemic began, and could mark a grave public health, economic and political crisis for the isolated regime.

South Korea’s new president, Yoon Suk-yeol, who took office this week, plans to provide Covid-19 vaccines and other medical support to North Koreans, and his government would discuss details with Pyongyang, his spokeswoman said on Friday, without elaborating.

Experts said that given North Korea’s limited testing capabilities, the numbers released so far probably represent a small fraction of the infections, which could lead to thousands of deaths in one of only two countries in the world without a Covid-19 vaccination campaign.

About 187,800 people are being treated in isolation after a fever of unidentified origin has “explosively spread nationwide” since late April, the official KCNA news agency reported.

Roughly 350,000 people have shown signs of that fever, including 18,000 who newly reported such symptoms on Thursday, KCNA said. About 162,200 have been treated, but it did not specify how many had tested positive for Covid-19.

At least six people with fever symptoms have died, with one of those cases confirmed to have contracted the Omicron variant of the virus, KCNA said.

Harvard Medical School’s Kee Park, who has worked on health care projects in North Korea, said the country has been testing about 1,400 people each week, which is not nearly enough to survey 350,000 people with symptoms.

“What is more worrisome is the sheer number of symptomatic people,” he added. “Using a conservative case fatality rate of 1% and assuming the surge is due to an Omicron variant of Covid-19, North Korea can expect 3,500 deaths from this outbreak.”

North Korean leader Kim Jong Un visited the anti-virus command centre on Thursday to check the situation and responses after declaring a “gravest state of emergency” and ordering a national lockdown, KCNA said.

State media has said the outbreak began in the capital, Pyongyang, in late April, without elaborating on potential causes. The city hosted several massive public events on April 15 and 25, including a military parade and large gatherings where most people did not wear masks.

Kim, who attended some of those events, “criticised that the simultaneous spread of fever with the capital area as a centre shows that there is a vulnerable point in the epidemic prevention system we have already established,” KCNA said.

Kim said isolating and treating people with fevers is a top priority, while calling for scientific treatment methods and tactics, and measures to supply medication.

In another dispatch, KCNA said health authorities were trying to organise testing and treatment systems and bolster disinfection work.

The rapid spread of the virus highlights the potential for a major crisis in a country that lacks medical resources and has refused international help with vaccinations while keeping its borders shut.

Analysts said the outbreak could worsen the country’s already tough food situation this year, with the lockdown hampering its “all-out fight” against drought and the mobilisation of labour.

North Korea said last year it had developed its own polymerase chain reaction (PCR) equipment for Covid-19 tests. But it declined vaccine supplies from the COVAX global sharing programme and China, possibly leaving the vast majority of people in a relatively young society at higher risk of infection.

North Korea has so far not publicised any new calls for help in countering the outbreak, but some observers were optimistic that the disclosure was a signal that the government would soon accept vaccines or other aid.

Yoon’s pledge for support came a day after Kwon Young-se, his nominee to be the unification minister, said at his confirmation hearing that he would push for humanitarian assistance for the North, including Covid-19 treatment, syringes and other medical supplies.

A unification ministry spokesman said on Friday that about 95.4 billion won ($74.1 million) from an inter-Korean cooperation fund was earmarked to facilitate exchanges in the health and medical area.

A U.S. State Department spokesperson said it had no plans to send vaccines to North Korea but supported international efforts to provide aid to vulnerable people there, urging Pyongyang to facilitate that work.

By Hyonhee Shin and Josh Smith