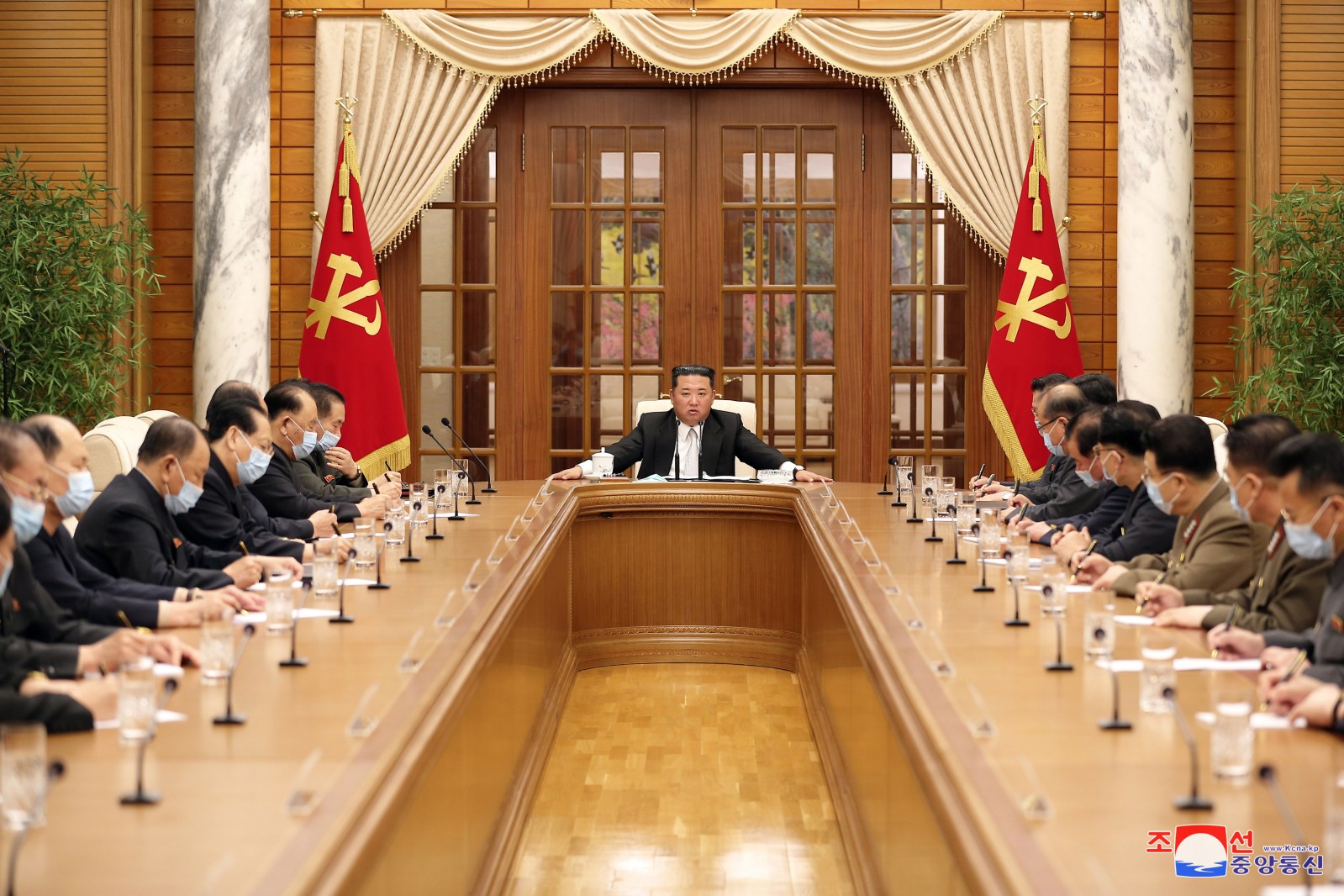 The meeting of the 8th Political Bureau of 8th Central Committee of the WPK, convened at the office building of the Party Central Committee in Pyongyang, North Korea, 12 May 2022. Kim Jong-un (C), general secretary of the Workers' Party of Korea (WPK), presented at the meeting, held to organize the government's response to an outbreak of Covid-19 in Pyongyang. EPA-EFE/KCNA.

SEOUL, May 12 (Reuters) - North Korea reported its first Covid-19 outbreak on Thursday, calling it the "gravest national emergency" and ordering a national lockdown, with state media saying an Omicron variant had been detected in the capital, Pyongyang.

North Korea had never confirmed a Covid-19 infection before Thursday although South Korean and U.S. officials have said there could have been earlier cases in the isolated country, given its trade and travel with China before it sealed its border to block the virus in early 2020.

“The state’s most serious emergency has occurred: A break emerged in our emergency epidemic prevention front that had been firmly defended until now,” the official KCNA news agency said.

The first public admission of Covid-19 infections highlights the potential for a major crisis in a country that lacks medical resources and has refused international help with vaccinations and kept its borders shut.

As of March, not only had no cases of Covid-19 been reported, according to the World Health Organization (WHO), but there was no official record of any North Koreans being vaccinated.

KCNA said that samples taken on May 8 from people in Pyongyang who were experiencing fevers showed a sub-variant of the Omicron virus, also known as BA.2. It did not give the number of cases or say what the source might have been.

State television showed Kim wearing a mask upon arrival for the meeting, before taking it off as it began. All other attendees wore masks.

In past footage of such meetings, everyone but him wore a mask. There was no sign of masks in pictures of a recent big military parade.

For more than two years Kim has enforced tight restrictions to stop Covid-19 including a ban on travel between provinces. In July 2020, he declared an emergency and imposed a three-week lockdown on Kaesong town, near the inter-Korean border, after a man who defected to the South in 2017 returned to the city showing COVID symptoms.

According to the latest WHO data, as of the end of March, 64,207 of North Korea’s 25 million people had been tested for Covid-19 and all were negative.

North Korea had declined vaccine supplies from the COVAX sharing programme and the Sinovac Biotech vaccine from China, possibly leaving the vast majority of people in a relatively young country exposed to higher risk of infection.

The office of South Korea’s new president, Yoon Suk-yeol, who was sworn in on Tuesday, said it would not link humanitarian aid to political differences with North Korea.

Kwon Young-se, Yoon’s nominee for unification minister responsible for inter-Korean ties, told his confirmation hearing that he would prepare humanitarian assistance for the North, including Covid-19 treatment, syringes and other medical supplies.

The border with China was reopened for trade early this year but China had said the main crossing between its Dandong city and the North Korean town of Sinuiju was closed in April because of the Covid-19 situation on the Chinese side.

News of the outbreak came after U.S. and South Korean officials warned North Korea could conduct its first nuclear test since 2017 as early as this month, after breaking a 2017 moratorium on long-range missile testing.

Kim told the politburo emergency measures were aimed at curbing the virus and eliminating the source of transmission. The politburo criticised the “slackness, irresponsibility and incompetence” of anti-virus officials, KCNA said.

A failure to contain infections could be an “unprecedented crisis” for Kim, said Lim Eul-chul, a professor of North Korean studies at Kyungnam University in South Korea.

“Given a more inferior vaccination situation and testing capacity and public health infrastructure compared to China, plus the lack of intensive care units, there’s potential for scores of casualties,” he said.

By Joori Roh and Soo-hyang Choi