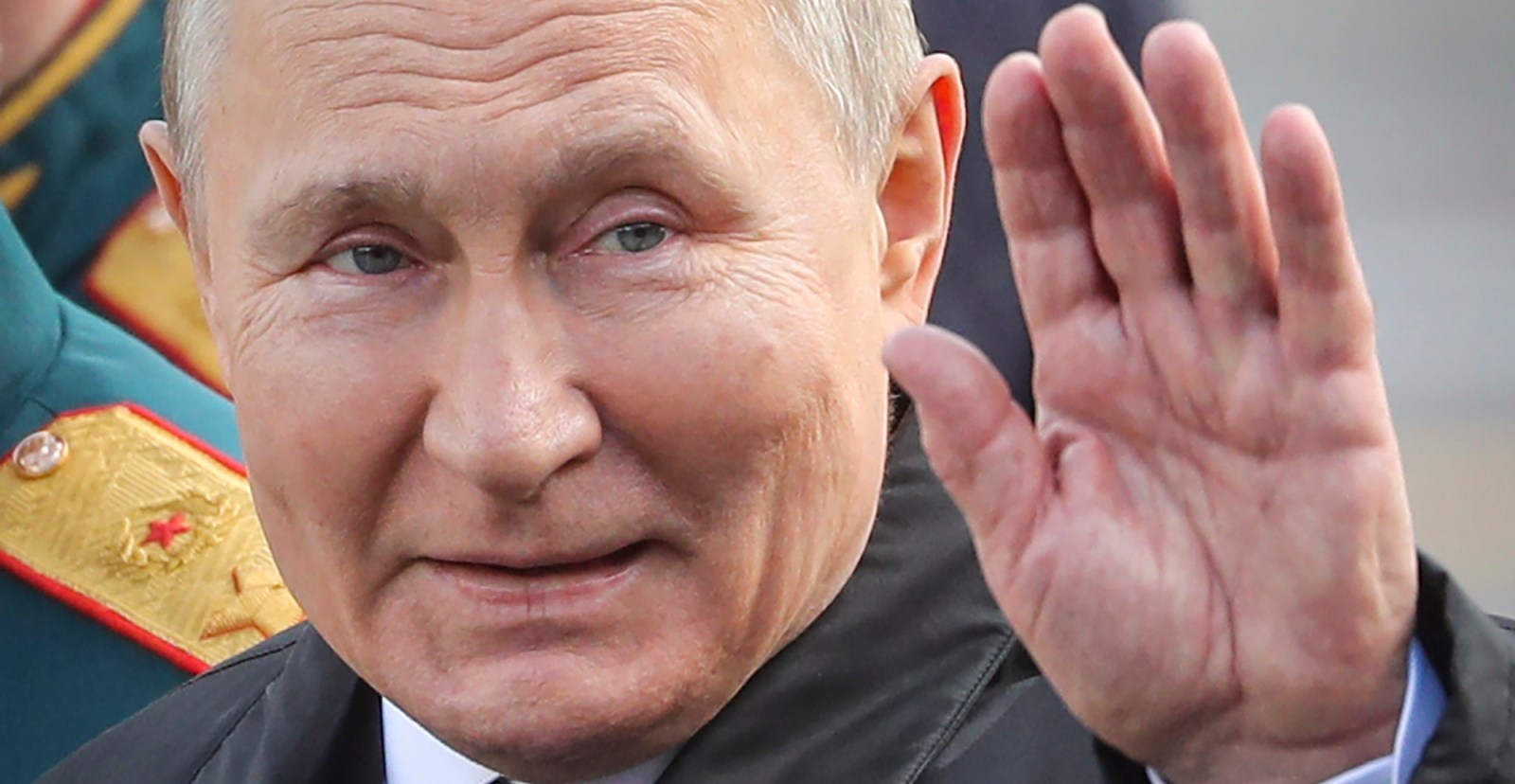 Russian President Vladimir Putin waves as he attends the Victory Day military parade on the Red Square in Moscow, Russia, 09 May 2022. Russia marks Victory Day, Nazi Germany's unconditional surrender in World War II, with the annual parade in Moscow's Red Square on 09 May, after more than two months of attacks on Ukraine. EPA-EFE/MAXIM SHIPENKOV

Russia’s deputy foreign minister held a meeting with the US ambassador in Moscow. The talks followed a report that Kremlin-installed authorities in Ukraine’s Kherson region plan to ask to become part of Russia, a sign that the occupied territory may be annexed.

Kyiv and Moscow clashed over natural gas supplies sent via pipelines to Europe, while Russia’s economy showed more signs of strain with a collapse in car sales. The UN labour agency said that almost 4.8 million jobs had been lost in Ukraine since Russia’s invasion.

On the battlefield, Ukraine deployed US-supplied howitzers to the front but warned of hard times to come as it waits for more weapons.

With payments looming later this month, companies have been trying for weeks to figure out how they can meet Russia’s demand for rouble payments – and keep crucial gas flowing – without violating the sanctions. Draghi said as of now there is no official pronouncement on what constitutes a breach of sanctions, and whether rouble payments would qualify.

Draghi said he also discussed with US President Joe Biden, whom he met on Tuesday at the White House, the possibility of creating an oil buyers’ cartel to check the power of Opec.

Russia introduced blocking sanctions on the owners of the Yamal-Europe pipeline, the entire Gazprom Germania group, and several other European and UK companies, according to a government decree.

US Defense Secretary Austin said he doubts Russia will widen its war, such as by attacking missile sites in Poland, because Putin doesn’t want to take on the Nato alliance. “This is a fight that he really doesn’t want to have,” Austin said.

It would “quickly escalate into another type of confrontation that no one wants to see”, Austin said in testimony to the House Appropriations defence panel.

Austin also said he has emphasised to Ukraine’s leaders the importance of keeping track of US weapons sent to the country so they don’t go astray. “Accountability is an important issue to all of us,” he said.

Russian forces have closed the valve at one of two key border points where natural gas destined for Europe enters Ukraine, Yuriy Vitrenko, chief executive officer of state-run Naftogaz, said in an interview on Bloomberg Television. That prompted Ukraine’s gas grid to stop shipments through that route this morning.

President Volodymyr Zelensky filed a draft law to Ukraine’s Parliament on Wednesday providing for the confiscation of Russian-linked assets no later than six months after martial law expires. Under the terms of the draft, Ukraine would be able to seize Russian assets and those of its citizens on Ukrainian territory, assuming Parliament votes it into the law.

Russia hosts meeting with US ambassador

Russian Deputy Foreign Minister Sergei Ryabkov discussed “a number of bilateral issues” with US Ambassador to Russia John Sullivan during a meeting in Moscow, the Foreign Ministry said in a statement on its website.

The ministry readout is similar to one published on April 24, two days before Russia and the US conducted a surprise prisoner swap in Turkey.

European Investment Bank can free up funds for Ukraine ‘in days’

As for Ukraine’s longer-term needs, Hoyer said there is no other option than issuing new debt as the sums for reconstruction will be astronomical.

“We want to bring back peace… and we want to restore our territory,” the Ukrainian president said in an address to Science Po students in Paris. The Ukrainian side is ready to carry on negotiations, he said, but “with each new atrocity, the desire and possibility to negotiate regresses, along with the possibility to resolve this diplomatically”.

Ukraine deploys US howitzers to the front

Ukraine is already using US 155mm howitzers at the front, but more time is needed for Western weapons to arrive, Deputy Defence Minister Hanna Malyar said during a video briefing. “

We are in for some very difficult weeks, maybe months,” Malyar said of the military situation.

UK Prime Minister Boris Johnson signed “mutual security assurances” with Sweden and Finland. The UK is committing to support the two nations’ armed forces if they come under attack, and it will also step up intelligence sharing as part of the agreements.

Norway, Denmark and Iceland are separately working on a common political declaration with Sweden and Finland to support them as they weigh Nato applications, Norway’s VG newspaper reported. The declaration may include military support for the period between the time of application and eventual membership when full security guarantees would come into force, it said.

Digital ministers from the Group of Seven nations meeting in Germany published a joint statement denouncing “Russia’s malicious cyber activities, information manipulation, interference, and online disinformation campaigns”, which they said they would “continue to address”.

“We affirm the right of people in Russia to access unbiased and factual information and we commit to defending freedom of expression online,” the ministers said. “We are resolved to counter the use of the digital sphere as a battleground.”

Russian car sales plunged the most on record in April as sanctions undermined domestic production and most foreign carmakers suspended operations in the wake of the invasion of Ukraine. Sales fell by 79% to 32,706 vehicles compared to a year earlier, according to the Association of European Businesses in Moscow.

Car production is heavily dependent on imports, with a recent report by Moscow’s Higher School of Economics estimating that more than half of the value added in the sector comes from abroad.

The Moscow-installed occupation authorities in the Kherson region of southern Ukraine plan to formally appeal to President Vladimir Putin to become part of Russia, Tass reported. It’s the first public sign the Kremlin may move to annex territory taken in its invasion.

The region wouldn’t hold a referendum on joining Russia, as Crimea did in 2014, but would appeal directly to Putin to be annexed, Tass quoted Kirill Stremousov, the deputy chief of the administration, as saying. Annexation may not take place until the end of the year, he said.

Talks over the past few days with European Commission President Ursula von der Leyen and Foreign Minister Peter Szijjarto said Brussels has no plan to deal with the impact that an embargo on Russian oil would have on the Hungarian economy. The best way forward is for European Union sanctions to only target Russian crude imports via tankers, he said.

The bloc is set to propose a limited investment in the infrastructure of member states most dependent on pipeline oil from Russia to ensure the security of their supplies, according to people familiar with the matter.

Hungary has been blocking EU plans to ban Russian oil imports by the year’s end, arguing it needs more time and money to ensure a sustainable transition and has been seeking technical and investment assurances.

The EU hasn’t decided on the size of the proposed investment, which will be included in the bloc’s “RePowerEU” package – its $205-billion blueprint to wean the continent off Russian energy supplies by 2027. DM