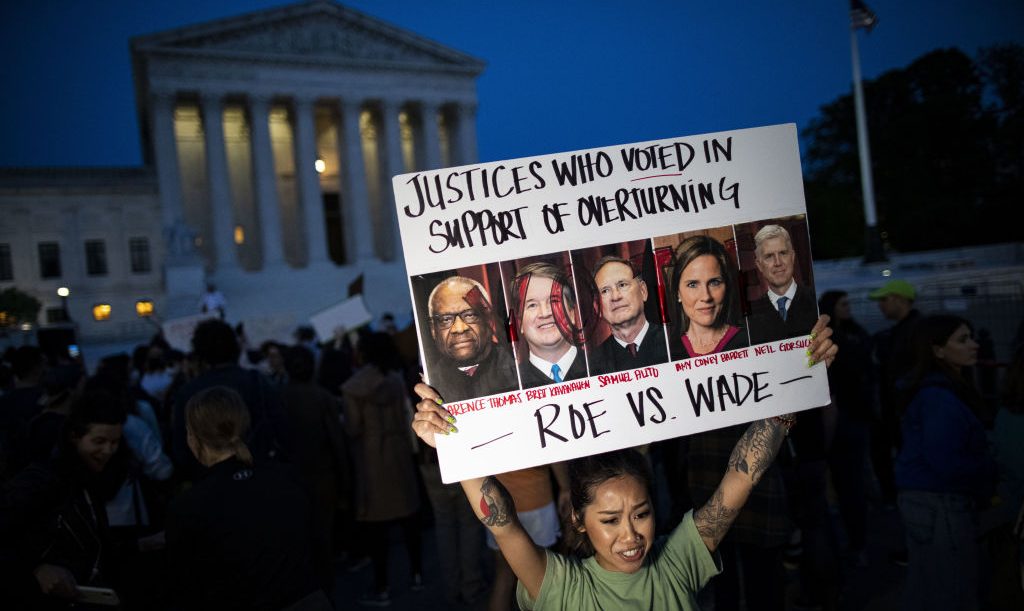 Abortion rights demonstrators outside the US Supreme Court in Washington, DC, US, on 3 May 2022. (Photo: Al Drago / Bloomberg via Getty Images)

America’s most vulnerable women, including those who are poor or black, will be hit hardest if the Supreme Court overturns the right to abortion.

A leaked draft opinion suggests the US Supreme Court is likely to overturn the landmark Roe v Wade judgment, paving the way for an estimated 26 states to impose abortion bans. Women who are young, poor, black, Latina or undocumented migrants will suffer the most from the bans.

The 1973 Roe decision found women had a constitutional right to have an abortion up to the point of foetal viability, at about 24 weeks, which couldn’t be limited by state legislators.

The draft Supreme Court opinion, written by Justice Samuel Alito and leaked to Politico, says that power should return to each state.

“The inescapable conclusion is that a right to abortion is not deeply rooted in the Nation’s history and traditions,” wrote Alito. He said the reasoning in Roe was “exceptionally weak” and “egregiously wrong”. He continued, “The Constitution does not prohibit the citizens of each State from regulating or prohibiting abortion.”

Even without his vote, it’s almost certain the court will either scrap Roe or significantly gut its protections.

Many Republican-led states have introduced measures aimed at restricting access to abortion in recent years, despite the existence of Roe, and they’re poised to act on Dobbs v Jackson Women’s Health Organization, the case the Supreme Court is currently considering regarding Mississippi’s attempt to ban abortion at 15 weeks.

In a statement, Julie Rikelman from the Center for Reproductive Rights, which represents the Jackson Women’s Health Organization in the case before the Supreme Court, said: “For a state to take control of a woman’s body and demand that she go through pregnancy and childbirth, with all the physical risks and life-altering consequences that brings, is a fundamental deprivation of her liberty.”

Dr Herminia Palacio, CEO of the Guttmacher Institute, a reproductive rights advocacy group, said: “This news is not surprising, but shocking nevertheless – in its sweeping reach, its complete disregard for the rights, bodily autonomy and dignity of millions of people, and the chaos and uncertainty it will unleash on those seeking an abortion in many parts of the country.”

According to the Guttmacher Institute, 26 states, mostly in the South and Midwest, are certain or likely to impose abortion bans if Roe is overturned. They include near-total bans and bans on abortion after six weeks, eight weeks and 15 weeks. Many do not provide exemptions for cases of rape or incest.

“Even with Roe in place, affordable and accessible abortion care is a right that exists only on paper for many people who are marginalised and oppressed by structural inequities, including people with low incomes, black and brown communities and other people of colour, and young people,” said Palacio.

Women are already moving between states to access healthcare services. According to Planned Parenthood, health clinics in Oklahoma saw a 2,500% increase in patients from Texas after the Supreme Court effectively allowed Texas to ban abortions at six weeks, earlier this year. A similar ban in Oklahoma was upheld by a state court this week.

The Center for Reproductive Rights told the Supreme Court that many women will not have the means to travel across multiple state lines for an abortion once widespread bans are imposed, meaning they’ll probably try to end their pregnancies outside the medical system, which brings health and legal risks, or will endure the challenges of pregnancy and childbirth despite their wishes.

In an amicus curiae submission to the court, more than 100 social science experts unpacked peer-reviewed studies on the physical, economic and psychological effects of limiting access to abortions. They said the most common reasons for ending a pregnancy include economic security, plans to complete an education, responsibilities to current children and other family members, and the late recognition of pregnancy.

Despite clear evidence that minorities suffer most from limiting abortion access, in his draft opinion Alito noted that some historical supporters of abortion were motivated by “a desire to suppress the size of the African-American population” – a clear reference to eugenics. “It is beyond dispute that Roe has had that demographic effect.

A highly disproportionate percentage of aborted foetuses are black,” wrote the justice.

In a statement responding to the draft ruling, Barack and Michelle Obama urged despondent citizens “to think about the college student waking up after her date forced her into unprotected sex. Think about the couple who tried to have children for years, who are without any options when faced with the tragic reality of an unviable pregnancy. Think of any of the hundreds of thousands of women each year who deserve the dignity and freedom of making a decision that is right for their bodies and their circumstances.”

Such testimonies were submitted to the Supreme Court. Women who had abortions after being raped, who wanted to escape abusive relationships, wanted to continue their educations and escape poverty, and who wanted to avoid the consequences of teenage pregnancies, told their stories.

If Alito’s draft becomes the final judgment, expected to be handed down in June, Republicans could face a backlash in the November midterm elections. Polls have consistently shown that the majority of Americans do not want Roe to be overturned.

If the pending Supreme Court decision galvanises voters against Republicans, or at least distracts them from President Joe Biden’s struggles, Democrats could finally win the majority they need to pass a raft of policy commitments and perhaps finally pass legislation establishing the right to abortion. Such hopes, however, appear distant in the face of an imminent reversal of the right to abortion. DM168