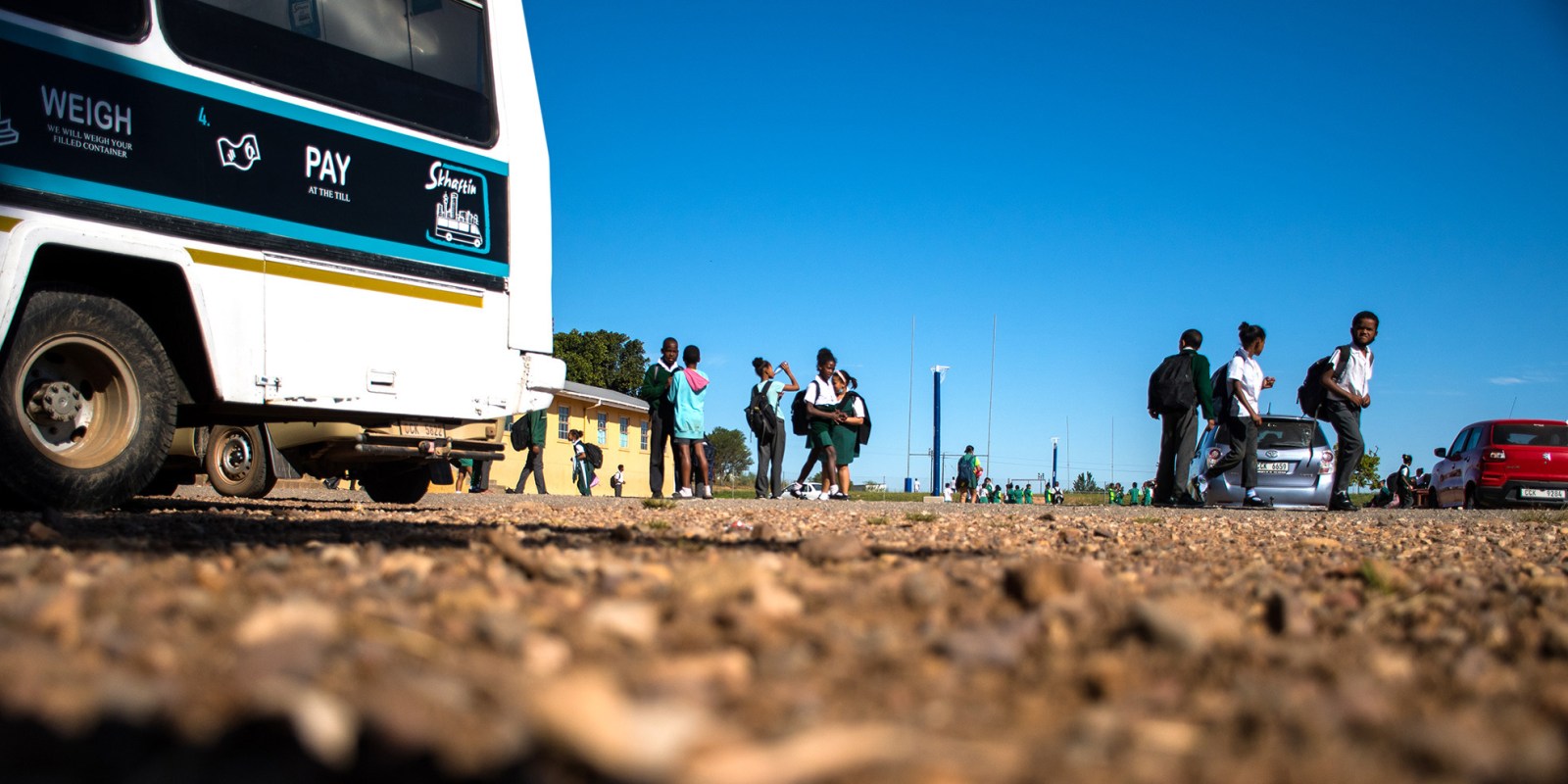 The Skhaftin Bus is a mobile grocery store that aims to provide low-cost food and promote plastic-free shopping. On the fifth day of its trip through South Africa, the bus stopped at the Bontebok Primary School in Swellendam, Western Cape and met with the solid waste and environmental manager at the Swellendam municipality.

“This is where it starts – these kids,” says Johan van Niekerk, the manager of solid waste and environment for the Swellendam municipality, while sitting in the spectator stands at Bontebok Primary School.

Van Niekerk was visiting the school to meet the Skhaftin Bus – a mobile, plastics-free grocery store – that had stopped there on route from Johannesburg to Cape Town, aiming to spread awareness about sustainable shopping among communities along the way.

“We hope to change kids’ minds that waste is money, waste is a resource – and in a generation or two, we’ve solved the problem.”

Van Niekerk is in charge of the Swellendam municipality’s five dumpsites, and enables recycling, waste minimisation and composting from a user and end-user perspective.

He believes  that the two main ways we can reduce our environmental impact is by separating our organics and monetising waste.

“Without a doubt the most important thing we need to focus on in terms of looking after our environment is organic waste,” says Van Niekerk.

“Organics make up a majority of any landfill in South Africa. They do the most harm because they create the bad gases and organics are very easy to divert.”

Van Niekerk explains that organics is anything that grows (or once grew) – so includes garden refuse, kitchen scraps, and other food waste.

“It’s the stuff that ferments in a landfill and creates greenhouse gases that [is] killing the environment.

“And that can easily be diverted – it’s compost material waiting to happen, , its biogas or mulch or even biochar. It’s a resource with huge potential.”

Food rotting in a landfill is a lot different from making compost.

“When you make compost, Organic material gets transformed where the bad stuff is converted through biological processes into compost and nullifies the gasses that could have occurred if it was buried and rotted in the dumpsite”.

The municipality contributes to an initiative called Ladles of Love where communities’ food waste is converted into compost, which local farmers use to grow vegetables and then is sold back to communities through the Feed the Soil program.

“You can attack it from many angles,” explains Van Niekerk.

“You can increase everybody’s awareness about why we should be doing this, or you can show tangible benefits by monetizing waste. Monetizing waste is a much faster process, raising awareness can happen in parallel.”

The municipality wants to open a buyback centre, which will allow locals to cash in their recyclables for food tokens.

“People need to realise that clean, dry plastics are money; it’s not waste. You can sell that stuff for money. And if people create businesses around this, there’s money to be made. It doesn’t have to go to the landfill.”

The recycler makes money. But below them is a chain of people making money by collecting and selling to the main recycler, who transports recycling to Cape Town.

Since Van Niekerk started working for the municipality a year ago, Swellendam started recycling after a long absence.

Now, the municipality is working with a private recycling company to do door-to-door pick ups in certain zones. Within a year, they want to cover the entire Swellendam area.

Van Niekerk says about 800 tonnes of water goes to landfills a month, about 30 to 50 tonnes of plastic is taken out, and about the 250 or 300 tonnes of organics are separated.

“You have to figure out the long term sustainable solution; the social impact and the evolution of social dynamics is the long term solution. That’s the most important thing.”

It’s up to individual households to separate general waste and recyclables, but awareness about recycling and the environmental reason for recycling isn’t there yet.

“We are busy with a few campaigns to increase awareness around [recycling]. But it’s not easy,” van Niekerk.

Swellendam’s population of 47,000 is dispersed through a large area.

“The social impacts and the evolution of social dynamics are long term [outcomes]. That’s the important thing.”

It’s up to individual households to separate general waste and recyclables, but awareness about it isn’t there yet.

“We are busy with a few campaigns to increase awareness around [recycling]. But no, it’s not easy,” he says.

Swellendam’s population of 47,000 is dispersed over a large area.

What goes around comes around

Van Niekerk was previously a lecturer at the Cape Peninsula University of Technology, as the programme leader for industrial design.

“I was in charge of the department that designed and made products. So it’s kind of my karma now to move on to taking care of those products that are designed. So I’ve got a couple of 100 products in production. And I’ve seen one or two of my products at the site.”

“I’m now completing my own personal circle…and taking care of the products I have released into the world. I’ve seen one or two of my products at the site.” he said humorously.

Van Niekerk says reducing our reliance on plastics “comes about not through people changing their minds and doing the right thing and more about changing laws and bylaws. It has to come from political push and societal pull to minimise waste to landfill.”  DM/OBP

This story was edited post-publication for clarity.