US abortion bans back before the Supreme Court – but globally more countries are liberalising access than restricting it. 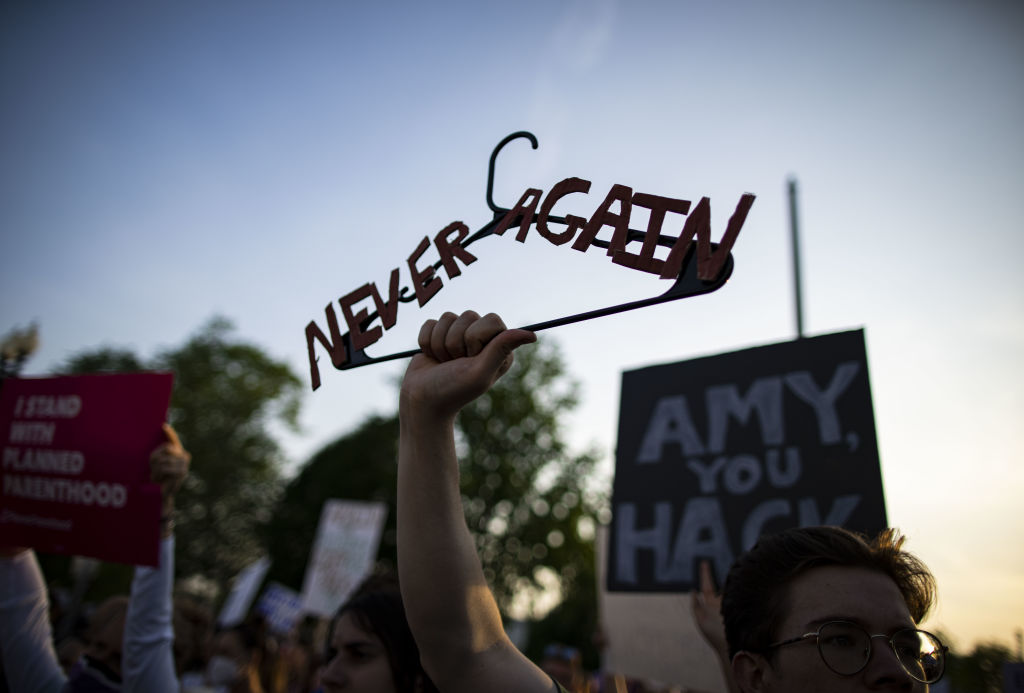 Abortion rights demonstrators during a protest outside the U.S. Supreme Court in Washington, D.C., U.S., on Tuesday, May 3, 2022. Abortion rights suddenly emerged as an issue that could reshape the battle between Democrats and Republicans for control of Congress, following a report that conservatives on the U.S. Supreme Court were poised to strike down the half-century-old Roe v. Wade precedent. Photographer: Al Drago/Bloomberg via Getty Images

In November 2021, justices on the US Supreme Court already considered two challenges to abortion restrictions with wide-reaching implications for access to abortion across the country.

In this episode of The Conversation Weekly podcast, released in November 2021, we looked at what’s at stake, and how else abortion laws are changing around the world.

US Supreme Court justices heard oral arguments on December 1, 2021 in challenge to abortion restrictions in Mississippi. The case, passed by the state’s legislature in 2018, bans most abortion after around 15 weeks of pregnancy. But it’s never been implemented because of ongoing legal challenges, which have now made it to the US Supreme Court. Meanwhile, the court was also considering whether to allow challenges in another case regarding a law in Texas that effectively bans abortion after around six weeks.

At stake was the future of the landmark 1973 Roe v Wade ruling which guaranteed the right to an abortion up until fetal viability, when a fetus can live independently outside the womb. The judgment has long been the target of anti-abortion campaigners who want it overturned.

Amanda Jean Stevenson, an assistant professor of sociology at the University of Colorado Boulder in the US, simulated what would happen if there were to be a total ban on abortion across the US in a new paper. “I found that the number of pregnancy rate related deaths would increase by 21% overall,” she told us. That’s because “when you force people to stay pregnant, then they’re exposed to the mortality risk of staying pregnant that’s way higher than the mortality risk of having an abortion.”

Only a handful of countries have recently introduced new legal restrictions on abortion access in recent years – among them Poland. A near total ban on abortion introduced in late 2020 caused mass protests, which reignited in recent weeks after it emerged a woman died of an infection in hospital after she was refused an abortion.

But compared to the rest of the world, the US and Poland are among the outliers. “Globally, we’re seeing a general move towards more progressive abortion laws,” said Sydney Calkin, a senior lecturer in geography at Queen Mary University of London in the UK. Ireland overturned its abortion ban in a referendum in 2018. In west Africa, Benin’s parliament voted in October to legalise abortion up to 12 weeks.

Even in regions with a history of severely restrictive abortion laws, such as Latin America, the trend is going in the other diretion: liberalisation. In September, Mexico’s supreme court ruled that punishment of abortion was unconstitutional. This followed Argentina’s move to legalise abortion up until 14 weeks of pregnancy in December 2020. There are ongoing challenges to abortion restrictions in Chile and Columbia too.

Jane Marcus Delgado, professor of political science at the College of Staten Island, part of City University of New York in the US, told us that “while it depends on the way the wind is blowing”, Latin America is definitely seeing “concrete signs of progress” on abortion rights.

However, Delgado, who researches the politics of abortion in Latin America, warned, “Every time something is liberalised, just a little bit, there’s a backlash.” She pointed to the rise of anti-choice, conservative movements both at grassroots level and within government across the region, mostly notably Brazil.

Also in this episode, we speak to Patrick Randolph-Quinney, associate professor of forensic science, at Northumbria University, Newcastle in the UK. He was part of a team of scientists at the University of Witwatersrand in South Africa, who discovered what being struck by lightning does to human bones – which has been a mystery up until now. Randolph-Quinney explains how they figured it out.

To end this episode, Wale Fatade, commissioning editor at The Conversation in Nigeria, gives us some recommended reading. DM/ML

This episode of The Conversation Weekly was produced by Mend Mariwany and Gemma Ware, with sound design by Eloise Stevens. Our theme music is by Neeta Sarl. You can find us on Twitter @TC_Audio, on Instagram at theconversationdotcom or via email. You can also sign up to The Conversation’s free daily email here.

This story was first published in The Conversation on 25 November 2021.

You can listen to The Conversation Weekly via any of the apps listed above, download it directly via our RSS feed, or find out how else to listen here.