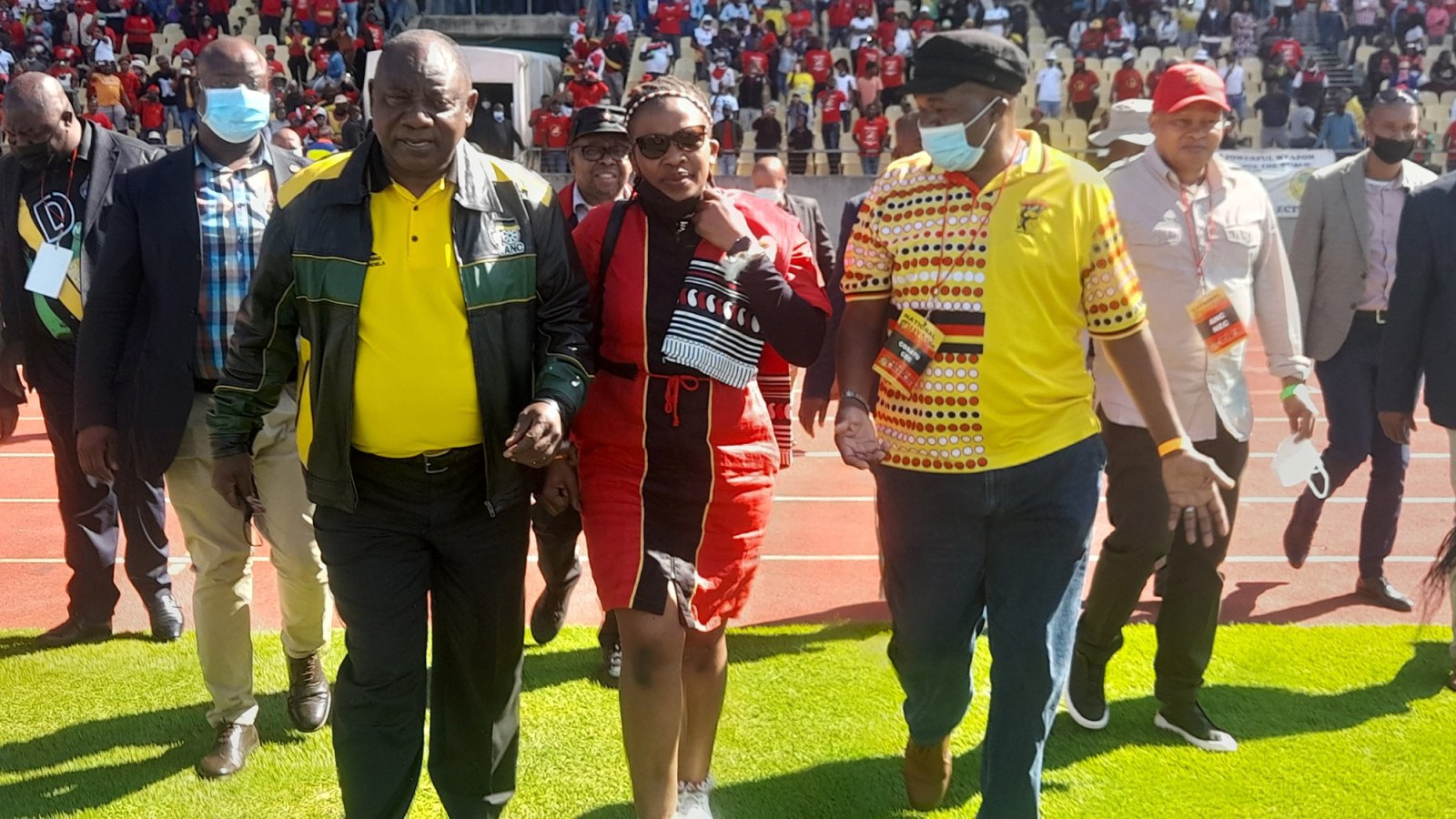 President Cyril Ramaphosa and Cosatu president Zingiswa Losi arrive at the May Day rally at the Royal Bafokeng Sports Palace in North West on 1 May 2022. (Photo: Twitter / @_cosatu)

President Cyril Ramaphosa was booed off stage during a May Day rally where he was supposed to address workers. Cosatu’s spokesperson said workers’ frustration with the government has been building for years.

President Cyril Ramaphosa being howled off the stage by workers in North West on May Day was regrettable but also an expression of workers’ frustration with the President, Congress of South African Trade Unions (Cosatu) spokesperson Sizwe Pamla told Daily Maverick.

Pamla said Sunday’s rally in Rustenburg was meant to gather workers to prepare them to fight for their rights because it was clear that no one was going to help them. Striking mineworkers, however, booed Ramaphosa off the stage, forcing him to abandon his speech.

“There were disruptions and we have to say that we find that regrettable because the people who were stopped from speaking were our invited guests. The general secretary of the SACP, comrade Blade Nzimande, and ANC comrade President Cyril Ramaphosa were the two people who could not deliver their messages of support,” said the Cosatu spokesperson.

He added that the current administration’s response to public servants was particularly disappointing considering that Cosatu backed Ramaphosa, a founding member of the trade union federation, to succeed Jacob Zuma in 2017 as ANC president.

Pamla said that after Ramaphosa became South Africa’s President in 2018, he began to “betray” public sector workers by “pickpocketing” their agreed-upon salary increases.

Four years ago, government workers signed a public service wage agreement that would allow them yearly increases that would take into consideration inflation and the extension of their housing allowance. The state reneged on the final year of the deal, a move endorsed by the Constitutional Court.

The public sector wage bill has shot up from R154-billion in 2006 to R682.5-billion in 2022, making it the largest component of government spending.

“In 2020, the government [backtracked] from that agreement in the public service, so that really frustrated workers. While in 2020 they wanted to do something about it, they couldn’t because of the lockdown that had happened.

“So, of course, they decided to try to litigate to try to win this in the court of law. When we realised that the courts were favouring the government, that really just [demotivated] us,” said Pamla.

He said public servants felt that they had been used as scapegoats for the country’s problems. He also stated concerns about an administration that Cosatu says has favoured corporate interests over those of public servants.

He noted that while the state refused to pay workers’ wage increases, the private sector had seen corporate tax being cut from 28% to 27%.

Those who booed Ramaphosa on Sunday were reportedly from the mining company Sibanye-Stillwater, where employees are currently on strike, seeking a R1,000 per month wage increase for three years. The company has offered an increase of R850 per year.

Pamla said Sibanye-Stillwater had one of the highest fatality rates and that unions had called for its closure until safety compliances were met.

He said Cosatu was instead told by Mineral Resources and Energy Minister Gwede Mantashe that the unions were “populists” and that Sibanye contributed a great deal to the country.

Ramaphosa told the hostile crowd that was booing him off stage that he would try to address their wage increase demands.

Pamla said he had hoped the rally would help establish common ground between workers and the government with regard to ironing out some issues.

“But, of course, you can’t police anger. It is regrettable that [Ramaphosa being chased away] happened the way it did. But we totally understand where that anger comes from because we have been witnessing that anger for the past couple of years,” Pamla said. DM