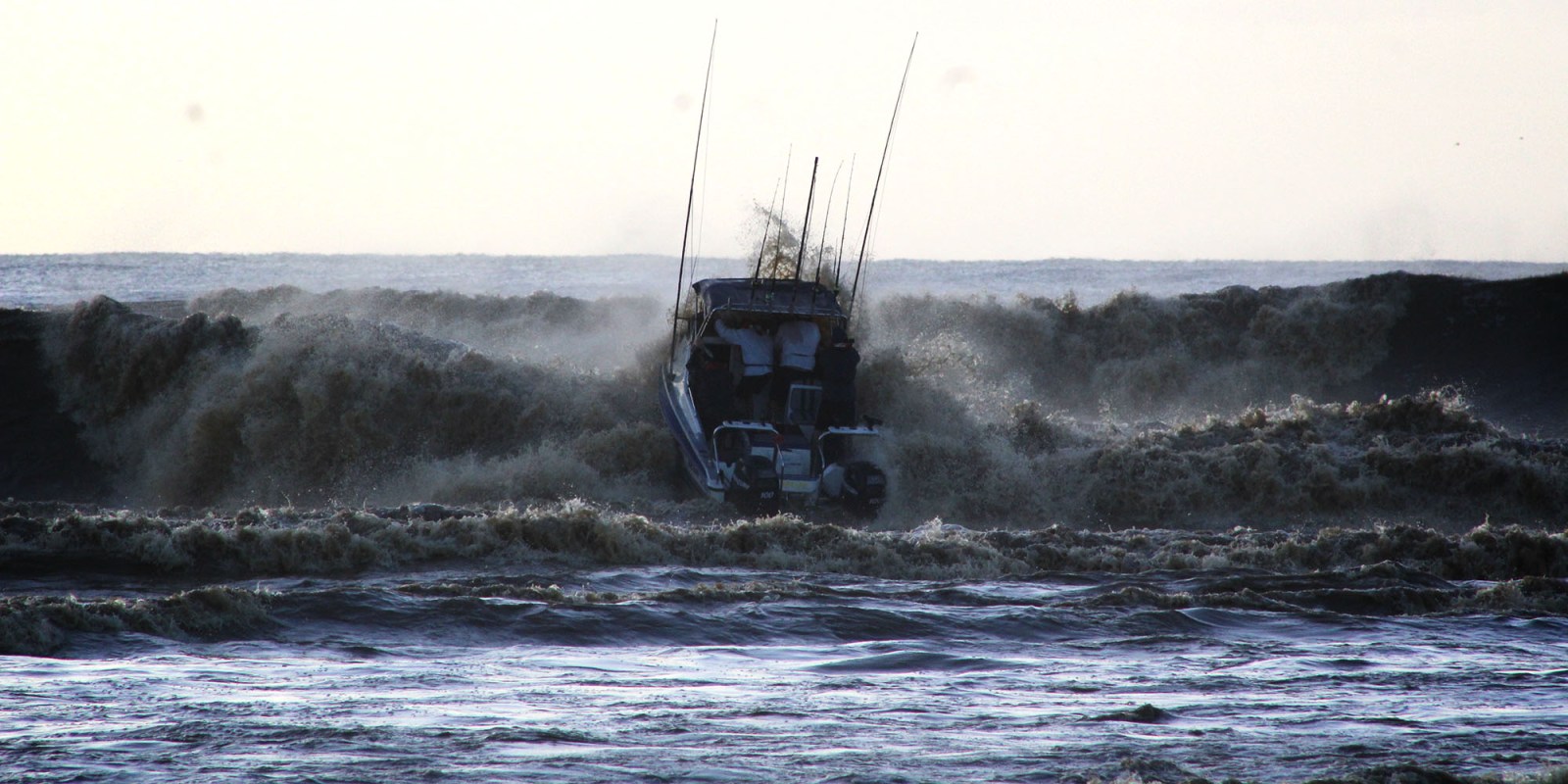 A ski-boat crew ploughs through the mud-stained surf at the mouth of the Lake St Lucia estuary on 28 April 28. The prolonged closure and increasing build-up of muddy sediments and back-flooding of nearby farms have generated heated debates. (Photo: Tony Carnie)

The government has opened the door to further artificial breaching of the Lake St Lucia estuary mouth and other short and longer-term measures to alleviate the flooding of subsistence farming plots and other social or economic impacts around the iSimangaliso Wetland Park.

The decision to sanction further “emergency” breaching of the mouth of South Africa’s largest estuary was announced in St Lucia village yesterday 28 April by Barbara Creecy, the national Minister of Forestry, Fisheries and Environment.

Creecy also released a 138-page report by an expert panel she appointed last year to investigate the controversial January 2021 decision by the iSimangaliso Wetland Park to artificially breach the mouth with earthmoving equipment.

While that decision was welcomed at the time by local commercial sugar farmers, subsistence crop farmers, anglers and other interest groups, it was slammed by several conservation groups and a group of seven estuarine scientists who described it as a major setback to recent attempts to restore the natural functioning of the 70km lake system after decades of human interference around the estuary.

The high court also ruled in 2018 that the mouth of the adjoining Umfolozi River could no longer be breached artificially to alleviate back-flooding of farms on the river floodplain.

The panel, chaired by marine biologist Dr Nasreen Peer, has now recommended that iSimangaliso should be allowed to continue artificial breaching under “emergency” conditions — though a clear definition of what constitutes an emergency or exceptional circumstances still has to be developed further.

However, this recommendation does not provide carte blanche to the park authorities to breach the mouth at will at the request of farmers or other groups who have been pushing for the mouth to be kept permanently open to the sea via artificial dredging and other means. Nor does it appear to be a complete reversal of more recent efforts to restore the natural functioning of the mouth as far as possible.

According to the panel report: “When emergency conditions develop demanding urgent breaching, some of the Estuarine Management Plan prescriptions can be waived (but compliance to National Environmental Management Act section 30 should never be waived), however this must be monitored constantly, and communicated to affected and interested stakeholders. A breaching report must be produced and form part of the annual reporting. It must carry as (much) detailed information as possible including motivation, and processes followed.”

Though some farmers and the St Lucia Business Forum have welcomed the panel’s main decision to sanction further artificial breaching, Creecy nevertheless faced a barrage of criticism and demands for “immediate” action to drain more water from the Umfolozi floodplain by visibly angry subsistence farmers from the neighbouring Sokhulu, Dukuduku, Zwenelisha and Enkanini areas.

Many complained that their crops of bananas, potatoes, madumbes and other vegetables had been flooded on a regular basis over recent years due to the natural closure of the estuary mouth.

The review found that the breach was contrary to the Global Environment Facility (GEF) scientific team recommendations that no artificial breaching should occur.

However, iSimangaliso Wetland Park Authority had performed the artificial breaching “within the mandate as approved through their Maintenance Management Plan, authorised by the Department of Forestry, Fisheries and the Environment, and in line with the prescriptions of related legislation.”

The panel found many ecological reasons would justify the breach including the prolonged closure of the system from the sea — including the concern over accumulated sediment in the lake system; the presence of alien invasive species; a decrease in biodiversity within the system; and a decrease in the nursery function of the estuary.

“Importantly, the review is critical that the Estuarine Management Plan makes no mention of socio-economic factors in its definition of exceptional circumstances, despite several social and economic concerns associated with a prolonged closed mouth state.“

Not considering these socio-economic factors “contributed to community-conservation conflict in relation to the management of the mouth as most stakeholder groups seem to require the St Lucia system to function in one specific state”.

“However, it is important to note that St Lucia as a dynamic system cannot and should not be confined to one ideal state.”

It had recommended that maintenance breaching could continue in “exceptional circumstances”.

“However, the exceptional circumstances — ecological or social— for future maintenance breaching must be clearly defined before any further action. While it is clearly understood that the GEF report advises against breaching, it is practical and necessary to consider the effects of allowing the mouth to remain closed.”

As a result, the panel recommended that iSimangaliso develop and intensify an in-house monitoring plan and build the capacity to collect monitoring data. This should include both biodiversity monitoring and socio-economic data on the effects of the lake system function.

“The Panel notes that future breaching should not take place without adequate ecological monitoring before and after the event, to ensure the most efficient breach in terms of the intended objectives as well as potential socio-economic reasons. Continued intensive monitoring would also allow for a more adaptive management strategy which is more suitable for the dynamic St Lucia system.”

“To assist with relief to farmers in the uMfolozi-Msunduzi floodplain as a result of back-flooding, the report recommends clearing the Msunduzi and beach channel of vegetation and sediment to allow water to flow freely from the floodplain to the mouth. “

The panel further recommended “urgent improvement in communication between the management of Isimangaliso and stakeholders” including communities, to allow stakeholders to better understand management decisions.   This should include translating technical documents into an easily understandable format.

“The Panel states that moving forward, it is clear that the St Lucia Lake, protected and managed by iSimangaliso Wetland Park Authority, can no longer be managed as an isolated system. Activities in the floodplain and catchment areas of the feeder rivers contribute to the health of the St Lucia system. As such, the Panel recommends the development of a comprehensive Reserve Determination of Ecological Water Requirements be developed.

“In conclusion, let me say once more that the Department and I are committed to offering solutions that will safeguard the heritage in iSimangaliso, while also supporting the livelihoods of communities in and around the Park.

“This report has to be the beginning of a new chapter of collaboration and working together in the sustainable management of the St Lucia estuary.”

The report is available on the Department of Forestry, Fisheries and the Environment website. DM/OBP