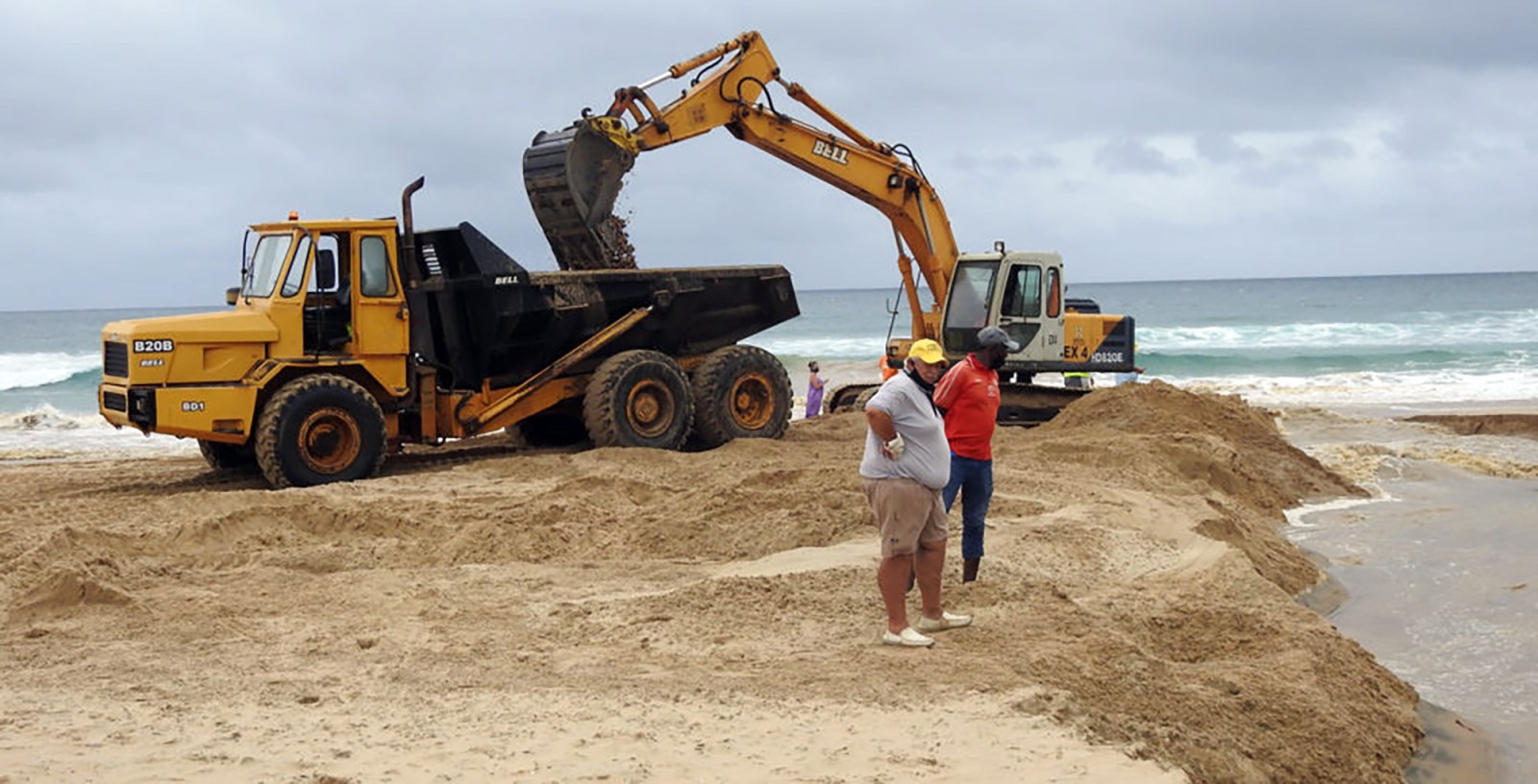 Residents and contractors keep a close eye on the progress of the breaching of the Lake St Lucia mouth. (Photo: Supplied)

In the wake of the controversial bulldozing of the Lake St Lucia mouth, Minister of Environment, Forestry and Fisheries Barbara Creecy has taken action, announcing that an independent scientific panel will be appointed to probe what happened – and also advise on what should be done to guide future policy decisions.

But several estuarine and hydrology experts and environmental groups reacted with dismay to this artificial manipulation of ecological processes, demanding answers from Minister of Environment, Forestry and Fisheries Barbara Creecy about what they saw as a major blunder and inexplicable policy volte-face by the iSimangaliso Wetland Park Authority, statutory guardian of the World Heritage Site.

While estuarine river mouths are dynamic systems which are alternately blocked or open to the sea according to natural water cycles, the St Lucia system was managed artificially for nearly six decades from 1952 onwards – largely for the benefit of nearby sugar farmers, anglers and holidaymakers visiting the village of St Lucia.

The manipulation involved permanently diverting the course of the giant uMfolozi River, bulldozing the mouth open on a regular basis and also dredging a channel for ski-boats and other watercraft.

But that all changed about 10 years ago when a team of hydrologists, ecologists and estuarine experts advised iSimangaliso to stop meddling with natural processes, while also warning that the lake was drying up steadily because the diversion of the uMfolozi was robbing the lake of more than 50% of its previous freshwater flows.

iSimangaliso commissioned a series of ecological, social and economic studies to examine the impacts of the new “hands-off” approach to future management of the system, and defeated two major court challenges by sugar farmers who feared the new approach would lead to more frequent flooding of cane fields established in the flood plain of one of South Africa’s biggest rivers.

The end result was that millions of rands of funding was sourced from the World Bank’s Global Environmental Facility (GEF) and other sources to reconnect the uMfolozi to Lake St Lucia and remove millions of tons of sand and silt that had been deposited near the estuary mouth by decades of artificial dredging.

But on 6 January 2021, everything changed again when iSimangaliso brought in several large “yellow machines” to break open the mouth – seemingly in direct contradiction to the newer hands-off management policy where the mouth would be allowed to breach naturally once sufficient levels of fresh water in the lake and feeder rivers pushed open the sand bar.

Now, in response to a series of reports in Daily Maverick and an open letter by seven expert scientists and other groups, Creecy has moved to address the controversy by appointing an independent scientific panel.

“The Minister has noted widespread public interest in this matter, as well as differing scientific views on the most ideal management strategy for the conservation and preservation of this significant World Heritage Site,” her department said in a statement on Tuesday.

“Accordingly, after consultation with the iSimangaliso Wetland Park Authority, the Minister has decided to appoint an independent scientific panel to advise on:

The department said the names of the panellists would be made public once the appointment process was concluded.

In her statement, Creecy also confirmed that in response to her request, she had received a formal response from the park authority last week indicating that the decision to reopen the mouth followed discussions at a multi-disciplinary symposium hosted by iSimangaliso last October.

The symposium had acknowledged that the St Lucia Lake system was a complex and dynamic socio-ecological system, and that its natural functioning was critically important – but that it had also been necessary to set up a multi-disciplinary task team to discuss the “best adaptive management strategy for the estuarine system” and to remove “the unnaturally high beach berm so as to allow the system to breach unimpeded”. DM