Charge those responsible for death by global heating with ‘Democide’ 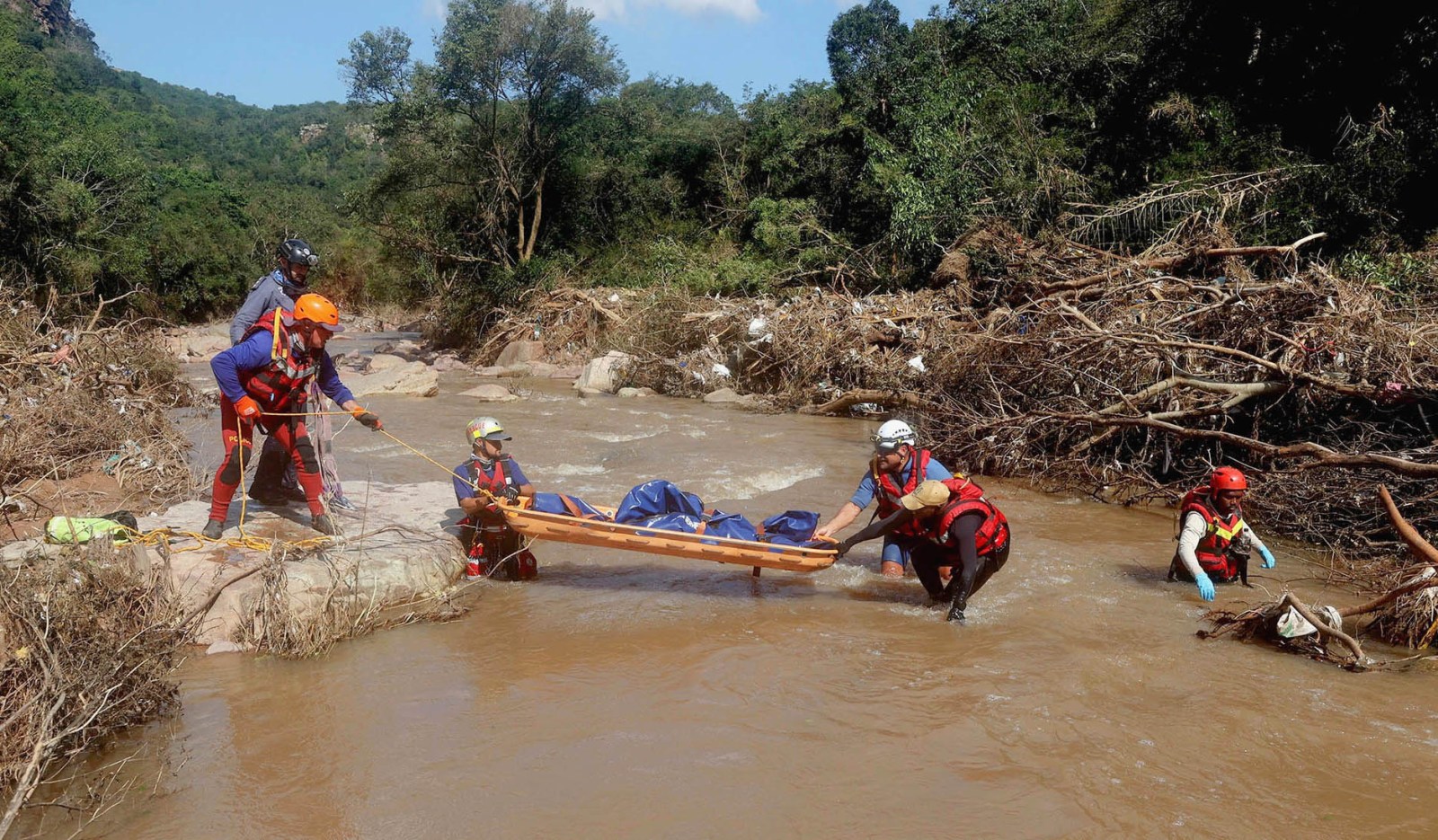 A search and rescue team recovers the body of girl child ageing between 4-6 years at the Umzinyathi Falls near Durban, South Africa, 19 April 2022. Key roads in the area have been damaged and mudslides destroyed houses. The South African National Defense Force has been called to assisst in the recovery after the worst flooding in 60 years. 443 people are confirmed dead with over 40,000 displaced. (Photo: EPA-EFE/STR)

What word can describe politicians who, despite having all the evidence and the means to mitigate a “natural disaster”, still knowingly do too little to avert that catastrophe? Democide.

Last week, members of the Climate Justice Charter movement laid charges of culpable homicide against several top government officials, including President Ramaphosa. They say the charges are warranted because the government has failed to take measures to mitigate the climate crisis, despite multiple warnings of the dangers of global heating.

The charges against the president and the likes of Energy Minister Gwede Mantashe and Environment Minister Barbara Creecy are serious.

This case should raise an important debate about accountability, culpability and consequence for the violence of inaction – a debate that will only grow more relevant as the climate death toll rises. In this vein, I’ve been searching for the right word to describe and assign the culpability for elite inaction on the climate crisis.

My search intensified after the Durban floods. Well over 400 deaths and rising, more than 60 of them children. Most of them are poor and black people. Their deaths were predictable and preventable (as explained here: Explainer: Why KZN was flooded and why it’s likely to happen again).

After the experience of Nazism and World War 2, it took activists and lawyers to develop and usher into international law terms like “genocide” and “crimes against humanity” that could capture the gravity of the crimes commited and frame them as violations of fundamental human rights. They had lived through the Holocaust against Jewish and other peoples, and vowed “never again”.

Years later, the return of genocide in countries like Rwanda and Bosnia made us familiar with the much older practice of “ethnic cleansing”. We vowed “never again”.

I recently learnt of the word omnicide (meaning “the destruction of all life or all human life (as by nuclear war”) after reading Amitav Ghosh’s profound book, The Nutmeg’s Curse. Ghosh and others argue that omnicide is what human economic activity is now doing to all living things: birthing mass extinctions that may eventually include our own.

After we have committed omnicide, there will be no more opportunities for “never agains”.

Some may ask whether comparing the loss of life from climate change with that of genocide and ethnic cleansing is exaggerated and distasteful. I don’t think so.

In 2021 reputable researchers estimated that there are already five million climate change related deaths a year. There is also the unquantified pain and suffering accruing daily to tens of millions of climate migrants and refugees. Across the world most of the people suffering are poor, black and brown people. So what word should we use?

What word can describe politicians who, despite having all the evidence and the means to mitigate a “natural disaster”, still knowingly do too little to avert that catastrophe? What word describes politicians who – while acknowledging that climate change is an existential threat to everyone – also know that it will primarily be borne by the poor? As long as the Rome that is burning is somebody else’s, they fiddle and delay decisive action.

The best I can come up with is democide (from the Greek “dēmos”, the people, and “-cide”, to kill), meaning: “the killing of members of a country’s civilian population as a result of its government’s policy, including by direct action, indifference and neglect”.

Democide: alternatively, the random preventable loss of life of people who are vulnerable to natural disasters because they are denied basic human rights, like access to housing or income, that would protect them.

In other words, a form of mortal inequality that follows upon other inequalities. If we accept that what we are witnessing is democide, we can better understand what is happening in KwaZulu-Natal.

At a micro level, the Durban floods are a form of “democide”. Poor people died because elite people used public resources that were meant for safe housing, sanitation and upgrading infrastructure to buy expensive cars and homes and to pad illicit offshore bank accounts.

At a meso level, people in Durban died because our government and business leaders are failing to move swiftly enough away from fossil fuels and because they have ignored warnings issued by organisations like the Climate Justice Charter movement about the deadly impact climate change will have.

At a macro level, people in Durban died because fossil fuel companies like Shell, their shareholders and the governments they have captured are actively lobbying to maintain the status quo and thus their profits. This, despite indisputable evidence from local and international scientists that the type of “rain bombs” experienced in Durban will exact a deadly toll on people who live in informal houses and on flood plains.

Beyond a reasonable doubt?

Truth be told, there is an unbroken thread of causality between the baby found dead on the Isipingo beach and the blended failures of policy and theft that progressively led to his death. Further, although it garnered our sympathy because it’s in our own backyard, what happened in eThekwini should not be seen in isolation from the effects of global heating on other vulnerable towns and cities along the southeast African coast.

Storms and cyclones such as Idai, Eloise, Ana and Batsirai have taken hundreds of lives in the last two years. But those people are not in the line of sight of TV cameras (and they’re poor), so they are out of mind and more easily overlooked.

Without the right word to describe the crime, who do we hold responsible?

Unfortunately, even with a word – democide – there’s one more problem to confront. We live in a world of burgeoning impunity. Carefully constructed rules of international human rights law, even if selectively adhered to, are being tossed aside by many governments and multinational corporations.

So are these types of questions of any value if there will never be consequences for those in power? Is it worth debating moral questions in an amoral world? The answer has to be yes!

If we give up on accountability while we are only on the edges of the coming storm, then we throw away not only our own humanity but that of everyone else. The flip side of democide still remains participatory and substantive democracy.

But, as I have argued in another article recently, (Five million deaths a year and rising – what are you doing to save my f*****g life?), we should use freedom to its fullest or lose freedom in its totality.

The choices are getting starker with every passing day. DM/MC

Charge those responsible for death by global heating with ‘Democide’