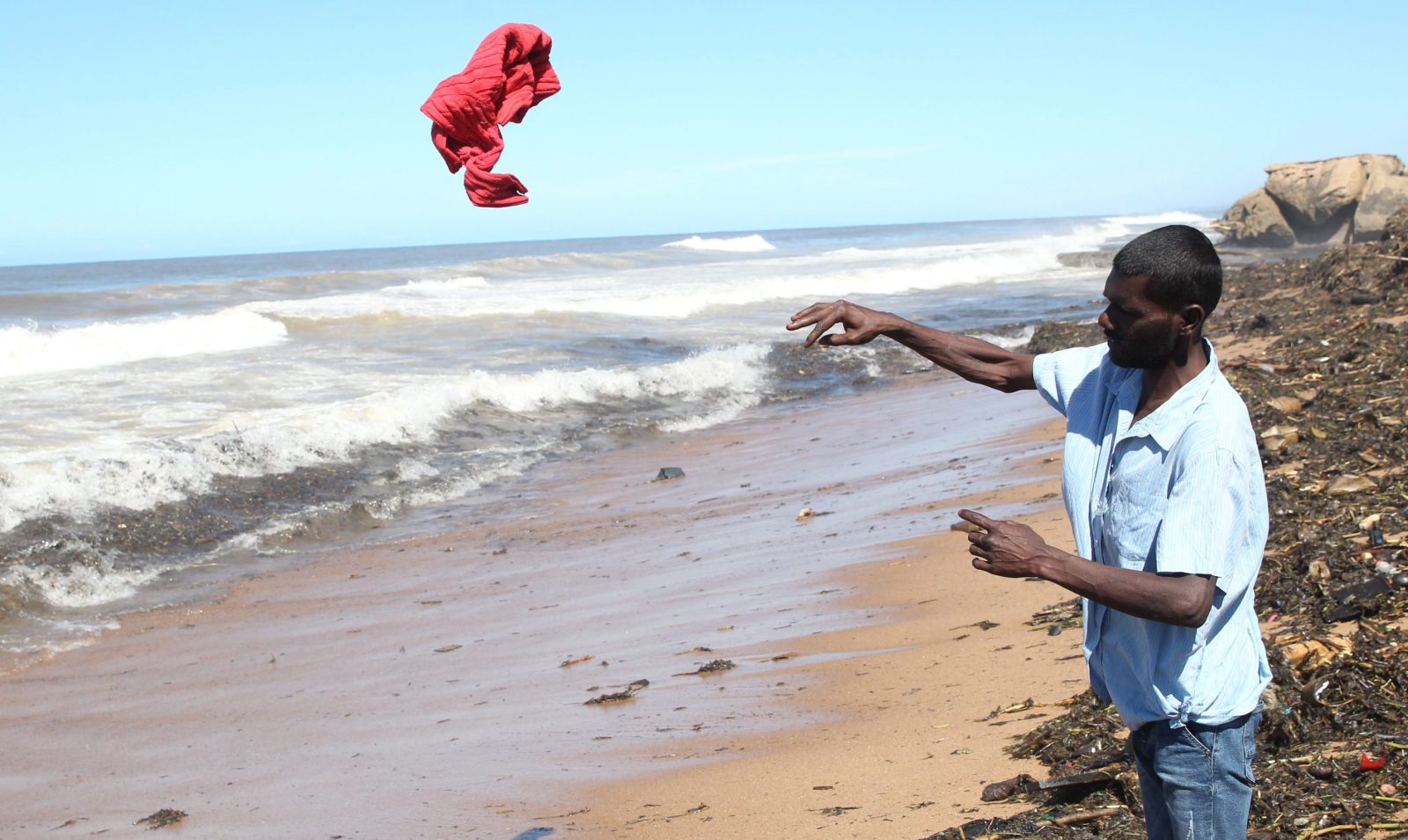 Lawrence Naidoo of Isipingo beach throws away the jersey he used to cover the body of a baby that was washed out by the sea on Wednesday. Photo:Mandla Langa

Authorities search for relatives of baby boy found on Isipingo beach after devastating floods that have killed over 300 people.

Among the debris Lawrence Naidoo saw what looked like a toy.

A large doll he could give to his seven-year-old daughter Lisa, who was close by, helping him collect plastic bottles on a cloudy Wednesday morning at 7am.

But when Naidoo reached out and felt the weight of the toy he realised in his hands was a dead baby.

It is the image of this naked baby, on Isipingo beach in KwaZulu-Natal that appeared in Daily Maverick on Thursday. Its publication has caused some controversy, but the tiny body has become a symbol of the floods that have left over 300 dead and countless people missing in South Africa.

Naidoo lifted the baby in his arms and carefully carried the boy higher up the beach.

As he walked all he could think of was of his five-year-old son Lorenzo. It was for that reason he took off his red jersey and wrapped it tightly around the baby to protect him from the sun, as they waited for the police to arrive.

“I thought, what if this was my son, and someone found him like this. I would want them to do this,” said Naidoo.

It was only after 4pm that the baby was finally taken to the mortuary.

Shortly after the baby was found, photographer Shiraaz Mohamed arrived on the beach, having been tipped off by a source.

He took a few photographs and left.

His photographs, published by Daily Maverick on Thursday, have divided readers.

Some felt they were too gruesome to appear, while others believe it brings home the magnitude and horror of one of South Africa’s worst-ever flooding events.

A day later, Mohamed said he believed that it was right for his picture to be used as it was. “We can’t just say the floods are bad, we need to show what is happening and that is my job. And if it makes a difference in someone’s life then I am happy,” he explained.

As yet the baby is unidentified, say the police, but some in the area suspect he was washed down the nearby Mbokodweni River, when the floodwaters came earlier in the week.

It is a river that snakes its way along the border of Umlazi, then cuts into the interior passing through places like Millerton and KwaNdlovu. It is a large area and many people live close to the river.

“We don’t even know if this child’s parents are even alive,” said local resident Keshni Velan.

To help find the child’s parents Velan had posted messages on community WhatsApp groups. By Thursday no one had come forward.

The sea was holding more of the dead on Thursday morning. A friend of Velan had gone fishing on a boat and contacted her to say he had seen two bodies out at sea. They alerted the police. “There are just so many people who are missing at the moment,” sighed Velan.

Already the process of identifying the baby boy has begun. “We believe the baby to be a year old and we are appealing to parents and relatives to go to the Isipingo SAPS,” said Lieutenant Colonel Nqobile Gwala.

Identifying the baby is likely to be a difficult task for an over-stretched police force dealing with the floods. A forensic anthropologist who has worked extensively with identifying the dead said there would be two ways to go about it. “You can identify through facial features or use DNA. There will always be people looking for a baby,” said the anthropologist who didn’t want to give her name as she is not authorised to speak to the press.

She suggested that the length of the Mbokodweni River be walked and people asked if they knew of a missing baby.

The day after the baby was discovered Naidoo was back on the beach, looking for bottles.

Lisa and Lorenzo, as usual, were helping. He used to fish and sell what he caught, but the debris churned up by the flood cut the fishing line, and there is oil in the water too.

Through the night the image of the dead boy with the wound to the left side of his head wouldn’t leave him. He was hoping for news that the boy’s parents had come forward, but nothing yet. And on the beach was a further reminder. The red jersey he had so carefully wrapped the baby in lay in the sand, where police had left it when they came to remove the body.

With that, he walked to the water’s edge and threw the jersey as far as he could. It disappeared quickly below the waves.

“Let it go, it needs to let go,” he said, as he walked back to Lisa and Lorenzo. DM